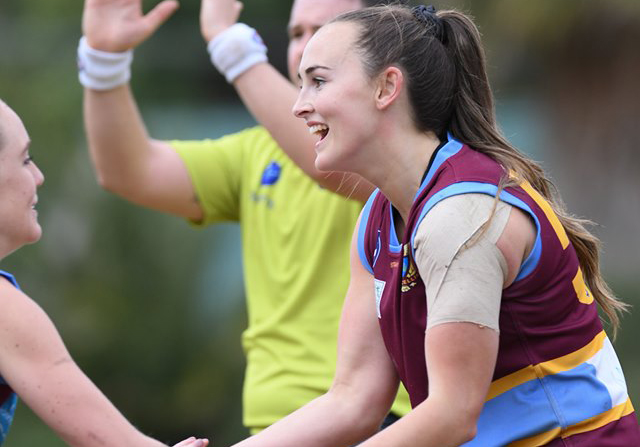 The final Big V women’s squad has been announced ahead of Saturday’s match against AFL Goldfields at Elsternwick Park.

24 players will represent the VAFA as they try to make it two consecutive wins over the Goldfields, 14 of whom will be wearing the Big V for the first time. Sasha Long (Beaumaris), Irena Maliaris (Caulfield Gr.), Christine Nancarrow (Collegians), Maggie Antypas (Marcellin), Shaylee Taylor (Marcellin), Tessa Zagontinos (Marcellin), Cat O’Brien (Old Brighton), Rhiannon Green (Old Camberwell), Imogen Barnett (Old Trinity) and Sarah Cameron (SKOB Saints) have been recalled from either the 2017 or 2018 squads.

Long, Zagontinos and Cameron have now been named in all three Big V women’s teams since 2017.

Unsurprisingly, Old Trinity has the highest number of representatives after their 7-1 start in William Buck Premier with Barnett, Vanessa Murphy, Grace Dillon and Sally Peers all named. Peers is an inspiring selection after carving out a career representing Australia on the international tennis circuit.

Marcellin is next in line with three players in the team, while Madison Lister (Glen Eira) has earnt selection as the only player from Division 4. Lister commenced her football journey in 2008 with the Melton Juniors in the Riddell District FL and has since represented Vic Metro at the AFLW National Championships while playing TAC Cup Girls and VFL Women’s.