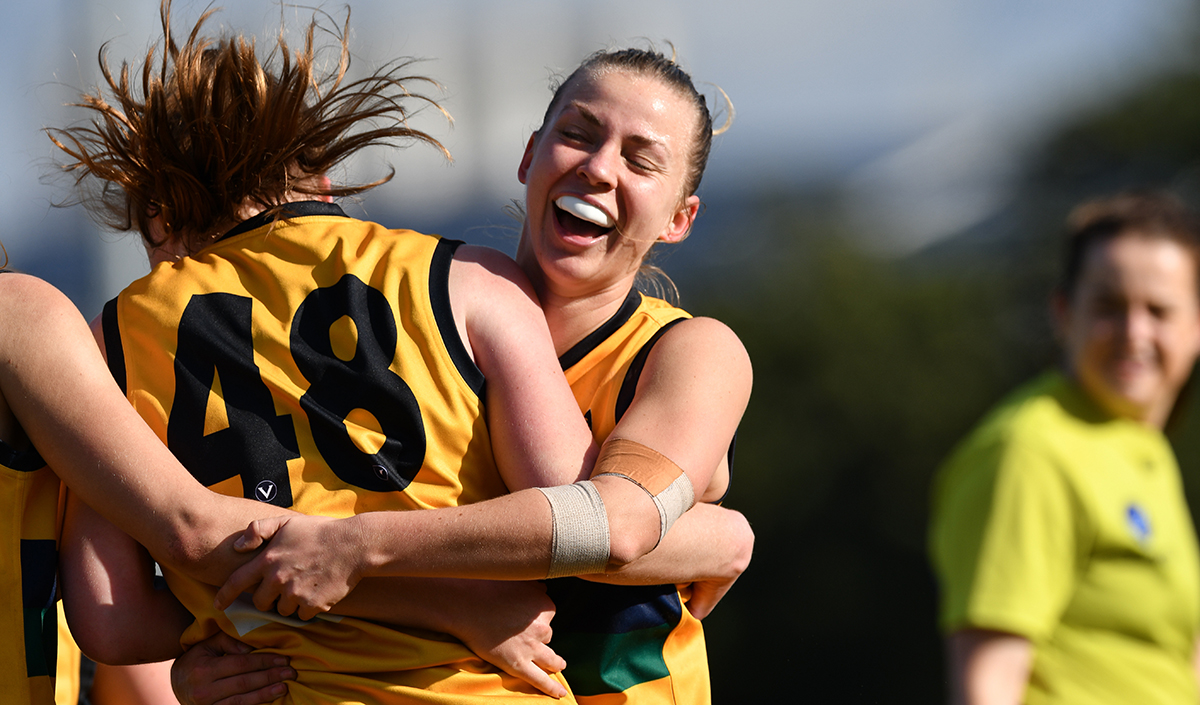 In an historic evening at Fitzroy-ACU’s Brunswick Street Oval, our first ever Friday night William Buck Premier Women’s football match took place between the home side (7th) and West Brunswick (2nd), with an impressive final term enabling a seven-point win to the Westies. You’d be forgiven for thinking there was a strong breeze favouring one end of the ground if watching the live stream as the Roy Girls were able to trap the ball in their forward 50 for the majority of the opening term before the Westies wrestled back with a similar effort in the second. Despite the Magpies registering nine i50’s in the second, compared to Fitzroy’s two, an important set shot goal from forward Liz Olney (1) gave the Roy Girls a 5-point buffer going into the main break. After a stalemate third quarter, West Brunswick well and truly hit their straps in the fourth, dominating near-on every stat and sealing the win in the final moments. In a match defined by both teams’ ferocity around the contest, the Westies’ Mel “Mustang” Lindsay (2018 Premier B Blue B&F winner) stood out with her phenomenal 18 tackles and 17 disposals, while Big V star Yo Jones, and Katherin McFadyen (16 disposals, 5 i50’s), were also damaging. For the Roys, who could potentially see this as an opportunity gone begging, Teresa Zampaglione backed up her BOG Big V performance with another enviable outing here (15 tackles, 16 disposals, two i50’s), while Alex Monteiro mirrored her defensive pressure with 15 tackles and 13 disposals of her own.

In what would be penned as the upset of the round, SKOB Saints dealt Old Trinity (1st) their first blow since Round 3 at Righetti Oval. The 16-point victory, which could of hypothetically been greater still if not for scoreboard inaccuracies (3.8-26), was a testament to the Saints’ ability to maintain possession in their forward half (33 i50’s to OT’s 17) and apply significant defensive pressure when the ball turned over – epitomised by the T’s only goal being kicked halfway through the final term via Big V representative, Imogen Barnett (1 goal, 16 disposals, 34 hit outs, 6 marks). For the victorious Saints, who would be thrilled to have kept the in-form T’s to their lowest score of the season, Margie Gleeson (1) was fantastic with 18 disposals and six tackles, as was Eliza Stafford (1 goal, 17 disposals) and Bree Doyle. For the T’s, who still sit on top of the ladder, Vanessa Murphy continued her Big V BOG form with a fantastic 24 disposal match and Lucy Aitken provided able support with 20 of her own and seven tackles.

With no goals scored by either side to 3QT, it was a two-goal straight final term, off the boot of Emily Roos, which saw St Mary’s Salesian deny Melbourne University their first win of season 2019 by way of an 11-point margin. Minor scores were on the menu for the majority of the match, and despite trailing in most statistics for the best part of the day, the Mugars managed to enter the last quarter with the slimmest of buffers (1pt). This lead, although slight, was a credit to the work-rate of Candice Adams in the ruck (39 hit outs, 13 disposals) and Nadia Moore (18 disposals, 7 marks), in what was her first match for the Uni side following her local release from North Melbourne Tasmanian Kangaroos (VFLW). In their fourth consecutive victory, Big V representative Stephanie Lawrence, was named best thanks to her 17 disposals, as Jennifer Lew (26 disposals) and Alice Angley (18 disposals) also had plenty of it. With this result in hand, their fourth consecutive victory, the Saints remain a looming threat in third spot on the ladder, and with a healthy 123.17%.

Marcellin bounced back in style following their Round 8 loss to St Mary’s with a strong 16-point victory over Kew at Bulleen Park West on Saturday. Keeping the Bears goalless in the opening term was a powerful statement from Marcellin, but Kew managed to go one better in the second by keeping the streaking Sheagles scoreless while they racked up two majors through Eilish Boyd and Jasmine Mikovic to enter the main break with a single-goal superiority. The Sheagles jostled back into the contest in the third term, taking a two-point lead into the final change of ends, before going on to showcase yet another enviable final quarter – kicking away with 2.2 and holding the Bears at bay. For the winners, Laura Robertson was hard-at-it with 22 disposals, eight tackles and five i50’s, as were teammates Shaylee Taylor (3 goals), Olivia Dikranis (17 disposals, 7 tackles, 6 i50’) and Madison Taylor (17 disposals, 6 tackles, 3 i50’s). In her first game back since Round 2, Dani Calautti (14 disposals) shone for the Bears with her elite work-rate, while Esther Potts (17 disposals) and Isabelle Harding (11 disposals, 4 clearances) were able in support.