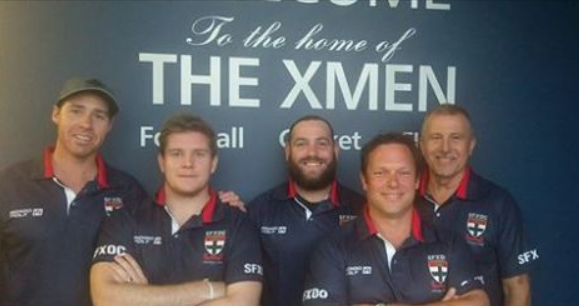 Originally published by the Pakenham Gazette

After a crushing wooden spoon in 2017 and a lack of committed players, the St Francis Xavier ‘X-Men’ have undergone a rebuild both on and off-field in an aim to once again be a power club in the VAFA.

With a new president and new committee brings a confidence that 2018 will be a big year for the club.

New president and 2015 premiership player Wayne Delaland is both excited and nervous about how far the group can go.

“Having been at the club for seven years (and 100 game player), I have experienced the highs of premierships, multiple finals appearances and the lows of league demotion, lack of playing numbers and a wooden spoon in 2017,” he said, honestly. “We are a proud club and have a history of success.”

The 2017 season left a sour taste in the mouths of many, especially with Delaland. “There are certainly parts of the club that we didn’t handle well and this attributed to low morale and poor results,” he said.

“I’d be lying if I said I wasn’t nervous about being a first-time president. There are many parts of the role I’m yet to learn but my committee and I will accept the challenge of getting us back to finals and higher divisions.

“When we won the Division 4 premiership in 2011, the club had strong leadership at all levels; president, committee, coaches and playing group. If we are going to return to that level of success, I knew we had to get the best people to the club, from a coaching and committee level.”

The first change came with new coaching appointments in both grades. Scott Mackenzie was appointed senior coach, having built successful teams at Hallam. He has brought new blood and a real sense of belief to the X-Men and is very clear on his goals for the club, particularly being so passionate about player development.

“Scott is a great communicator and we know he has the ability to develop players at all levels,” Delaland said.

“The club believes Scott can make good players great, and work with our young group to develop them into senior footballers.

“Scott understood our club and the importance of creating a competitive but welcoming culture. Most coaches will focus on the players they can bring with them, whereas Scott is eager to work with our core group of players, most in the age bracket of 24 to 28-years-old.”

Josh Lafranchi has taken up a senior assistant’s role alongside Mackenzie after coaching the X-Men in 2017. With a decorated playing career in local leagues, he will work closely with player development.

David Antonielli has returned to St Francis as reserves coach, having won a best and fairest at the club in 2011.

With the club averaging 40 players at pre-Christmas training sessions, the signs are looking promising for 2018.

“Our training numbers are increasing and there is a real buzz around the club,” Delaland said.

“This level of excitement hasn’t been felt since our 2011 (Division 4) premiership year.

“We are seeing a mix of new and existing players, which brings a confidence that the X-Men are finals bound once again.”

The club is also seeking new sponsors and would welcome a conversation with any interested businesses. The X-Men are looking to revamp their club with upgraded playing facilities and clubrooms and any support would be appreciated.