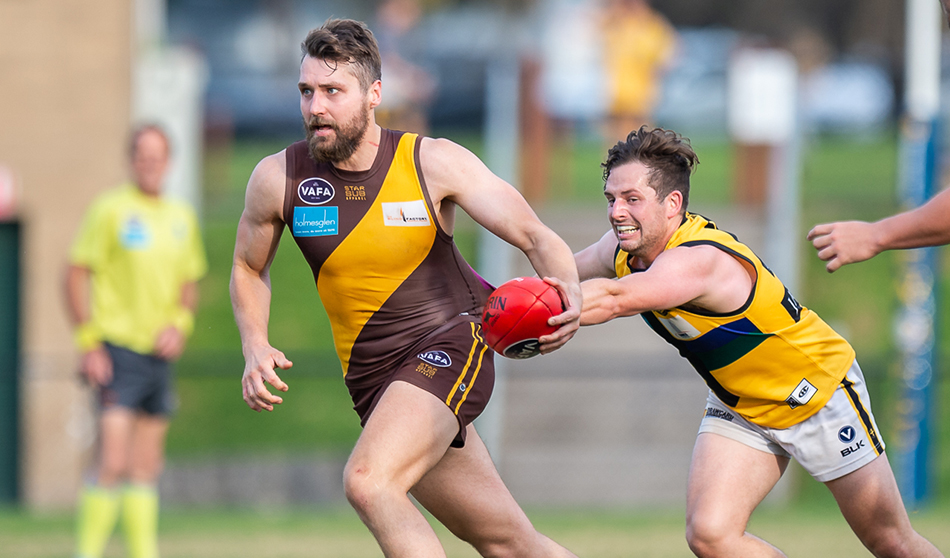 With three of the five games decided by three points or less, Division 1 Men’s was the section to follow in Round 4.

Brunswick fell agonisingly short of their first win of the season as Therry Penola held on by the slimmest of margins in a one-point thriller at Gillon Oval. The Lions shot out to a 27-point lead at the first break on the back of five goals to one before the NOBS mounted their comeback and reduced the margin to five points at the final break. It was a goal-kicking expose in the fourth quarter with the Lions’ four goals just enough to edge out their opponents. Jacob Gough was best afield for the Lions while Kane O’Halloran kicked four goals and took his season tally to 11 from three games. David Royle and David Marchione slotted three each for NOBS, with the latter named in the best for the third time this year.

Moving on to the two-point finish, and it was Prahran Assumption who came from the clouds as they defeated Oakleigh at Scammel Reserve. The Two Blues, sitting in third spot on the ladder, were wayward in the opening half with 2.12 and trailed the Krushers (8.3) by 27 points. It was a different Prahran side in the second half as they straightened up with 8.8 and got over the Krushers in the final term. Joel Hume was a standout for the Two Blues with a BOG display alongside Matthew Clifford and Rory Brodie. Liam Gillard was the best of the Krushers for the second time in three games and star full forward Aaron Cloke took his goal kicking tally to 18 after booting another three.

In the third and final ‘close one’ in Division 1 this weekend, Whitefriars held on against a fast-finishing PEGS by just three points at Whitefriars College. It was goal-for-goal in the first half and one point separated the two sides at the main break before the Friars piled on six goals to two in the third. PEGS, however, weren’t done with as they stormed home with another five goals, only to fall short against the valiant Friars defence. A screamer one week and a bag of six goals the next, it was a day out for Daniel Wood as he took his tally to 14 from four games, while Benjamin Kelsey was named BOG. Mitchell Gleeson and Riley Simmons nailed four each for the Bombers as they now sit fifth on the ladder and one spot below the Friars.

Unsurprisingly, it was the two undefeated ladder leaders who didn’t allow their games to be decided in the last few minutes, with Old Camberwell launching a six-goal to one first quarter assault against Old Peninsula and running out 52-point winners. While the Pirates certainly improved after the main break, the Wellers were far too strong on the back of standout performances from Lachie Powell and Finegan Sampson. Powell, who was best-on-ground, has been named in his side’s best players in every game this year. Mikey Mclellan and Thomas La Brooy fought hard for the Pirates as they slump to their third loss of the season. The Wellers sit on top of the ladder with a percentage just shy of 200.

Nine individual goal kickers helped Kew FC to their fourth straight win to start the season as they defeated St Mary’s Salesian by 67 points at Victoria Park. The Bears kicked 11 goals to two in a dominant opening half before the Saints evened things out with seven to six in the second. Billy Shute led a chorus of terrific performances from Kew alongside Michael Hannan, Lachlan James and Nathan Sambevski who each kicked three. Lachlan Morrey was sharp up forward with four goals for the Saints and Ananth Pathirana continued his strong form.