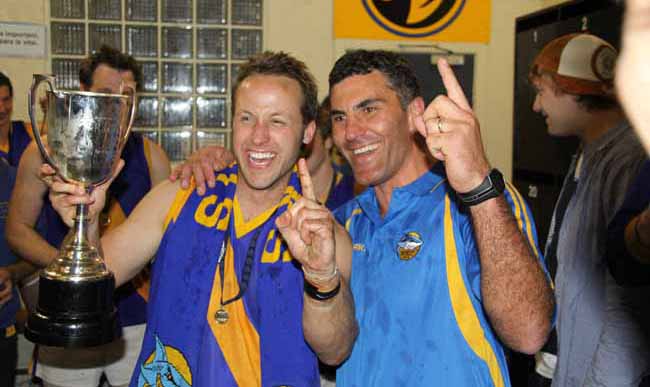 It’s been 10 years since Beaumaris pulled off one of the greatest grand final comebacks in VAFA history, but the moment is still very clear in the mind of the man who orchestrated the extraordinary one-point victory.

Jason Mifsud, the Sharks’ longest-serving coach and the mastermind behind the 2010 Premier C Grand Final win, recently spoke on the VAFA’s ‘Clubs in Focus’ Podcast about the day his Sharks came from 45 points down at quarter time against Caulfield Grammarians and snatched the historic premiership.

“You’ve got two heavyweights in the centre of the ring just landing blows on each other,” he said.

When Mifsud first arrived at the club in 2008 following a recommendation from former St Kilda coach Grant Thomas, he and assistant coach Craig Tonkin made two conscious decisions; to train the team in game-based scenarios and to empower the leadership group by inviting them to sit in, and contribute heavily, to team selection.

These decisions paid off handsomely two years later when the team recorded seven wins by less than 10 points.

“We had a track record of hanging in,” Mifsud said.

“When you train scenarios and you get matchday affirmation, the players just believe in it. It could actually even be the wrong player, but if the players believe in it then it ends up being the right one.”

“I wasn’t playing, and I used to say if you’re going to run out with a guy you want to make sure you can trust him,” he said.

“They really just owned the responsibility that we empowered them with and it’s the strongest on-field leadership group I’ve ever seen in my whole career. And that paid off for us in the grand final because they essentially took control of the game at quarter-time.”

After edging past Caulfield and claiming the minor premiership, the Sharks were initially unable to secure a grand final spot after losing to the Fields in the second semi-final. As had been the case all year, the preliminary final went down to the wire, with the Sharks accounting for Ajax by just four points.

“It was a scrap towards the end (of the prelim) and we just knew what to do. We had players who owned the moment,” Mifsud said.

While the preliminary final win earnt Beaumaris a re-match with the Fields in the decider and promotion to Premier B, it soon became obvious the fatigue endured against the Jackas carried over into the grand final.

Losing the toss and kicking against the wind at Trevor Barker Oval, the Sharks had no answer to the Fields’ early dominance, giving up 15 scoring shots to nil and trailing by 45 points at quarter time. Caulfield coach, Stephen Lawrence, had his players firing while the Sharks were experiencing a severe case of jetlag following their gruelling prelim one week earlier.

Despite the discrepancy on the scoreboard, Mifsud wasn’t panicked, and he implored his players to remain calm and ‘clear minded’ with three quarters to go.

This time with the wind behind them, Beaumaris hit back quickly with goals from Marcus Lee and Luke McNicholas within the first two minutes. They ate into the lead throughout the second term and trailed by just 19 at the main break after kicking five goals to one.

Maintaining the momentum they’d recovered heading into half time, the Sharks dominated the third term with three unanswered goals against the Sandringham breeze and went into the final quarter just two points behind. This, according to Mifsud, was when the two heavyweights started slugging it out.

Within the opening minute of the fourth term, McNicholas – whose father played in the club’s 1970 premiership – kicked his second goal for the day and put the Sharks in front for the first time.

“We hit the front probably too early in the end because they were defending… and then Caulfield thought geez, we’ve got to start to score,” Mifsud said.

The Fields did exactly that and regained the lead when Hammond and Perkins landed a pair of blows and booted the next two goals. Still trailing by seven points with 10 minutes remaining on the clock, the Sharks squandered two chances in front of goal when Travis Woolnough and Tom Dean misfired.

Less than a minute after Dean’s behind, the Sharks attacked inside 50 once more and it was through a bit of brilliance from eventual Michael Ritterman Medallist, Chris Langdon, who fell to ground, bounced to his feet with ball in hand and check-sided what would be the match-winning goal with just over six minutes remaining.

The Fields would attack feverishly in the final five minutes, but the Sharks knew how to protect a lead, having trained for that exact scenario for two years. The ball was being thrown up at a stoppage in Caulfield’s forward 50 when the final siren sounded, with waves of Sharks supporters flooding Trevor Barker Oval to celebrate one of the greatest grand final comebacks in history.

Listen to the full Beaumaris ‘Clubs in Focus’ Podcast below, including interviews with Jason, Ron Nicholson, Guy McKenna, Andy Sheldrake and Ellen Wood.