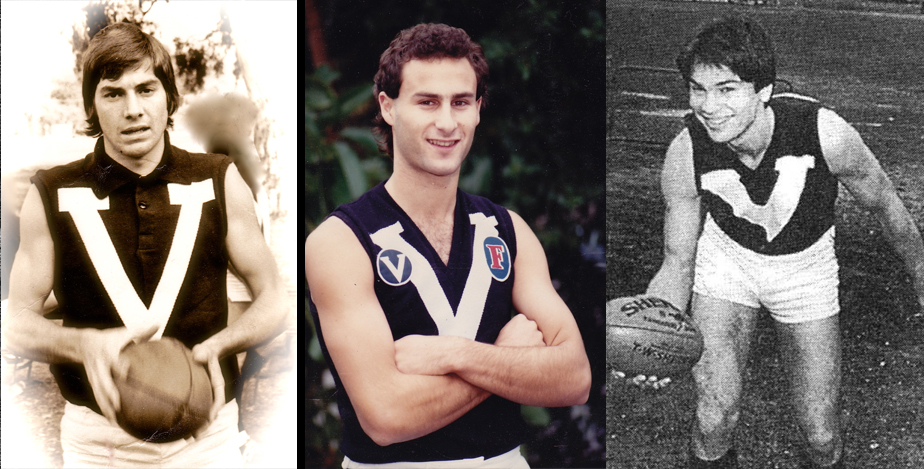 Today the 7th Annual Big V Club Lunch will be held at the RACV Club in Melbourne. Two more names will be immortalised as Big V Champions and one current Champion will be elevated to the status of Legend.
The Big V Club Lunch has grown each year and this year the lunch has already broken records in the numbers that will attend breaking the previous record comfortably.
The Lunch doubles as a means to acknowledge past greats of the Big V and as a reunion of previous Big V teams. The official parts of the day are set aside to honour those that have contributed to the VAFA’s representative program in a way that deems them to be a Champion or Legend of the Big V.
The unofficial part of the day is for old representative teammates to catch up and re-live past glories. This year the Big V Club celebrated the Big V teams of 1963, 1973, 1983, 1993 and 2003.
So who are this year’s inductees? We have profiled each of them below so that you can gain a small understanding of why the Big V Club committee saw reason to bestow the honour of Big V Champion and Big V Legend on these great representative names.
John Anderson (Old Scotch) – Big V Champion
John is a six-time club best and fairest at Old Scotch and captained the side in two stints from1972-73 and 1975-79. John’s leadership was revered and he was instrumental in recruiting gun coach Laurie Aghan to Old Scotch in 1976. John was the back-to-back premiership captain under Aghan of Old Scotch in 1977 (B Grade) and 1978 (A Grade). In fact John is the mot recent Premiership captain of Old Scotch. Club football aside, John first played for the Big V in 1972 and he represented his state on 11 occasions in total. John was named Vice Captain of the Big V in 1974 and again in 1976 for the carnival team. Back to club football, John was named captain of the Old Scotch ‘Team of the Century’ in 2000, a year after John sadly passed away, all too soon whilst overseas in Greece.
Bruno Conti (North Old Boys) – Big V Champion
Bruno played 246 times for North Old Boys claiming to club best and fairests. He captained the club from 1994-1996 and was Vice Captain the four previous seasons to that. For the Big V that Bruno’s record is simply incredible. In summary Bruno played 16 times, was a selector 13 times, and has been involved as a board member for 36 games. These matches combine for Bruno being involved in 65 Big V matches over a 25-year period. Bruno has been involved in games in WA, SA, Tasmania, New Zealand and Ireland and through the AAFC in South Africa. After debuting for the Big V in 1986, Bruno played two years of reserves football at Essendon and Collingwood before returning to the VAFA and winning selection in his second Big V jumper in 1989. Bruno excelled in Big V colours, winning the best Big V player in 1990 versus South Australia, he was named All-Australian in 1989 and 1991. Bruno was Big V Vice Captain on six occasions in 1990, 1993-94.
Ian Cordner (University Blacks and Old Melburnians) – Big V Legend
Ian Corder was made a Big V Champion in 2008 and today he is elevated to the status of Big V Legend. Ian’s club career started at University Blacks where he played 80 games from 1971-74, playing in their A Grade premiership in 1974. After a year travelling overseas, Ian returned to the VAFA to play with Old Melburnians from 1976-82 for 116 games where he won three club best and fairest’s and won three more premierships, 1976 C Grade, 1978 B Grade and another B Grade flag in 1982. In 1978 Ian completed a feat that no other VAFA player has ever managed. The ‘quadrella’ of Premiership Captain, B Section league best and fairest, B Section leading goal kicker and he also won the medal for the best player on the ground in the Grand Final. At State level Ian made his debut in 1973 and represented the Big V on 11 occasions. Ian captained the 1979 Carnival team in Tasmania and again in 1980. Ian was Vice Captain 1978 and again in 1982 when the VAFA defeated the VFA. Ian was made Vice Captain of the Old Melburnians ‘Team of the Century’ and was also a Big V Team Manager in 1985.