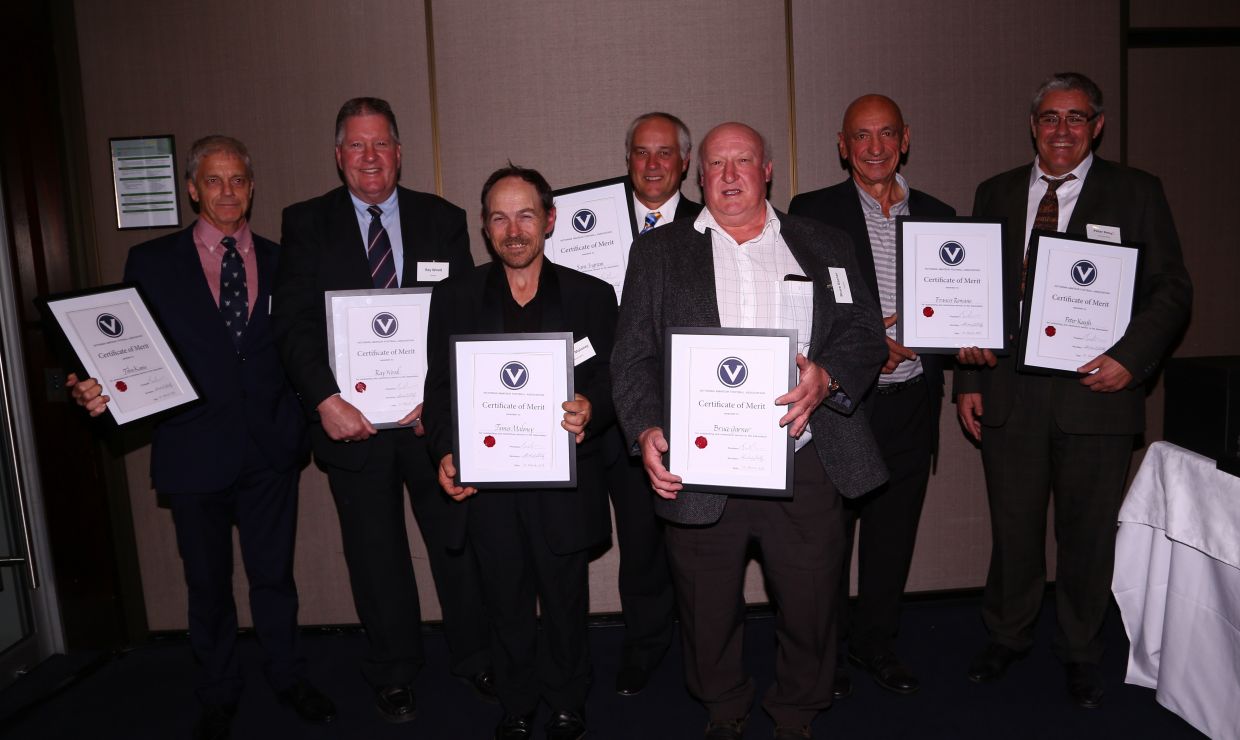 Last night, nine members of the VAFA were presented with a Certificate of Merit for the contribution they have made to their respective Club and/or the VAFA.

In accordance with VAFA policy, eligibility for a Certificate of Merit Award (COM) is open to individuals who have displayed outstanding levels of service and support to either their club or the VAFA, beyond that which is expected of a normal club member and that in the opinion of the VAFA Board has contributed greatly to the betterment of their club and/or Amateur Football in general.

The nine recipients and their vast contributions are listed below.

Bruce Garner has been involved with Oakleigh in a playing, administrative or volunteer capacity for over 38 years.

Between 1977 and 1991, he played 187 games, won three Club best and fairest awards, served as Bar Manager and Treasurer and was made a Life Member of the Club.

Since the formation of Oakleigh Amateurs, Bruce has continued his hard work and dedication to the Club as Player Welfare Officer, Executive Committee Member amongst coaching roles.

In 2012, he was one of 10 people inducted into the Oakleigh Amateurs inaugural Hall of Fame.

As we enter 2016, Bruce will serve his 14th straight year as Grounds Manager for Scammell Reserve, as well as the Oakleigh Junior Football Club.

Since retiring from his 135-game playing career, Sam has served on the general committee for 17 years, holding the positions of President, Vice-President, Social Chairman and General Committee Member.

He was the driving force behind the formation of the Old Mentonians past players’ group, the Past Panthers, and oversaw the reformation of the Club’s U19 team and the institution of a Third XVIII.

Since stepping down as President, Sam continues to organise social functions and coordinate past players. He remains a regular volunteer on match days and has become the Reserve XVIII’s permanent goal umpire.

In a career spanning more than 35 years, John Kanis has represented Caulfield Grammarians, Melbourne University Blues and the VAFA as a player, captain, coach, manager and commentator.

He captained Caulfield in 1982, won their Best and Fairest twice and is a member of the Caulfield Grammarians Team of the Century. He then made the move to University Blues, played 182 games and captained the Club for four years.

After 344 VAFA games, John retired from playing and took up the role of Senior Coach at University Blues in 2004, where he led his chargers to a premiership in his first year at the helm.

John coached the Big V with Quinten Gleeson in Ireland in 2013 and assisted Cam Roberts in 2015 moved on to the Blues committee in 2014 and assumed the Director of Coaching role. He is currently special comments for 96.5 Inner FM matches and works alongside Ken Petruco as co-host of Saturday morning program, Clash Jumpers.

Peter Keogh commenced his career in the VAFA as a player for Melbourne University U19’s in the early 1980’s, before a keen sense of justice and appreciation for the rule of law saw him join the VAFA umpires shortly after.

He was awarded Life Membership of the VAFA Umpires Association and a 10-Year Service Award prior to retirement in the mid-90s.

Peter returned to University Blacks as a Reserves Club Umpire and spent almost 20 years in the role where he was often congratulated on his talent with the whistle and natural ease with the players.

James Maloney is the long-serving timekeeper for the Monash Blues Football Club, having kept time since arriving at the Club in 1985.

In total, James has timed more than 1000 Senior, Reserve, U19 and Thirds games at the Club, and now operates the electronic scoreboard and updates the Live Scores Application along with his time keeping.

A Life Member of the Club and popular figure amongst the Monash Blues community, the VAFA congratulates James Maloney on his Certificate of Merit.

During his first tenure as Club President, Tony implemented the tradition of Thursday evening meals and established both the Uni Blues Ball fundraising event and Uni Blues past players ‘alumni’ network, where past Blues players mentor current players and assist with career advice and guidance.

In 2006 Melbourne University Football Club awarded Tony Life Membership in recognition of his contribution to Uni Blues and tonight the VAFA recognises him with a Certificate of Merit.

Francis Romano commenced his playing career for South Melbourne Districts in 1966, playing more than 300 games and receiving Life Membership in 1981.

He joined the General Committee in the 1980s and served for 10 years, before re-joining in 2002 as Vice-President for three years.

A jack-of-all-trades, Francis used his experience as an electrician to assist with Club renovations, and has served as an Umpire Escort, Time Keeper, Bar Manager and still to this day operates as the Club-appointed goal umpire.

Following a distinguished playing career at Old Paradians, Ian Wheeler has volunteered for St Bernard’s for 20 years, commencing as goal umpire, runner, Team Manager and Coach of the junior Club, before selflessly filling a variety of roles with the seniors.

Ian has gone from game day volunteer to senior club runner, before settling in the role of head trainer for the past 11 years.

He has served as head trainer for VAFA representative matches, including the U18 Big V tour of New Zealand.

Ian has served on the St Bernard’s committee and sponsored the Club via his own company.

During his 40 years at Ormond Amateur Football Club, Ray Wood played more than 200 games and served on the General Committee for 13 years.

During his 13-year tenure, Ray spent three years as President, five as Vice-President and has constantly been an active member of the Social Committee where he assisted with the organisation of home game luncheons.

Ray is a Life Member at Ormond and to this day serves as an important source of information and wisdom for the current committee.