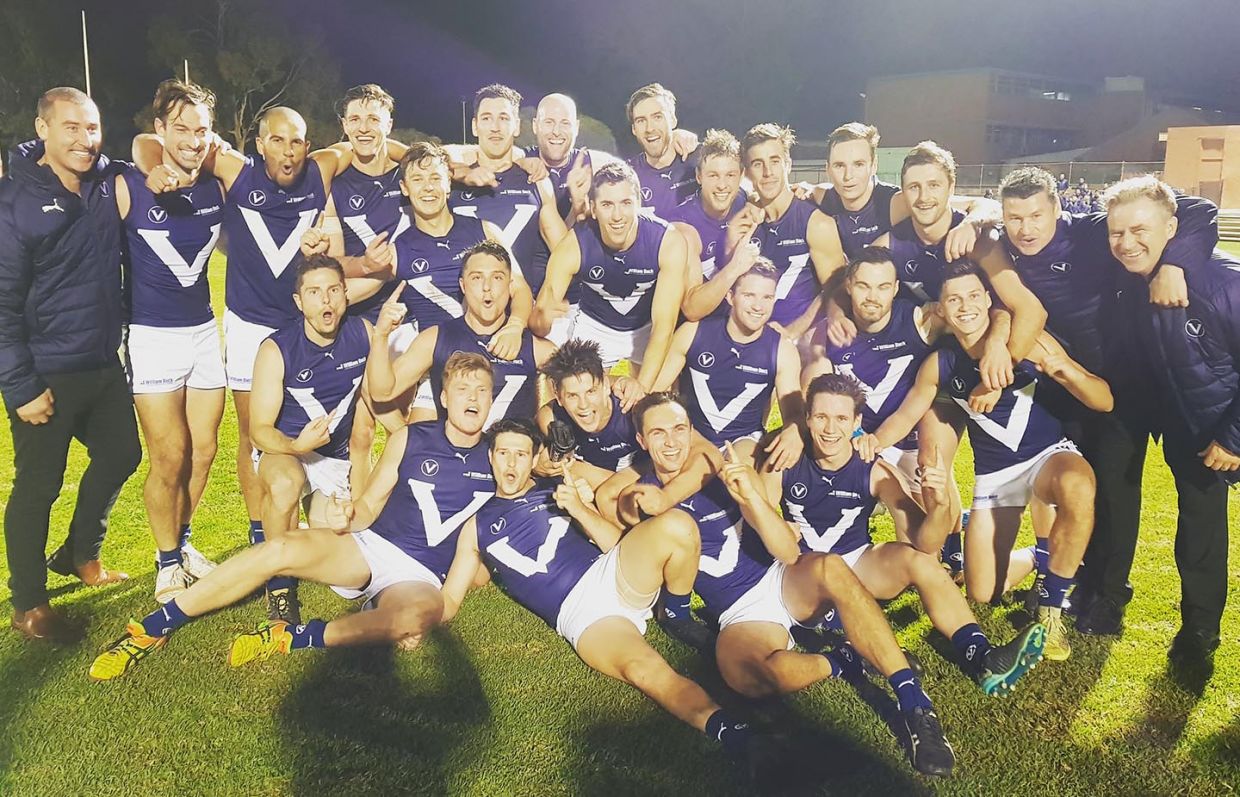 As far as individual highlights are concerned, Eilish Boyd’s grand final goal is as good as it gets. The Friars star kicked four goals in her side’s emphatic Division 2 win over Old Melburnians, but it was when she took possession in the centre of the ground, put her skates on and took four bounces before sending it home that REALLY got the crowd going.

After 69 years without a senior William Buck Premier/A Grade premiership, St Kevin’s OB now have a pair to their name in their 71st season after claiming back-to-back flags following their five-point win over Collegians. The minor premiers took a lengthier route to the grand final this year after losing to the Lions in the second semi, but regained premiership-winning form in their preliminary against Old Trinity. It may have taken 69 years to claim flag #1, but by 71 they are a clear #1.

2018 marked the 13th and final season of VAFA football for Old Trinity and VAFA champion, Brendan Iezzi. Few would argue Iezzi has been the standout player of his era and one of the greatest Amateurs of all time. Two Woodrow medals, two Moore medals and numerous Big V appearances at both B-D4 and senior level, Iezzi’s influence on the Association and his club is immeasurable. Such was the respect for Iezzi, St Kevin’s OB joined the T’s in a touching and emotional guard of honour following his last game in this year’s preliminary final.

UHS-VU lingered in the middle rungs of Division 3 for the best part of 10 years, too good to be relegated yet not quite strong enough to break through for a top two position. That all changed in 2017 when Brendan Payne led the Vultures to their first senior flag since 2007 (Division 4). They went a step further in 2018 by claiming the minor premiership on the back of 17 wins before flying through finals and winning the Division 2 flag for their second on the trot. The premiership was one thing, but the most phenomenal aspect was promotion to Division 1 for the first time in 40 years! Not to mention, a Divisions Coach of the Year gong for Payne and a Fullerton Medal for star forward, Brandon Jackson. Look out Division 1, UHS is one club on the rise.

Very rarely do we see 100 goals kicked at senior level in the VAFA with the last player to do so Dale Collins (Westbourne Grammarians) in 2015. 2018, however, was an absolute treat with TWO star forwards completing the ton in the same season. Oakleigh’s Aaron Cloke (104 in the regular season) and St Bernard’s champion Chad Jones (101) were red-hot in front of the big sticks, with both men leading their respective side’s to finals and the Snow Dogs taking out the Premier B flag. Further to Jones’ effort, he became the first Premier B centurion since Steve Curtain in 1980 and booted his 101 from just 15 games in his first season since retiring in 2015. Yep, let that sink in.

5. OGs return to Premier B after 60 years

It seems like just yesterday Old Geelong were playing off in the 2016 Division 1 Grand Final, coming in as underdogs but edging past Old Mentonians to the tune of eight points. Now, as of 2019 they will be re-entering Premier B for the first time since 1958. While they were unable to claim the Premier C flag, Nick Bourke led the OGs on an incredible campaign whereby they finished third after the home and away fixture but earnt promotion via a thrilling one-point against-the-odds preliminary final win over Williamstown CYMS. They epitomised team football with just Sam Anderson polling more than 10 votes in the Zachariah Medal count and will no doubt compete admirably in Premier B after their reserves also made a grand final appearance. All under the watchful eye of Premier Coach of the Year, Bourke.

Few clubs boast a storied history quite like Fitzroy. Commencing as the University Reds in 1954, Melbourne University’s ‘third’ club alongside Blacks and Blues, the Uni Reds (who later became Fitzroy Reds in 1997) merged with Old Fitzroy in 2008 – officially becoming Fitzroy Football Club. 2018 was another chapter in the club’s incredible history after they won their first senior flag since the merger with a 70-point victory over Old Geelong. In his first year as senior coach, Luke Mahoney guided his chargers to second spot on the ladder before overpowering the CYs en route to the decider. Looking ahead, expect the largest crowd in the history of crowds when the Roys host the Blacks in Round 2 at Brunswick St Oval!

On November 13, the VAFA launched a new logo as we enter the next phase of the Association’s 126-year history. The traditional circled ‘V’ has evolved into an oval-shaped design with modernised text, a set of football goals and the VAFA’s date of origin, 1892. The new logo represents a key milestone in our history, highlighting the competition’s progression whilst paying homage to its rich heritage. And fear not for the traditional white Big V as that will always remain the most recognisable symbol in representative sport and on the guernsey of our Big V players!

2. 37 years in the making for North Brunswick

In terms of feel-good stories, none trump that of North Brunswick in 2018. The Bulls touched every community football fans’ heart after they ended a 37-year senior premiership drought with the Division 4 flag. They were the standout team throughout the home and away season with 16 wins helping them to the minor premiership, before defeating Parkside for the fourth time in the grand finale. Adding to the festivities was the fact their reserve side also drank winners’ water, and they will now move out of Division 4 for the first time in 18 years.

Coming in at number one in the best bits of the 2018 season was the combined efforts of our Big V teams, winning four games from four separate sides for the first time in 93 years of representative football. It all started in Adelaide when our senior men (50 points) and women (37) claimed comfortable victories over the Adelaide Footy League. It was the first time our girls had played the Crow-eaters, while the boys hit back after going down to SA in 2016. The pressure then mounted on Russell Barnes, Dave Kinsella and their squads but they dished out inspired performances with the combined Premier B – Division 4 (16 vs WAAFL) and U19’s (23 vs AFL Vic Country) completing the quadrella. It was a campaign for the ages as our representative program continues to thrive!