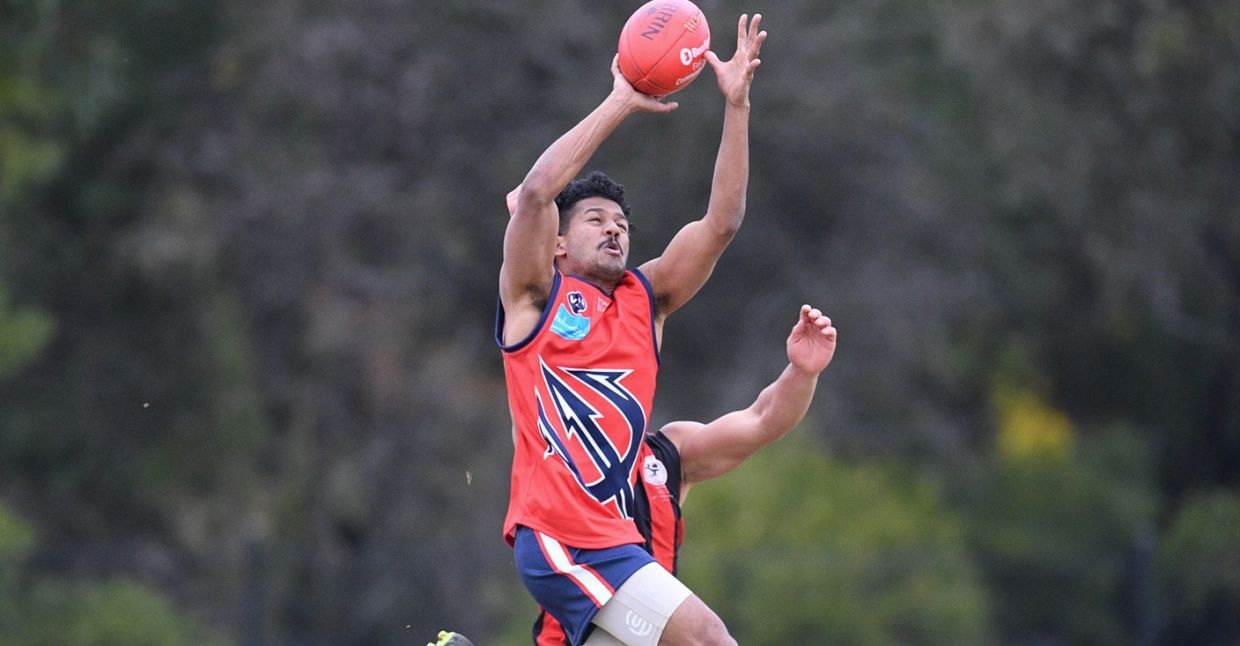 A monster nine-goal third quarter has helped Elsternwick to a narrow 14-point win that all but seals a finals appearance for them, while leaving Eley Park with stiff competition breathing down their neck. After being level at half time, locked away at 51 apiece, the Wicks kicked truly, nine goals and zero behinds, to open out the lead to 33 going into the final change. The Sharks fought back hard but it wasn’t to be, with the victors keeping touch with the top two. Justin Hunter was prolific for the Wickers, booting six goals, while Nicholas Lowrie and Julian Yeatman chimed in with three each of their own. Peter Cassidy was the best on ground for the hosts. Eley Park were led by three goals to William Whyte, and man of the match Josh Beasley. Eley Park take a trip to face off against a South Melbourne side who have been resurgent in the past few weeks, while Elsternwick travel to Box Hill North.

Albert Park remain in second spot, with a handy boost to their percentage, following a 74-point win over Masala Dandenong in Round 14. The Falcons sprinted out early, booting 12 goals to one in the first half, taking a 74-point lead into half time. From that point it was all even, with the Tigers fighting back hard in the second half. Josh Beets kicked six for the Falcons, while Brodie Matheson and Cale Blizzard performed their duties well. No results were entered by Masala. Masala have a bye next up, while the Falcons play in the match of the round against St Francis Xavier.

Ladder-leaders St Francis Xavier were challenged early on by a trying South Mornington outfit, but proved far too strong in the second half to hold the Tigers goalless and run out 103-point winners. South had a slim two-point lead at quarter time, after kicking six goals to the X-Men’s five, before the X-Men muscled into a 15-point half time lead. From that point it was all one way traffic, with St Francis’ Harrison Coe unlucky to miss the bests after kicking nine to lift his season tally to 88 with three games remaining for St Francis Xavier (one bye). All eyes will be on whether or not he can crack the triple figures. Richards-Gill also played sublimely, smashing six of his own to take his season tally to a very handsome 38. Chris Molnar did his best Wolverine impersonation, being the best of the X-Men. Matt Wells kicked three goals for the Tigers, while Jason Bland played hard all day for the visitors. The Tigers will host La Trobe next up, while a tantalising 1st v 2nd matchup awaits as St Francis Xavier take on Albert Park.

Football returned to the Saturday night lights at La Trobe University, as the Trobers took on Box Hill North. For La Trobe, they needed a win to keep finals within reach, and they did just that after taking down the Devils by 22 points. Bailey Zimmerman kicked three for the Trobers, while Andy Castles was the man of the match. Damon Earp kicked two goals, again leading Box Hill North in their goal scorers, while Jake Lacriarde will be one of the favourites to win Box Hill North’s Best & Fairest after another brilliant performance. Next up, Box Hill North hosts Elsternwick, while La Trobe takes a trip down south to visit South Mornington.

La Trobe will face off against South Mornington next week, back into the traditional time-slot. Should the Trobers get up, and other results go their way, they could be sitting pretty in fourth position at the end of the round. For the Tigers, they are playing for pride and wouldn’t mind upsetting a team gearing up for a possible finals campaign.

Box Hill North host Elsternwick. The Wicks have had a great season to date, only missing out on second spot by percentage at the moment. Box Hill North has had a season to forget, winless so far, but a big scalp here would be great for their confidence gong forward.

South Melbourne Districts will host Eley Park. For the Sharks, coming off a disappointing loss, they will look to bounce back against the Swans. The Swans are now just one win shy of the top four, and could storm home into the finals with prolific form and loom as a massive danger team in the division.

Match of the round features Albert Park hosting St Francis Xavier, a top of the table contest that could go down to the wire and be a story for the ages. Harrison Coe, while unlikely to make it this week, is poised for a launch into a triple figure goal tally, and will look to set up for achieving that goal in the coming weeks. Josh Beets has also been awesome in front of goals, kicking 52 to date to give him the second best record for the section. This contest could be a battle between the two full forwards and will be exciting to watch.