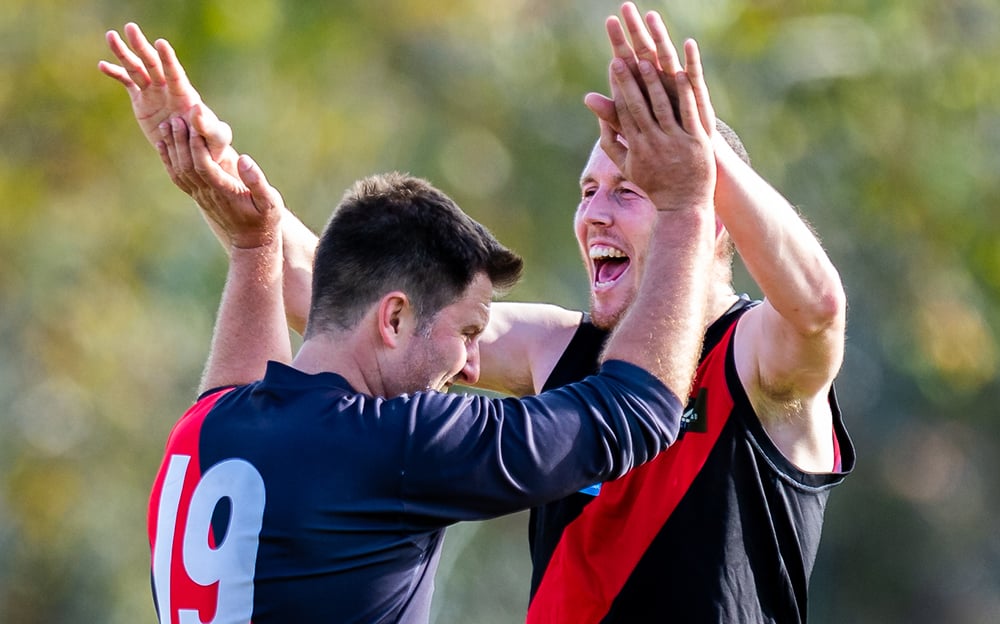 Three teams remain undefeated in Division 4 after round three in what was a wild, wet weather weekend of football across Melbourne.

St. Johns return to divisional football remains unblemished with a 32-point win over Eley Park. The JOC’S provided the bulk of the scoring, however their inaccuracy in front of goal kept the Sharks in the contest throughout the game. Holding a 22-point lead at three quarter time, a four-goal final term was enough to see St. Johns secure win number three of the season. Nathan McConchie led the way for the JOC’s with Aaron Thornton, Rohan Scott and McConchie all booted 2 goals apiece. Jesiah McGarvie kicked two of his for the Sharks, with Chris Brown judged best afield for Eley Park.

St. Johns will once again play the host in the round four as Box Hill North travels to Thomas Carroll Reserve, while Eley Park will again be on the road, this time against La Trobe University in what shapes to be the match of the round.

A 10-goal second term from Elsternwick has kept their unbeaten record intact, as the Wickers cruised to a 121-point win over Swinburne University. Leading at the first break by nine points, the ladder leaders than hammered 18 goals to one for the remainder of the game, with their second quarter effort setting up the victory. Bags of five to Dylan Jones and Matt Ball led the scoring for Elsternwick, with Nick Lowrie adding another 4 goals to his season tally. Tom Tonkin was best afield for the Wickers. Ben Cox backed up last week’s best on ground with another best on performance for Swinburne, while Phil Wild was the only multiple goal scorer on a tough day for the Razorbacks.

Elsternwick travels to Lois Thwaig Reserve for a round four clash with Masala, while Swinburne will return home to St. James Park to host South Melbourne Districts.

Seven goals from Mitch Oliver have ensured La Trobe University also remain undefeated to start the season, defeating Box Hill North 17.22.124 to 5.11.41. After the contest opened with 12 straight behinds, leaving both teams goalless at the first break, La Trobe managed back-to-back six goal quarters to eventually run away 83-point winners. Besides Oliver’s bag, the multiple goalkickers for La Trobe were Riley Alexander with three, while Josh Rogerson and Ryan Wills booted two apiece. Ben Vicary continued his good form with a best on ground performance for La Trobe. Box Hill North were once again led by Peter Cassidy-Marsh, while Ethan King slotted two for the Demons in what was a promising comeback performance after last rounds heavy defeat to Elsternwick.

La Trobe will host Eley Park in round four, while Box Hill North face another tough challenge on the road at St. Johns. South Melbourne Districts were too strong for a plucky Masala outfit to remain the top four at the conclusion of round three. After a close first half were the competitive Masala trailed by only three points at the main break, the Bloods showed their class in attack with 13 scoring shots to five in the second half to claim a 31-point victory. Jamie Brooker’s hot form in front of the big sticks continues, as he kicked another four goals for South Melbourne, with John Eastman leading the way for the Bloods. Brandon Kelly was best afield in what was another spirited effort from the Tigers, with Declan Fowler the only multiple goalkicker for Masala.