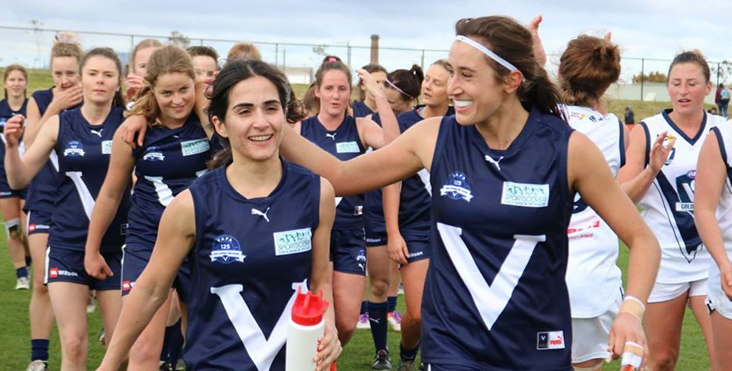 Like any proud parent, the VAFA loves to celebrate memorable moments – just in a slightly different way. We focus more on the whistle blowing at the very first women’s match rather than blowing out candles on a cake; and film the chanting chorus of the Victorian theme song by a victorious Big V squad instead of a flat rendition of ‘happy birthday’. Traditionally, bottles of champagne may be popped at school formals or after finishing exams, but we prefer it on the footy field to commemorate a defining lightning premiership. Forget taking an unnecessary number of pictures to document the first day of school, we have albums filled with photos and videos capturing monumental moments of the VAFA women’s inaugural 2017 season.

When reminiscing on the important milestones in the VAFA women’s competition, a certain Friday in April immediately comes to mind. On a mild autumn evening under the lights of Boss James Reserve, thousands of supporters gathered to be a part of the historical first-ever VAFA Women’s match between Hampton Rovers and Ormond AFC. A buzz of anticipation could be felt at the pre-game function and during a stirring rendition of the national anthem before the first ball up. Both teams put on a show and battled it out before Ormond pulled in front and claimed victory. This team shot is going straight to the pool room!

Kicking off the season with a bang, 24 newly formed teams took to the field on the first weekend of April 2017 to showcase women’s football. The inaugural Lightning Premiership played host to an epic round robin at Elsternwick Park with 12 teams fighting it out before the top two would go head-to-head in the grand final at the conclusion of each day. After three consecutive wins that Saturday afternoon, Old Geelong took out the top spot with a 25-point victory over Oakleigh while Marcellin (our favourite Sheagles) weren’t going to be left out of the history books as they replicated OG’s form and took out the Sunday final against St Mary’s Salesian. To cap it all off, Old Geelong’s Ally Kirkwood and Libby Graham made sure the post-match celebration would be equally iconic, cracking open bottles of Verve Cliquot for a classy commemoration of this unforgettable sporting event. If anyone is looking for a quintessential kodak moment this post-match snap fits the bill.

A Big V in Ballarat

The Big V jumper is synonymous with the VAFA, and the significance of the Victorian symbol was not lost on the 24 women who made up the first female representative side in 2017. Taking on AFL Goldfields in North Ballarat, the Victorian side represented the VAFA with pride and conviction. They hit the ground running with an impressive 49-point victory, led by a best-on-ground performance by Irena Malliaris (Caulfield Grammarians). Riley Christgoergl (Old Xavs) received the Spirit of the Big V but it was clearly evident within the whole team by the delivery of the Victorian theme song!

Mars Stadium in Ballarat was witness to many ground-breaking moments that June afternoon. It was a competitive first quarter with both teams stepping up the defensive pressure and remaining goalless, that is until Sarah Cameron (SKOB Saints) marked inside 50. Lining up after the quarter time siren, Cameron kicked a bomb that sailed through to give the Big V the lead at the first break and simultaneously etch her name in the record books as the first-ever goal kicker. Making history didn’t get in the way of Cameron continuing to dominate the game, she proceeded to be a top-scorer with another three goals under her belt to finish off the match.

Roll out the red carpet

Taking off the muddy footy boots and strapping on the heels, our VAFA women got glammed up for the debut VAFA Wilson Women’s Awards Night on August 20th. It was a night of well-deserved celebration at The Park on Albert Park, with the community coming together to recognise the best of the best from the 2017 season! Speeches were presented, bubbly was poured and stand out performances throughout the season were recognised. Kicking an impressive 29 goals for SKOB Saints, Georgie Lupson was the leading goal kicker for the William Buck Premier section while Laura Jago (West Brunswick), Eloise Defina (Old Camberwell), Belinda Griffiths (Old Mentonians) and Hayley Wurfel (Swinburne University) led the development divisions. It was no surprise when Sarah Cameron was presented with the Anytime Fitness Rising Star Award. Having kicked 27 goals during the season, her enthusiastic goal celebrations received an on-stage mention.

Fitzroy-ACU ruck Tash Ross-Harris was crowned William Buck Premier Women’s Best & Fairest winner for the inaugural season. As well as donning the Big V jumper in July, Ross-Harris polled 27 votes from her 12-game season, including seven best on ground performances in the first 10 rounds. Thanking the Fitzroy family in her acceptance speech, Ross-Harris reminisced on the squad favourite song Torn, the perfect pump-up power ballad which doubled as the song the team could collectively cry to when commiserating their finals loss.

The pinnacle of any footy season is the premiership, with players, coaches and supporters alike vying to take the coveted title. Add the fact that there could only be one first-ever William Buck Premier winner, and you have a grand final for the ages. It came down to underdogs Marcellin up against their more fancied rival SKOB Saints. The Saints, who had lost just one game throughout the season, were forced to play catch up after the Sheagles shot out to a 15-point lead at the first break and couldn’t quite get there as the Sheagles held on by seven in a thrilling finish. The year was capped off perfectly for Marcellin with senior coach Tom Stafford named Women’s Coach of the Year.

PREMIERS | In their first year of Australian rules football, Marcellin Sheagles have taken out the William Buck Premier flag with a sensational seven-point victory over SKOB Saints #VAFAWomens #VAFAFinals #StillLovingTheGame