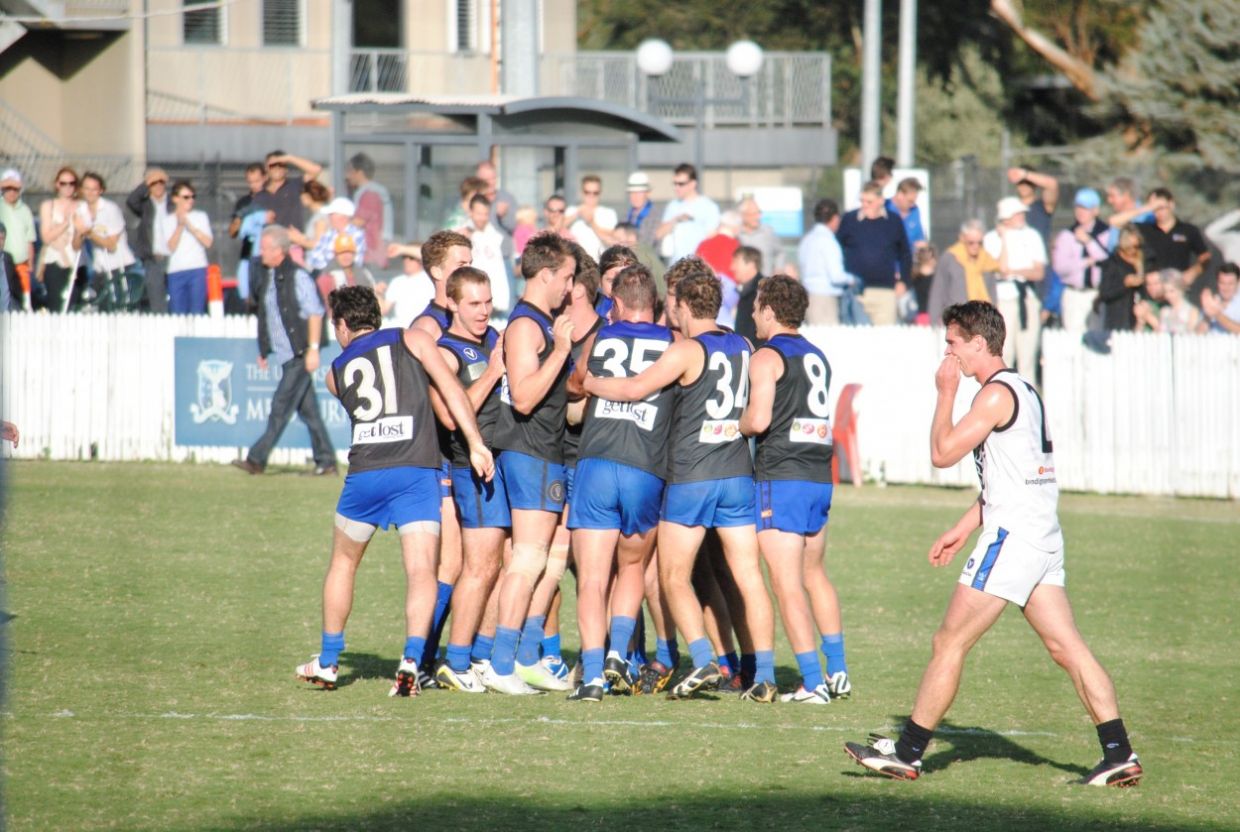 University Blues broke their 2013 duck with a memorable 14 point win against rival University Blacks in front of a huge crowd. The Blues were the better sided for most of the day but the Blacks have become known as the comeback specialists and they didn’t disappoint here. They came from 34 points down at three quarter time to get within two points but that was as close as they got. Nick Smith on debut for Blues kicked five.
In other Premier matches, Old Xaverians also broke their duck in the Grand Final rematch against Collegians, winning by 27 points in a low scoring game. Beaumaris continue their mighty run this time winning by 26 points at St Bernard’s in another tremendous performance from the Sharks. Will Edmonds  kicked five for the winners and Tom Gleeson also five for the vanquished St Bernard’s. De La Salle join the Sharks as the only other undefeated team in Premier, defeating a fighting by 11 points. Old Carey remain the only winless after round 3. Old Scotch beat St Bedes/Mentone Tigers on Thursday.
In Premier B Old Trinity continued their devastating run of form with another huge 111 point win, this time over Werribee. The Tigers are yet to salute in 2013, whilst the OT’s dominance was exemplified by the seven goal performance of Andrew Ramsden. AJAX are also undefeated after they beat Old Melburnians at the Junction Oval by 44 points, David Fayman booting six goals for the Jackas. Parkdale Vultures found their winning form at home against Caulfield Grammarians. The Vultures claiming their first win of the year by 62 points, with Matt Boland back kicking five.  Old Brighton were made to earn their 11 point win over Fitzroy at Brunswick St, both sides were inaccurate in a low scoring affair. St Kevin’s belied Old Haileyburians form of the opening weeks as they ran out convincing winners at Sportscover Arena. SKOBS home by 92 points.
Premier C action saw Mazenod defeat Oakleigh by 59 points leaving the Krushers winless in 2013. Old Ivanhoe won for the first time in a long time, defeating Old Camberwell at home by 53 points. Monash Blues are undefeated in the section after their hard fought 16 point win at Peninsula College. The Pirates dropped their first game of the year and sit 2-1. PEGS are also unbeated after they held off the fancied Marcellin at home by 8 points. Banyule’s Michael Italia helped himself to five goals, and Adam ‘Mr VAFA’ Barclay four as the Bears kept NOBs-St Pat’s winless. The Bears won by 19 points to be 2-1 after three.
In Division 1, MHSOB are on the winners list for the first time this year, defeating Glen Eira by 20 points. A scoreless third term costing the Saints. Old Geelong defeated Whitefriars at Como Park by 6 goals to return the OG’s to the winners circle. Old Mentonians dropped their home encounter with Prahran Assumption, the Panthers going down by 46 points. The evergreen Adam Sleight slotting seven majors for the Two Blues, whilst teammate Pat Harris snagged five. Williamstown CYMS defied a slow start to defeat Ormond at home by 33 points. Hampton Rovers remain the only undefeated side after knocking over the previously unbeaten Bulleen Templestowe by 43 points.  Ed Turner put on a clinic with his six goal performance for the Rovers.
Old Eltham remain undefeated in Division 2 after their 10 goal win over Ivanhoe. Sab Ciavola grabbed another seven goals whilst 2012 centurion Ash Close returned to the ‘Hoes side with four of his own. Therry Penola had a 98 point win over Emmaus St Leo’s with Corey and Jarrod Bannister both kicking a half dozen goals each. (Our thoughts are with Ricky and your family boys). South Melbourne Districts had a great win to open their account against the winless Monash Gryphons. The 26 point margin was established with a five goal to none opening quarter. In a shock result, although not according to Division 2 Scribe Brenton Mann who tipped St John’s the Joc’s rolled Yarra Valley at Domeney Reserve. The 27 point win was setup with a 6 goals to 1 second quarter. For the second week in a row St Mary’s Salesian have won a nail biter! This time defeating Old Paradians at Garvey Oval by 2 points. The Saints are undefeated in the section, Paradians are 1-2.
In Division 3, Aquinas are undefeated after they beat St Francis Xavier 16 points at home. Elsternwick are also undefeated after they thrashed Old Westbourne by 78 points, Justin Hunter bagging six goals for the ‘Wicks. La Trobe Uni joined the winners list for the first time in 2013, defeating South Mornington by 22 points in a low scoring game. Richmond Central accounted for Albert Park at Kevin Bartlett Reserve by 59 points. Swinburne University kept Power House without a win in 2013, going on to claim the four points by 32. Kew consigned UHS-VU to their first loss of the year in the close one of the section. The Bears holding out for a five point win.
In Division 4, Eley Park Sharks enjoyed their week off thanks to they bye and returned without skipping a beat, defeating Chadstone by 98 points. Dragons showed their mettle in this section with a 101 point walloping of Mt Lilydale. Hawthorn also suggested they will be thereabouts defeating Manningham Cobras by 136 points at Rathmines Reserve. Justin Rossoukas (7 goals) and Nick Brown (5 goals) both good in the win but were beaten to best honours by Nathan Raiti. Box Hill North opened their 2013 account with a 54 point win over North Brunswick. Devron Donmez bagged six goals for the Demons. Point Cook continued on their merry way with a 40 point triumph over Northern Blues, the win achieved despite a goalless first term for the Bulldogs.