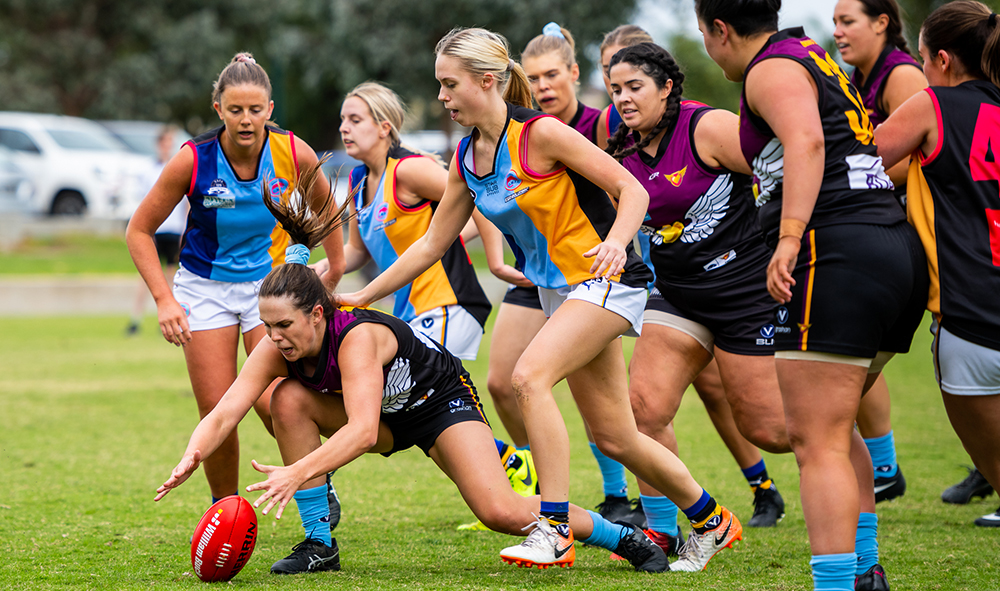 A draw & a tribute in Division 1 Women’s

Division 1 put on an eventful round two which saw a clear ladder leader determined, a draw and superb footballing display to honour the legacy of a club great.

An emotionally charged Old Haileybury have paid tribute in the best possible way to one of their greats with a 56-point win over Old Mentonians. In what will be known as “Spud’s Game” in honour of the late Danny Frawley, who was an integral part of developing women’s football at Old Haileybury, the Hearts stormed home with an 8-goal second half in a performance Spud would be more than proud of. After trailing by 10 points at quarter time, the Hearts flipped the margin by half time taking a 10-point lead into the main break, before putting the foot down to pick up their first win of 2021. Danielle Frawley and Serene Vudiniabola led the way for Old Haileybuy, with Vudiniabola booting four goals, while young gun Lotus Jeffs made her season debut, kicking two goals in a best on ground performance for the Panthers.

In the Division 1 grand final rematch from 2019, history would not repeat for Old Scotch as the Stars played out a draw with old foes Old Brighton. With all the scoring happening at one end, the Tonners early lead had vanished by half time, only to be regained by 4-points leading into the last quarter. But with Old Scotch kicking to the scoring end in the final term, inaccuracy in front of goal meant the Cardinals could only manage a draw in what looked to be a absolute cracker of a contest. Lily Goss starred again for Old Scotch with another three goals in a best on ground performance, while Emma Stafford continued her great start to the season for Old Brighton and Lucy Grant adding another three goals to her tally for 2021.

Old Scotch will travel to Lofts Reserve for a meeting with a ladder leaders Williamstown, while Old Brighton are back on the road in round three against Old Mentonians.

Williamstown CYMS sits alone at the top of table after round two after an impressive 30-point victory of Therry Penola. After a dour first half which saw only one behind kick between both teams, the CY’s surged home in the second half booting five goals to zero to ensure a perfect record to start season 2021. Andrea Cameron earned her second consecutive best on ground for Williamstown, showing her class once again after crossing over from Williamstown VFLW, while Hannah Elliott and Stephanie Basile booted two goals apiece. Eliza German was a standout again for Therry Penola and was well supported by Bridget Le Roy and Ruby O’Halloran.

Williamstown will face Old Scotch in what will be the match of the day for round 3, whilst Therry Penola will face Old Haileybury.