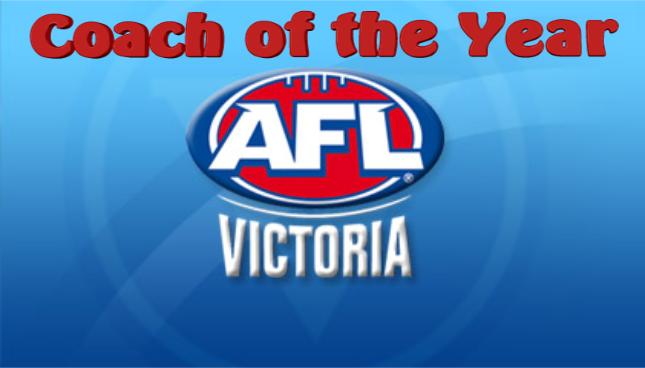 AFL VICTORIA COACH OF THE YEAR

Nominations are once again being taken for the AFL Victoria Central and Inner Southern Region Coach of the Year Award.
This prestigious award recognises the outstanding contributions our coaches make to our great game.
Details are below on the clubs that are eligible in this region and the rules and regulations of the competition and you can also download the nomination form.
BROAD GUIDELINES FOR EACH CATEGORY:
Auskick: Pre-Club, 5-12 years. Introduce beginner footballers to the game, concentrating on skill development and enjoyment to ensure continuing interest and involvement in the game
Junior (U9-U12): Primary School-aged children, 9-12 years. Introduce beginner footballers, develop team concepts, emphasise skill development through training and games.
Youth (U13-U18):Secondary School-aged children, 13-18 years. Develop player potential, enhance team skills and foster competitive spirit and desirable attitudes through training and match play.
U/19-Senior: U/19 & Open age competition. Optimise the available individual and team potential while projecting sound attitudes concerning the welfare of football in general.
PURPOSE OF THE AWARDS:
1.      To recognise the significant contribution of coaches to the conduct and development of Australian Football in Victoria and in particular their region
2.      To recognise the achievements of coaches who give quality service to the game in that they:
2.1 Display strength of character in the role of coaching
2.2 Foster enthusiasm for, interest in, and an excellent attitude to       participation in football
2.3 Give quality value to the goals and purposes of Club and League football.
The following clubs are available in this region (The other regions awards will be opening shortly so keep checking back at vafa.com.au
Central: