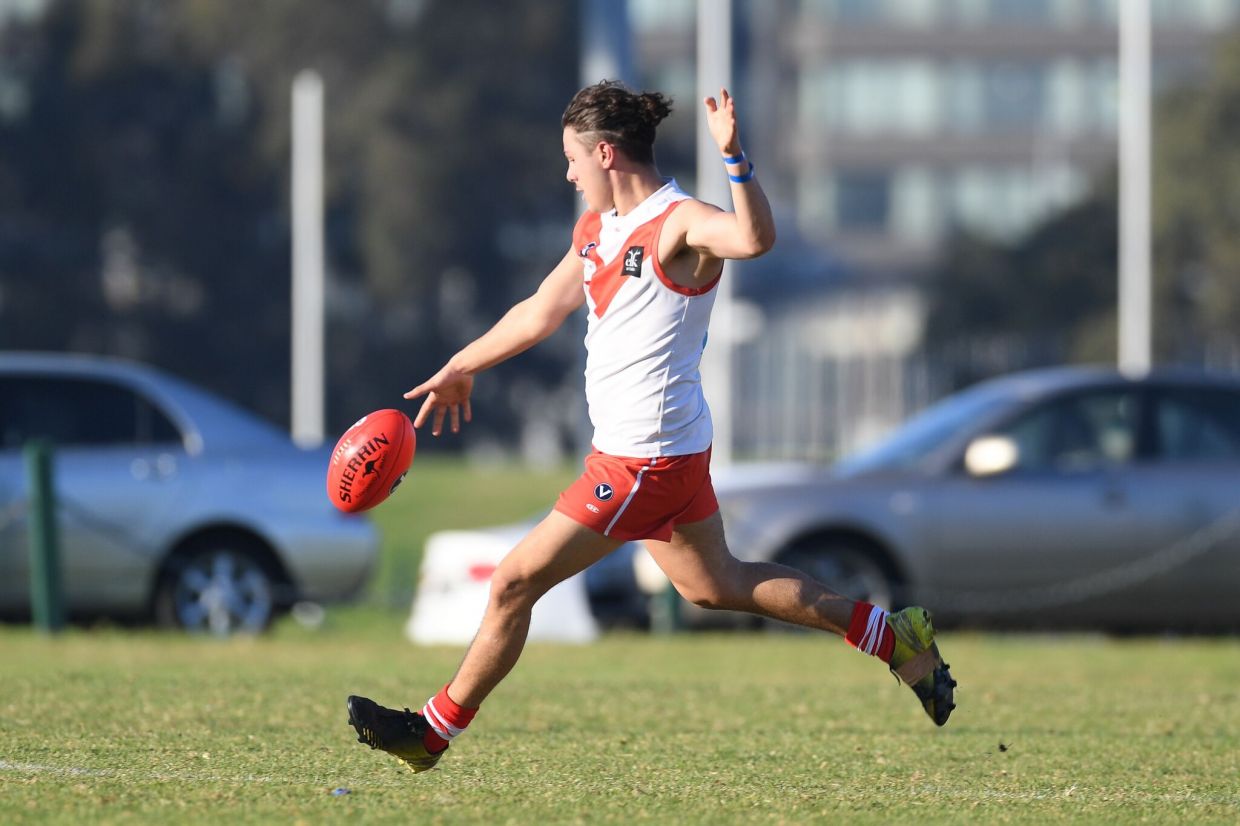 All stops to domination station in Div 4

Division 4’s top 4 all flexed their muscle in a round where convincing victories were in vogue, as three teams remain undefeated in 2021.

La Trobe University remain unblemished to start 2021 with a win over Eley Park. Leading at every break, La Trobe outclassed the Sharks on their way to the 40-point victory. Tyler Costa, Bryce Dowler and Riley Alexander were the standouts for La Trobe, with the latter kicking five goals, while Mitch Oliver kicked three. Ben and Mackenzie Field led the way for Eley Park, with Ben booting three goals. Jarrod Leonard and Jesiah McGarvie kicked two apiece for the Sharks also.

La Trobe will face its toughest test to date as they travel to Elsternwick to face the ladder leaders, while Eley Park will look to get back onto the winners list as they host Swinburne University at Shark Park.

Elsternwick again made claims as the team to beat in Division 4, as they crushed a gutsy Masala outfit to the tune of 141 points. Two 10 goal quarters by the Wickers ensured the huge margin, as they remain on top of the Division 4 ladder with an incredible 512%. Dylan Jones was best afield for Elsternwick, kicking seven goals, while Nick Lowrie booted six, taking his season tally to 23. Matt Harvey was also amongst the Wickers best.

In a battle of two undefeated teams in Division 4, Elsternwick will play host to La Trobe University at Holmes/Todd Reserve, as Masala travel to Elgar Park to take on Box Hill North with a chance to get its first win on the board for 2021.

The big winners of Round 4 were South Melbourne Districts, kicking 23 unanswered goals after quarter time to defeat Swinburne University 26.13.169 – 3.7.25. After an evenly contested first quarter which saw the Razorbacks take a two-point lead into quarter time, the Bloods kicked into gear and showcased their class over all areas of the ground to run away with the four points and a nice boost to its percentage. Jesse Andrew kicked six goals for South Melbourne, with Sam McGinn and Jamie Brooker booting four each while Matt March was named best on ground. Lachlan Randello was best afield for Swinburne.

South Melbourne will travel to Dandenong for a huge clash against the undefeated St. Johns, as will Swinburne who are on the road to face Eley Park at Whitehorse Reserve.

11 goals from league leading goal kicker Aaron Thornton have ensured St. Johns have continued its great start on return to divisional football with another emphatic victory, this time at the expense of Box Hill North.  Leading at the main break by 73 points, it was academic as the JOC’s ran away with their fourth win of the season, 142-29. Thornton’s impressive haul take his season tally to 26, with Corey Ely putting on another strong showing in a best on ground performance. David Edwards and Ritchard Keane led the way for Box Hill North.

St. Johns will face their toughest opponent to date when they host South Melbourne District, while Box Hill North will return home to Elgar Park to take on Masala.