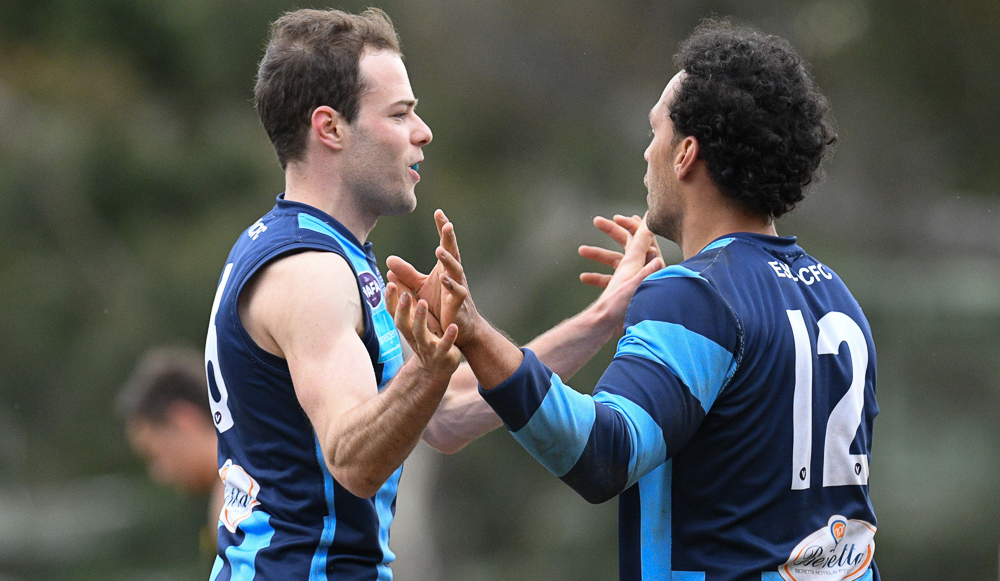 A comprehensive win over the Westbourne Grammarians has seen Emmaus St Leo’s rocket to the top of the Division 3 ladder with a hefty percentage. It was a relatively sluggish start for both teams as they shook off the cobwebs brought on by the year off, but it wasn’t long before the Animals took control at Bennettswood Reserve, going into the main break 40 points up and storming home as 72-point winners. Despite finishing the first quarter with 11 behinds thanks to some blustery weather, Emmaus St Leo’s ended the game with 11 individual goalkickers, and are going to be a tough team to shut down scoring-wise, particularly Jack Hunt (3) and Matt Hill (3). For Westbourne, it wasn’t all bad news, with 5 goalkickers, including Ali Eqbal (2), who once again proved he’s a force down forward.

Richmond Central’s 2021 campaign started off on the right note as they defeated Canterbury by 14 points. It was a mostly even contest for the better part of the day until the last quarter when the Snakes put their foot down with 3.6 to 2.3. Starring for Canterbury was their senior assistant coach Steven Pimm, who kicked six goals despite the loss, while for Richmond Central, it was returning player Jake Munro, and Benson Adams notched up three each of their own. The premiership quarter was Canterbury’s downfall as they failed to score a major and despite some wayward kicking from Richmond Central, who piled on 2.8 to set up their final term.

Parkside recorded their first win of the season against Albert Park at Bill Woodfull Oval. It was an arm wrestle all day until the final quarter when the Red Devils pulled away by piling on four goals to one. In front of goal, it was a battle of the Simons as Simon Mackie, in his first game for Parkside, starred with three goals, as did Simon Andrews, in his first for Albert Park. The Falcons are left to rue the missed opportunity after jumping out of the gates to finish the first quarter 11 points ahead but 3 goals to nil in the second quarter set the tone for the rest of the day. Parkside’s defence was key to their win, after allowing three goals in the first quarter and then only two for the remainder of the match.

Round 1 provided more than something to smile about for North Brunswick, who started their season in style after downing Hawthorn in a one-point thriller at Rathmines Road Reserve. Hawthorn proved that despite their coaching shakeup a week out from the beginning of the season, they are in good hands as playing coach Justin Raiti (1) lead from the front and was named as one of the six best. The Bulls’ Sam Willatt was unsurprisingly named as one of the best on ground with a 4-goal performance in front of the big sticks, with Jareth Ombiga playing a supporting role and ending the game with two to his goalkicking tally.

North Brunswick are hoping to take the momentum they gained in Round 1 into their second game as they welcome Canterbury to their home turf. The adrenaline is likely to still be pumping for the Bulls after coming away one-point winners, and the Cobras will have to combat that as they search for their first win for 2021. This weekend, Westbourne begin Round 2 on the bottom of the ladder as they hunt for their first win and will face worthy competitors Richmond Central at Kevin Bartlett Reserve. The Snakes will be ready to add another four points to the board as they return to play their first game of the season at home.

Emmaus St Leo’s take on Parkside at Pitcher Park for their first away game and will look to extend their lead on the ladder with a big win. 2019 provided some good memories for the Animals when they visited the Red Devils at home, and this early on the battle between first and second on the ladder is likely to be very telling. It’s another home game for Hawthorn as they take on Albert Park, with both teams on the hunt for their first win of the season. The Falcons will look to rebound from last week’s loss and hopefully take full advantage of any early jump they get on the Hawks, who are well and truly ready for redemption after going down by one point in a home ground thriller.