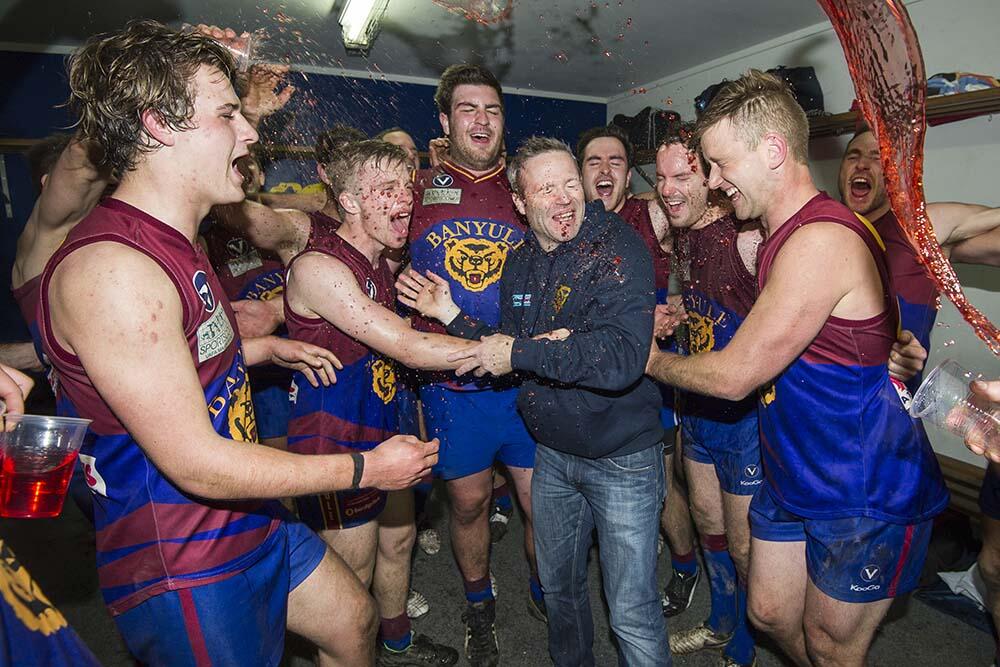 Important wins registered for Banyule, St Bedes/Mentone Tigers and Mazenod highlight the Premier sections.
St Bedes/Mentone Tigers are off the bottom of Premier after their gutsy 14 point win over Old Xaverians at Brindisi St. The Tigers matched Xaverians at the contest all day and Jaryd Robertson was everywhere, hauling in 19 marks in a dominant mobile ruckman display. Handley booted four classy goals for Xavs but it wasn’t enough as they remain on 2-7 with both the Tigers and Old Brighton.
Old Brighton returned to the bottom of the table after they fell well short of University Blacks at Uni Main Oval. Blacks maintained their advantage on top of the table as they ran out 101 point winners.
St Bernard’s stayed hot on the hammer of University Blacks with their 29 point win over Old Scotch at the Snakepit. The Cardinals had Mark Passador as their main source of goals with three, but St Bernard’s had 10 individuals boot majors in the win.
Old Trinity continued their brilliant form as they comfortably handled visitors De La Salle by 85 points. The T’s had an astonishing 14 out of their 22 players kick goals in the win, Osborn and Iezzi both kicking three each.
Collegians jumped Beaumaris at the Aquarium to take a commanding lead at quarter time. For the second straight week, the Sharks were held goalless in the opening quarter and whilst they rallied late Collegians had already established a match winning lead. The Lions triumphant by 18 points with Taft booting five goals.
Old Melburnians spoiled the fun for Old Carey’s Al Stewart-Holmes in his 200th match. It was another Al, Al Armstrong for the home side that booted four goals in OM’s 50 point win over the Panthers. Old Melburnians reminded everyone that they are still very much a force in Premier B as they moved up to six and are just two games outside the four.
University Blues led all day but were challenged early on by Fitzroy, but another powerful nine goal final quarter saw the margin blow out to 95 points at the final siren. James and MacKenzie both booted five goals each in the win that sees Uni Blues go three games clear on top.
AJAX moved back into the four with a big 60 point win at Caulfield Grammarians. Fayman booted six goals whilst Lew booted five as the Jackers moved to third and the Fields dropped to 8th.
St Kevins returned to the winners list after a three week absence with a 71 point win at Old Haileybury. Parkes kicked four goals for SKOBs who move back to second. Meehan was a standout for Old Haileybury with five goals of his own.
The battle between last year’s promoted sides from Premier C was pivotal considering both Mazenod and Old Ivanhoe were occupying 9th and 10th coming into the game. It was the Nodders though that came to play. Mazenod triumphing by 73 points with Dean Kelly starring with 7 goals. The win saw Mazenod bolt up to seventh, whilst Old Ivanhoe remain rooted to the bottom.
The result of the day in Premier C was undoubtedly Banyule’s maiden win of the year, defeating Peninsula at the Bear Cave by three points. Banyule led all day and survived a six goal final quarter charge from Peninsula to record a famous victory. Michael Italia booted five goals in the win for the Bears.
Marcellin returned to the winners list in their 60 point win over Parkdale Vultures. The Eagles stay a game clear on top as Bolger kicked seven goals in the win.
PEGS came crashing back to earth as they suffered a 65 point loss away at Oakleigh. The Krushers drew their season level at 5-5 and are just a game behind PEGS in 5th. Oakleigh lead both Peninsula and Parkdale Vultures who are also both on five wins after ten weeks of the year.
Hampton Rovers continued their hold over rivals Ormond as they defeated the Monders at EE Gunn Reserve by 20 points. McCooke’s four goals for the home side were matched by four from Ed Turner as he helped Rovers to a seventh win of the year to entrench them in the four.
In the final match, Monash Blues were too good for Old Camberwell at Gordon Barnard Reserve, running out winners by 59 points. Blues hold on to second spot from Rovers on percentage. Cosgriff kicked five and McKenzie four in the win.