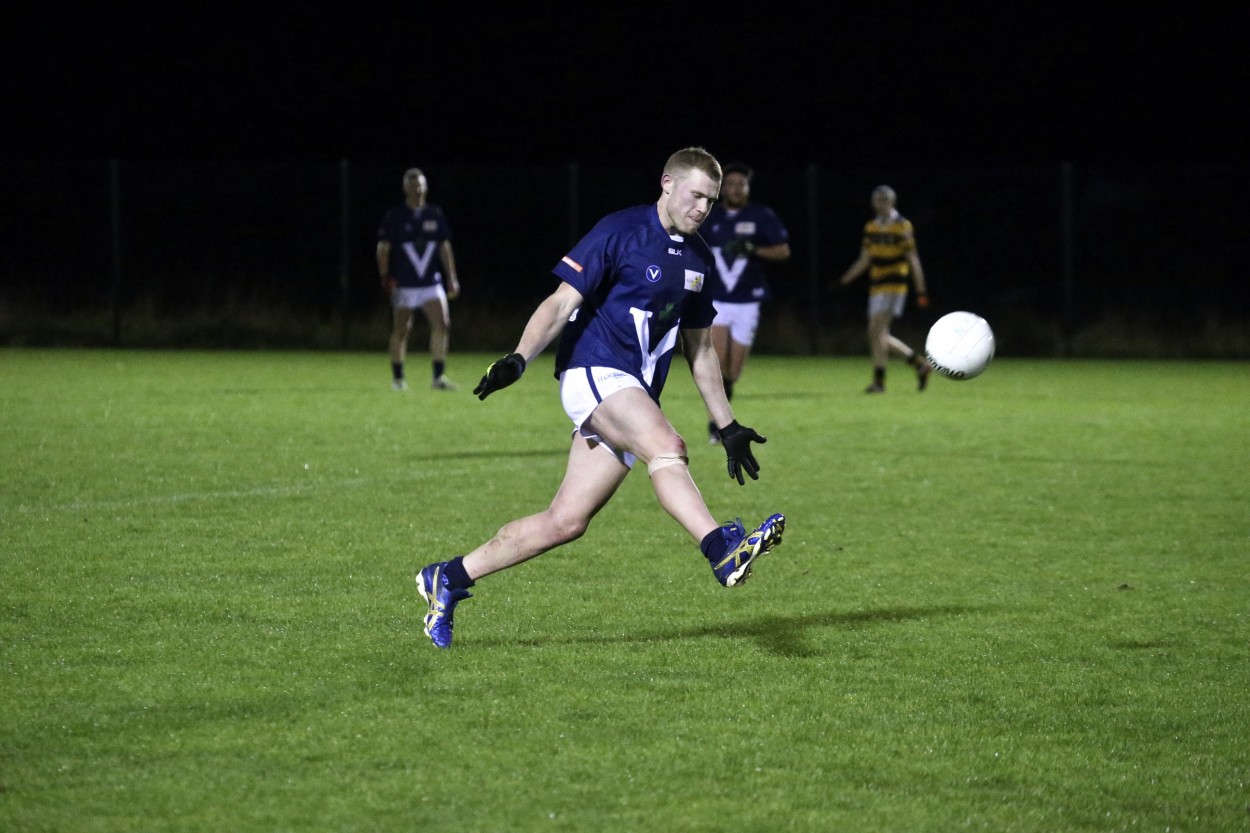 Ash Close and Brendan Goss proved the most successful representative 1-2 forward punch since Gary Ablett and Tony Lockett, as the touring Big V line-up put Cork powerhouse Na Piarsaigh to the sword on Friday night.
From the outset, the visitors won all the contests that mattered and the home team never threatened. The Victorian midfield was supreme with Ross Young, Peter Summers, Bede Mahon, Marcus Allan and Jarrod Carlson providing massive drive.  When the Corkians did venture forward, Bart Walsh and goalkeeper Lachy McQueen-Miscamble among others turned them away.  Aaron “Billy Bob” Thornton, Dimitri “The Gladiator” Dimakopoulos and Adam “Ace” Collett saw plenty of action and displayed deft touch from early doors.
The home team was weakened by the absence of a number of their stars who would be representing their club at hurling in an important playoff on Saturday. The weather in Cork had been woeful since the Big V team arrived on Tuesday, but Friday afternoon saw the clouds clear and the players undergo final preparations in almost balmy conditions. Co-coach Quinton Gleeson’s pre-game address drew on a war story of encouragement and bravery. However, at the going down of the sun, it got very cold on the terraces, especially for the expanding contingent of travelling Big V supporters.
The players lined up for the anthems but the conveyance bearing the Irish’s “A Soldier’s Song” had to be whisked to a car cassette player and played next to a roving microphone. While several patriotic visitors began singing the antipodean anthem when there was no subsequent vocal styling by Julie Anthony, the Big V team was quickly ushered out of line and to its mark for the obligatory team photo.
Umpire Merv Monty whistled both teams to order and the procession began.  The 2011 tourists managed one six-point “under” for the entire tour, but this team put seven in the back of the net on debut.  The Barons of the Big V conferenced informally after the game and while it was agreed that the home team had applied little pressure, they also concurred that the skill levels of this unit appear higher than expected.
Certainly, there was wizardry on occasions from the aforementioned Goss and Close, and some great teamwork too. McQueen-Miscamble pulled off a brilliant save early and having surrendered the goalie’s shirt to go forward, in the dying stages of the game thumped home a six with a pile-driver that threatened for the goal of the day award.
Na Piarsaigh again turned on excellent after-match celebrations, but the minds of the locals had already turned to hurling. The Big V rides again on Wednesday against Combined Universities and then meets the All-Ireland team on Friday night at Cavan before concluding the tour with a hit-out against Donaghmore-Ashbourne on Sunday. For now, the sights of Galway and Dublin are the primary focus away from the training regimen, which continues at full pace.
Final scores:
VAFA 7-18-6 (102) d Na Piarsaigh 0-5-1 (16)
Unders (6 points): Close 2, Goss 1, Summers 1, Allan 1, McQueen-Miscamble 1, Dimakopoulos 1
Overs (3 points): Goss 3, Close 3, Summers 2, Walsh 2, Thornton 2, Smithwick 1, Bentick 1, Paule 1, Mahon 1, McQueen-Miscamble 1, Allan 1