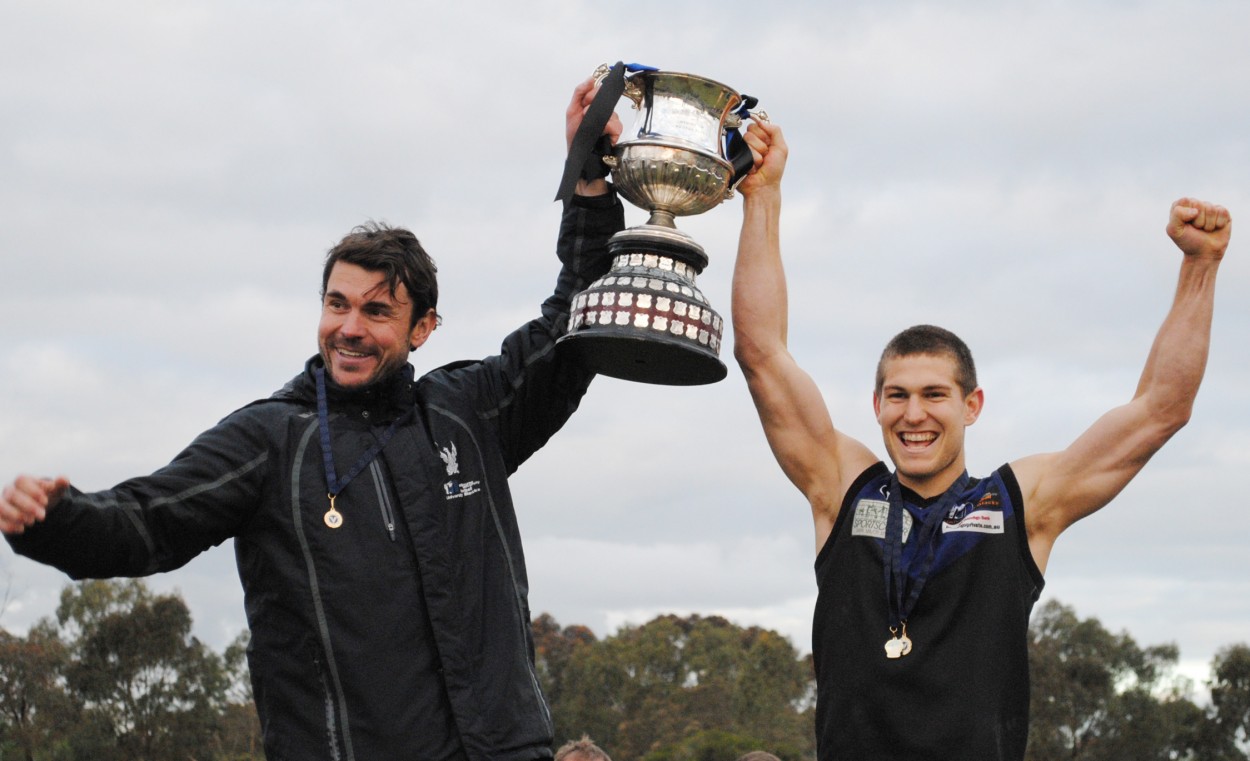 BLACKS RETURN TO TOP AFTER 40 YEARS

University Blacks claimed the Premier Section premiership defeating Collegians by 44 points at Sportscover Arena to win their first Premier (or A Section) premiership in 40 years.
It was a tense first half with only five goals kicked in total, Collegians taking a three point lead into the main break. In the premiership quarter, with Uni Blacks kicking with a favourable breeze to the Northern or Glen Huntly Road end of Elsternwick Park, they piled on ten goals to one to take a game winning 55 point lead into the final term.
Goals came at regular intervals for Blacks but it wasn’t until their tenth goal, off the boot of Alastair Robbins, that Blacks had their first multiple goal kicker, underlying their spread of scoring options.
Shura Taft kicked three goals on the day and kicked the first goal of the match to the Southern end, but aside from he, Collegians looked bereft of scoring options. Nick Corp booted two goals and applied great forward pressure but for large parts of the game, Collegians struggled to get the ball off their half back line.
In the third, Blacks’ skipper, Bede Mahon led the charge from midfield, winning clearance after clearance and delivering a couple of scintillating passes into the Blacks forward line which were converted by first Jason Blake and then by Adam Pattison as Blacks stamped their authority on the contest.
Collegians did respond in the early stages of the final quarter with three goals in the first ten minutes, but realistically, the task was too big for the Lions to overhaul.
Harrie Lahy booted Blacks only goal of the last term, and their only goal to the scoreboard end, but it mattered not. Blacks were home and could celebrate a brilliant ascension to the top of Amateur football.
Bede Mahon was awarded the Jock Nelson Medal adjudged the best on the ground from the judging panel.
Earlier in the day, Old Xaverians defeated University Blacks to win the Premier Thirds Grand Final and University Blacks defeated Old Xaverians by 10 points to win the Premier Reserve Grand Final in extra time. The Reserve Grand Final was a draw at full time before two five minute halves were played allowing Blacks to claim a double of flags on the day.
University Blacks      2.3,  2.4,  12.9,  13.12  (90)
Collegians                0.1,  3.1,  4.2,  7.4  (46)
GOALS, University Blacks : J. Blake 2, H. Lahy 2, A. Robbins 2, A. Pattison 1, T. Kruse 1, J. Laurie 1, H. Lacey 1, T. Napier 1, A. Locke 1, S. Weekley 1
Collegians : S. Taft 3, N. Corp 2, J. Kamener 1, H. Croft 1
BEST, University Blacks : B. Mahon, H. Lahy, A. Pitt, S. Weekley, A. Pattison, S. Thomas
Collegians : C. Hylton, J. Eimutis, S. Hibbins, N. Ries, T. Penberthy, C. Holst