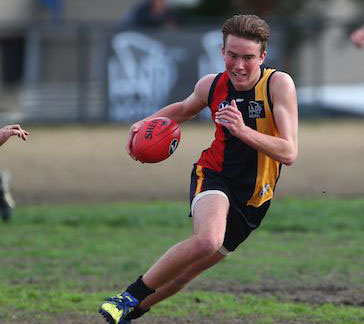 Bloods upset Cobras in Division 3, while Albert Park win battle of the birds against Swans

Aquinas delivered Canterbury’s first loss of the season via a 33-point win at Aquinas College earlier today. Sam Williams and Tim Niezen combined for 10 of the Bloods’ 19 majors and Lachlan Barnes starred in his second consecutive best-on-ground performance. Brett Johnson kicked four for the third-placed Cobras.

UHS-VU made it two wins on the trot as they defeated Parkside by 41 points at Brens Oval. Trailing by 25 points at the first break, the Vultures were relentless from then on as they kicked 16 of the next 21 goals. John Clark and Mitch Sweeney snagged four each, while Justin Ross did the same for the struggling Red Devils.

Nothing can seemingly stop Hawthorn at the moment as they recorded their fifth consecutive win, this week defeating Elsternwick by 82 points at Sportscover Arena. Jason Ince was the star of the show with six goals, while Luke Piccolo and Sam Gold were the other multiple goal scorers for the Hawks. Justin Hunter stood tall for the Wickers with four goals taking his season tally to 20 from five outings.

A five-goal haul from Stuart Maunder in his first game for the year helped Albert Park to a 19-point win against South Melbourne Districts at Lindsay Hassett Oval. Leading by just six points going into the final term, the Falcons kicked two goals to nil in an uneventful final 30 minutes. The win is the Falcon’s second for the year, while the Swans sit fifth with three wins.

Glen Eira continued their sensational start to the season with a 90-point win against Power House at Packer Reserve. Matthew Cassidy was dominant in front of goal with six majors for the Saints, while Julius Waras Carstensen kicked four. Eddie Nyary played a lone hand as the best Power House contributor on the ground.

La Trobe University moved to fourth place on the Division 3 ladder following their 43-point win against Swinburne University at St James Park. Bryce Dowler did the damage on the scoreboard with four for the winning side, while Danny Manning and Richard Lugg recorded three each for the 10th-placed Razorbacks.