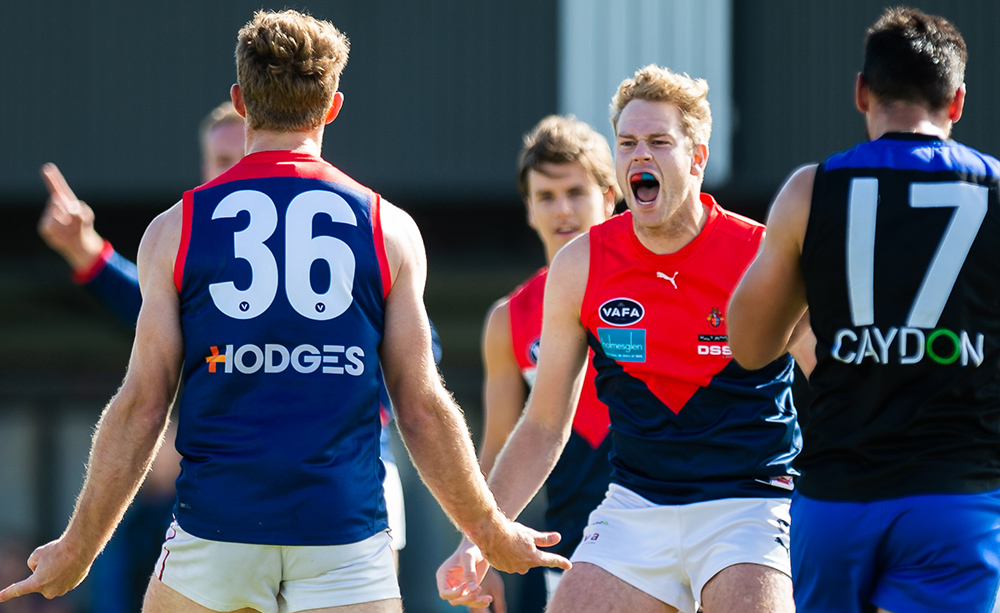 Following the completion of the first four William Buck Premier Men’s matches on Saturday night, not a lot stood out as a real surprise. Sure, Scotch had put on a clinic in their opener, and Rohan Bewick had turned the Snake Pit into his own backyard for the day, but the results were relatively straightforward. Until the following day.

By half-time of the University Blues and Old Brighton clash on Sunday, you would’ve been hard-pressed to find any non-heart-and-soul-Tonner who felt the comeback was on the cards. As one of the biggest Brighton believers of them all, I really lowered my colours when I left Elsternwick Park at the main break with Brighton 26 points down. The reigning premiers were in control, Sam Grimley and Hugh Goddard were too tall, and the Blues midfielders were far too big. Well, so I thought. After failing to capitalise on the cyclonic conditions in the first term, the Tonners turned it around in the third with eight unanswered goals, including four within a seven-minute stretch. Finn Campigli kicked two of his three goals while the other six were shared. Harry Hill and Nick Pavlou picked up where they left off in 2019 and put in dominant displays for the Tonners, while Lachlan Filipovic wrestled back the ruck momentum against Ayce Cordy as the match progressed. Despite the loss, the Blues will be buoyed by Grimley and Goddard. It wasn’t a day for the high-marking forwards, but those two were almost unstoppable in the first half. I’m not sure whether I’m excited or slightly concerned for the opposition when that duo and the two-time Woodrow Medallist are in full flight at the same time.

Taking it back one day and Old Melburnians lived up to the hype surrounding their finals chances in 2021 with a comprehensive 54-point victory over Caulfield Grammarians. With Gus Borthwick, Tom Paule and Andrew Tashevski-Beckwith offering their usual bullish behaviour in the midfield, their off-season acquisitions of the Haysmans (Ben and Lachie) and the Nichols (Ned and Will) allowed for run, dash, and quality ball movement on the outside – something new senior coach Paul Satterley would have loved witnessing in the heat of battle. Sam Dunell was a class above, as was Josh Freezer down back, but it was James Regan – who was playing just his second senior game – who impressed up forward with three goals. Regan kicked 58 goals in Premier Reserve two years ago but has forced his way into the senior side through weight of goal kicking numbers in the practice matches. It was Caulfield’s first shot at William Buck Premier since 2012 and there were myriad positives for Simon Williams and his men to take from the game – namely, the standout performances of Isaac Morrisby and defender Nathan Peterson. Julian Debosz’s 65m set shot goal would have also got the blood pumping – not just in the commentary box.

One man rarely wins a game off his own boot, but in the case of Old Xav’s Rohan Bewick against St Bernard’s on Saturday, we can make an exception. The former Brisbane Lion opened his goal kicking account at the eight-minute mark of the first term and went on to boot another four throughout the quarter before finishing the day with a bag of 10. This allowed Xavs to lead all day, but it was heartening to see the Snow Dogs fight back with 11 goals to nine after quarter time. From their end, Marcus Holland kicked six of their 11 in a one-forward show. Will Hams and Dan Robinson found themselves in the best for Xavs and with Ryan Schoenmakers successfully debuting as a swingman, the ceiling looks as high as it’s been since 2016.

It certainly wasn’t a one-man display like #RoBew, but St Kevin’s OB supporters would be ecstatic with the debut of Tom Boyd in their 30-point win over Collegians at TH King. Boyd kicked four goals throughout the day, with the last of those sealing the victory in the final term. Conor Ross, who has added serious size to his frame, was a standout alongside Josh Wallis, while Nick Wood starred in his role across half forward and slotted two goals. The Lions, who were without their captain Sam Hibbins, continued to apply pressure all day with Viv Michie leading the charge. On debut, Josh Prudden and David Mirra proved they’re going to be a handful for opposition teams.

Old Scotch didn’t look like losing in their return to William Buck Premier as they ran out 66-point winners over Old Trinity to secure top spot after Round 1. Despite missing GT Moore Medallist and ruck star, Tom Downie, the Cardinals kicked away to a 32-point half-time lead and progressively built on it with four goals in each of the final two terms. In just his second senior match since 2018, Sam Dawborn kicked two and was named best afield for Scotch, while former Big V U19’s player Max Martin booted a game-high three goals. After playing just three games in 2019 due to injury, Seb Nicolosi returned for the T’s while former East Brighton FC player Hugo McGlashan made a successful debut as one of the T’s best.

Before I go, it’d be remiss not to mention the VAFA Media bonanza this weekend with the RSN Carnival commentary team calling two games – Friday night footy between Old Trinity and Old Melburnians, and the Saturday afternoon grudge match between Old Xaverians and Old Scotch. Download the RSN App on your smartphone and flick over to Carnival to hear it all live. The William Buck Premier Women’s match between West Brunswick and Old Trinity will be live streamed and called, giving live coverage to three matches over the weekend.