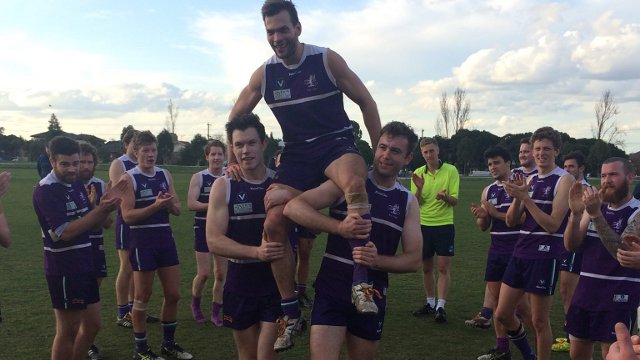 It has been an early off-season of positive developments and fond farewells at Alec Gillon Oval, as NOBs/St Pat’s has officially changed its name and parted ways with its star captain and coach in the few weeks since the end of the home and away fixture.

Due to their tight-knit relationship with the local community around the Brunswick area, the club’s committee made the considered decision to incorporate the suburb it calls home into its title and will henceforth be known as Brunswick NOBSPC.

“You will recall that last year the committee decided we should include “Brunswick” in our name and engaged in a consultation process to assist in determining what the full name should be,” club President Tim Purdey said in the September edition of NOBSPC News.

“That process showed overwhelming support for the inclusion of Brunswick to cement our connection to the local community – in particular the Brunswick Junior Football Club – and also for recognition of the NOBs name and of St Patrick’s College.”

Barring the addition of Brunswick into its logo, the club insists no further alterations will be made to the club colours or jumper.

“We will continue to wear the old NOBs purple and white jumpers for most games and the St Patrick’s jumpers on occasion,” Purdey said.

Under the banner of a new name, Brunswick NOBSPC will also be led by a new captain in the 2016 season, after four-time club champion and skipper, Matt Keown, retired at the conclusion of Round 18.

Keown’s on-field prowess and status as a genuine star of the VAFA was only ever eclipsed by his unrivalled ability to stay fit and healthy throughout his eight-year career at the club.

“After an injury-hit first couple of seasons he didn’t miss a game for six-and-a-half years, finishing with 146 games,” Purdey said.

“We have been extremely lucky to have had the benefit of his tough and spectacular footy, and his leadership, for as long as we have.

“Matt has undoubtedly been one of our club’s greatest players.

“To say he will be badly missed is the understatement of the year!”

While the announcement of a club legend’s retirement is always disappointing, those at Brunswick NOBSPC can find solace in the exciting appointment of new senior coach, Luke Mahoney.

“While Luke has served an ideal apprenticeship for a senior coach, it was his passion for Amateur footy and the depth of thought he has applied to his coaching plans that most impressed the selection panel,” Purdey said.

“Luke has described himself as very excited to be back at the club where he started his footy career in a role he has been looking forward to taking on since his playing days ended.

“We are equally excited to be able to appoint a candidate of such high calibre as our club seeks to rise through the grades.”

Outgoing coach, Ron Rooney, has been lauded by the club for everything he has given in his two years at the helm.

“Ron has only been with the club for two years but has made a big mark,” Purdey said.

“He is a legend of local football in the north-western suburbs and brought enormous passion and commitment to what was his first job in Amateurs after coaching for a quarter of a century.

“We thank him for his efforts and hope to see him involved in our club in the future.”