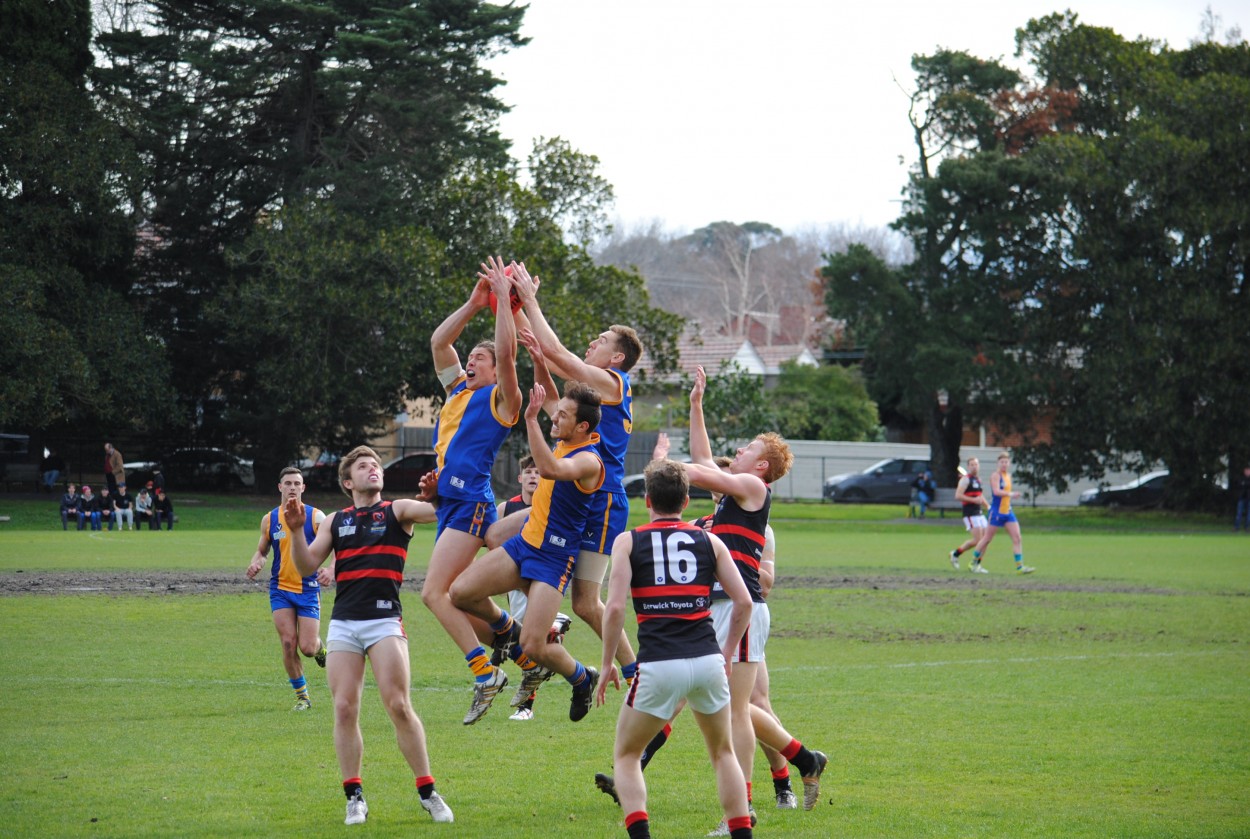 There is no doubt that this time of year is the most intriguing in local football and the VAFA is at the epicentre of that. Relegation is no yet confirmed in both Premier and Premier B, nor –save are all the finals spots. Premier C is a little more cut throat although with four teams chasing one finals spot the day produced it’s fair share of value.

Old Xaverians led 39-0 at quarter time against De La Salle and De La didn’t manage a goal at all until after halftime, going into the main break down 46-7. After halftime was a different story, De La Salle booted nine goals to four to fall an agonizing one straight kick short of Old Xaverians. Three goals each to Goss (OX) and Carney (DLS) in the game that keeps Xavs push to September alive and leaves De La Salle wondering what could have been.
Old Scotch clung on for an important 9 point win over Old Brighton at the Beach Oval. The Cardinals had given themselves a 22 point buffer heading into the last but the Tonners cam home strong to get within three points before Matt Seed kicked the sealer for Old Scotch that sees them assume outright third spot.
Collegians threw everything at St Bernard’s at the Snakepit, but ultimately fell 32 points short. Four goals to Tom Gleeson the highlight in the win that sees the Snowdogs confirm the double chance.
University Blacks were too strong at home for St Bedes/Mentone Tigers, as Blacks ran out 64 point winners. Harrie Lahy and Alastair Roobins both booted a career best of five goals each for Blacks in the win.
Beaumaris a last snapped a seven game losing streak as they kicked eight goals to four against Old Trinity after half time to win by 17 points. It was the T’s inability to kick a goal into the breeze in the third that cost them as Grange booted five goals for the Sharks. The win makes Beaumaris now almost certainly safe for a third season in Premier.

In Premier B, AJAX jumped out to a strong start against Old Carey and the Jackas withstood a final quarter assault by the Panthers to win by 17 points. With a minute to go, Old Carey trailed by only five points, but a late goal to Lew (who finished with 3) snuffed out the prospect of a Carey win. Joel Rice did take this screamer below in the last term but this alone wasn’t enough to get the Panthers home.

University Blues over powered St Kevin’s at TH King by 52 points. MacKenzie booted seven goals in the win for Blues as they continue to handle the teams closest to them on the ladder with aplomb.
Old Haileyburians had a win to savour, getting over Mazenod by 20 points. The win keeps the Bloods alive in their bid to avoid relegation as they closed the gap to Caulfield to six points. The win also ended the Nodders win streak and charge towards finals, with Mazenod now losing control of their destiny, finding themselves a game outside the four with two to play.
Old Ivanhoe made it a win each for the bottom two as they held off a fast finishing Fitzroy at Chelsworth park to win by 4 points. Adrian Delmonte booted four goals in the win that also keeps the Hoes’ faint hopes of avoiding the drop alive.
Old Melburnians made life uncomfortable for Caulfield Grammarians in handing them a 59 point loss. OM’s hold onto fourth spot but AJAX are chasing hard after their win today.

In Premier C, the match of the day was undoubtedly the double chance decider between Monash Blues (2nd) and Hampton Rovers (3rd). You can now reverse those positions as the Rovers ran out 33 point winners at Boss James.
Oakleigh defeated Banyule by 65 points to stay in the race for fourth spot. The Krushers are fifth and have the best percentage the teams vying for fourth but they remain a game behind Parkdale Vultures.
The Vultures officially ended Ormond’s one year stay in Premier C with a comprehensive 103 point win. The Vultures stay fourth and earned some valuable percentage should they drop a game, however they control their own destiny.
Old Camberwell staged a stunning nine goal final quarter to run over the top of Peninsula in Mt Eliza. The Pirates who had themselves kicked seven goals in the third term were held goalless and were powerless to stop the relentless Wellers push. Le Cerf was on the end of five majors for the Wells.
Marcellin held off a fierce challenge from PEGS at Bulleen to win by 10 points and stay a game clear on top. PEGS now a game from fourth and they have the worst percentage of the finals aspirants chasing that one spot.