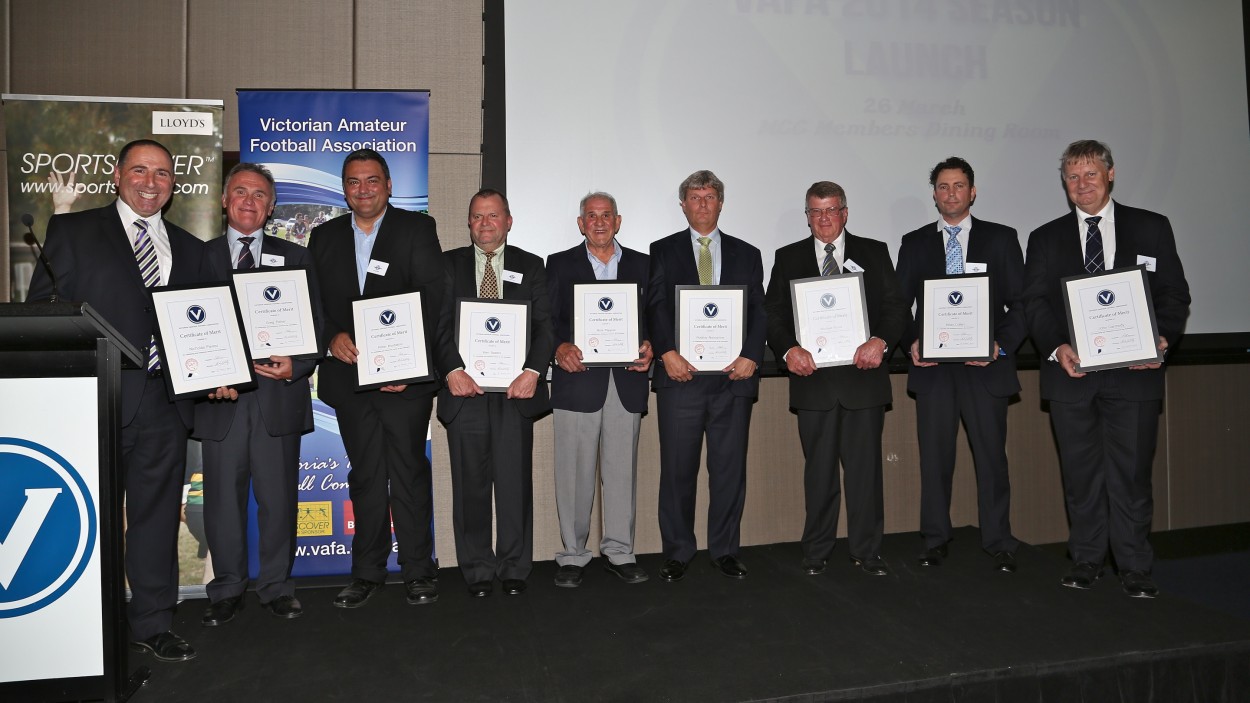 Nick Pavlou spoke magnificently on behalf of this years Certificate of Merit recipients, read his response and watch the tribute to each of the recipients below.
Nine new recipients of the VAFA Certificate of Merit were acknowledged this year’s Season Launch held at the MCC Members Dining Room, they were:
John Carmody (University Blues and Old Xaverians)
Ken Spears (Old Mentonians)
Peter Kostakis (Chadstone)
Rodney Nancarrow (Collegians)
Greg Fisher (Ormond)
Michael Wood (Old Brighton)
Brian Cullen (Kew)
Nick Pappas (Manningham Cobras)
Nick Pavlou (Power House)
Nick Pavlou the current serving President of Power House spoke brilliant about the life commitment you make to a football club without ever really realising it was a commitment for life.
Football clubs are an interesting environment and grassroots football clubs even more so. If you liken it to a 1970’s prison movie, you will see the similarities.
The President is the Warden, he actually thinks he is running the show but he really isn’t. The ‘Screws’ are the coaches. The players split into groups.
The seniors – they own the ‘prison yard’ while the reserves are the ones working the prison laundry. The weekly game is just like a conjugal visit on a Saturday afternoon.
However the people on stage with me tonight are the ‘lifers’ the ones that will never leave, not because can’t, but because they don’t want to.
You don’t walk into a club and decide you are going to spend the next 30+ years of your life at this place. It just creeps up on you.
For some, it’s a place to just come and have a kick with their mates, some see it as their social hub but these people on stage see their club as their home.
People will tell you that loyalty and ‘stickability’ is a diminishing quality in a fast moving, fast changing, fast food society. In a world where people’s patiences get thinner, these men and women of our clubs continue to step up to the plate for their club, no questions asked…  and just get things done.
The terms ‘loyalty’ and ‘for the love of the game’ are embedded into the very fibre of every one of the people on stage tonight.
The Power House motto which links back to Lord Somers Camp is ‘Service without Recognition’. Tonight however, we need to take the opportunity to recognise the contribution of this group of outstanding individuals.
We are all custodians of our clubs. We are charged with leaving the club and the game better off than when we took up our positions. We need to have resect for the past, respect the game, respect the people and respect the club and everything it represents.
We thank you and accept these awards as representatives of everyone who makes a club survive.