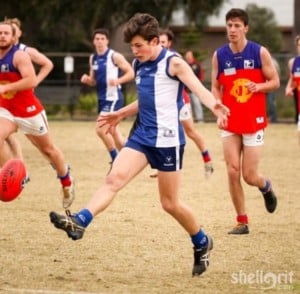 Damian played the last four games for Mazenod’s Premier B side and has found himself in the club’s best players in each of the four games.

Utilising an explosive turn of pace, Damian has secured a spot in the senior midfield as an attacking and highly damaging on-baller.

The only thing more exciting than the dominant role he has played in the above-mentioned grades all season, is that he has done so as a 17-year-old.

Playing a similar role to Adelaide Crows star Patrick Dangerfield, Damian has no issue with taking the game on and subsequently causing nightmares for opposition teams.

A natural leader both on and off the field, Damian looks set to undertake leadership roles within the club into the future.