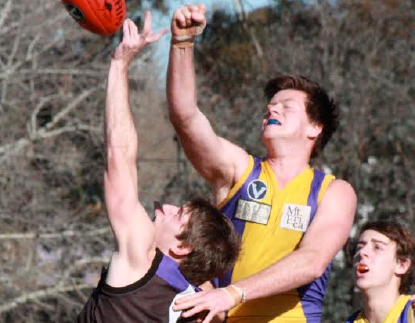 Rising Star week 8 – Oscar Persson – De La Salle
Oscar Persson joined De La Salle in 2011 from St Kilda City juniors, and it was the following year that Oscar began to make his mark. He became a key member of the U19 Premiership side in 2012 for De La Salle, playing predominantly in the ruck.
In 2013, Oscar moved to Sandringham VFL, breaking into the senior team late in the season and being named amongst the best players in his debut game.
Somewhat surprising, and to the great benefit of De La Salle, Oscar has been required for only 1 VFL Development League game this season, spending the remaining 6 rounds with De La Salle. Based on recent form at De La Salle, a recall back into the VFL shouldn’t be too far away.
Oscar is hard working, mobile ruckman with excellent skills, great stamina and footy ‘smarts’. Just 19 years old, Oscar is sure to have a big future in football, either in the VAFA or at a higher level.