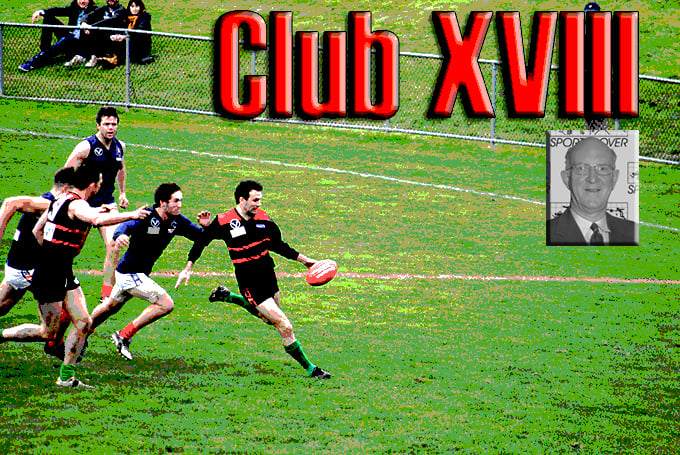 LAST CHANCE
-Norm Nugent
Round 12 produced huge scores and virtually all ten matches were decided by bigmargins. It wasn’t the case in last weekend as prevailing winds and pouring rain kept scores to a minimum. Despite the conditions there were still big victories recorded across the three Sections.
Review of Round 12.
Section 1.
Undefeated leaders Old Xaverians continued on their winning way by inflicting a 64 win over Fitzroy. Virtually all remaining Finals aspirations held by Old Geelong disappeared when St Bernards beat them by 51 points on Como Park. Chris Mitchell with seven goals outscored Old Geelong off his own boot. De La Salle’s players and supporters enjoyed a pleasant Sunday afternoon at the expense of Monash Blues, who lost at Dairy Bell by 77 points. Prahran/ Assumption had the bye.

Section 2.
Whitefriars started competitively against Therry Penola but could not match them in the second half and lost by 31 points after trailing by three points at half time. Ormond led throughout their match against Hampton Rovers and won by 69 points. Former umpire Josh Cukierman was named as Ormond’s best player. Emmaus/ St Leo’s led Williamstown CYMS throughout their low scoring affair, which Emmaus/ St Leo’s won by 18 points. Oliver Hill kicked four of the five goals winning goals in a valuable display. Bulleen Templestowe forfeited to Hawthorn.
Section 3.
Dragons and Eley Park contested a low scoring match, which was won by the Sharks by six points (2.4 to 1.4). Obviously the Sharks were more at home in water than were Dragons. Richmond Central took Kew into enemy territory when they met on the hallowed turf of Victoria Park, Abbotsford. The match provided a close contest throughout and the undefeated Cardinals held on to win by 11 points despite Kew peppering the railway end goals without any success in the last quarter. Before the rains came, University High School/ V.U.T. were able to defeat Masala by 48 points. This victory lifted the Combine into third place.
Preview of Round 13.
Section 1.
Traditional rivals, De La Salle and Old Xaverians meet this afternoon at Darling Park. De La Salle has shown improvement as the season has progressed whilst the Crocodiles have never been threatened in the prospect of losing.  I select the Xaverians although I expect a closer result than those from Rounds 1 (102 points) and 8 (26 points). Monash Blues should defeat Fitzroy especially at the farm. St Bernard’s hold on second position will be loosened if they fail against Prahran/ Assumption. St Bernard’s won their Round 8 game by 21 points and won by forfeit in Round 2. I am confident St Bernard’s will prove to big and fast for their southern based visitors. Old Geelong has the bye.
Section 2.
Based on what I witnessed two weeks ago, I select Bulleen Templestowe to take the points against Whitefriars.  Second placed, Emmaus/ St Leo’s should comfortably defeat Hampton Rovers, who don’t play well away and early. In a battle for third place Williamstown visit Ormond. The sides have already met twice in 2013 for on win apiece. Williamstown C.Y.M.S. won the Round 1 match by 44 points and in round 9, Ormond won by just four points. Ormond is my selection. Leaders, Hawthorn face a tough test at Therry Penola, however I doubt that Therry Penola’s current form will enable them to become the first team in 2013 to defeat Hawthorn.
Section 3.
Kew played well last week but just could not match it with the Richmond Central defence. Today at home, I am confident Kew will defeat Masala. I am just as confident that Richmond Central will defeat the Dragons. The match of the round is between University High School/ V.U.T. and second placed Eley Park. Eley Park has won the two previous games this season by five points (Round 1) and by 21 points (Round 10)  I saw half of the Round 10 game where University High School/ V.U.T. drew equal early in the last quarter before faltering following strong play by Joshua Brown. I expect a torrid struggle from which I tip a narrow Eley Park victory.
TIPS
Section 1
De La Salle v Old Xaverians
Monash Blues v Fitzroy
St Bernards v Prahran Assumption
Section 2
Bulleen Templestowe v Whitefriars
Emmaus St Leos v Hampton Rovers
Ormond v Williamstown CYMS
Therry Penola v Hawthorn
Section 3
Kew v Masala
Richmond Central v Dragons
UHS VU v Eley Park