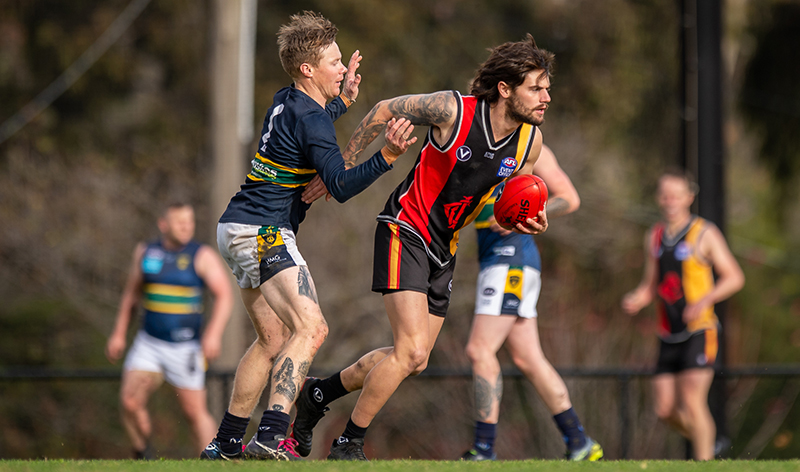 Parkside strengthened their stranglehold on top spot of the ladder with a 43-point win over North Brunswick at Allard Park. The Red Devils kicked off their win with a six goal to zip first quarter before three consecutive three-goal terms kept chipping away at the Bulls, who never regained their footing. Simon Mackie kicked eight goals to earn top honours for the away side – continuing the form that has seen him top the division’s goalkicking leader board. Matthew Holden (3) and Jackson Hubbard (2) added their own majors. For the Bulls, Andrew Ramzy (3), Peter Butler (2) and Rhys Mehlstaubler (2) were all named in their best players, while Matthew Dal Santo was their best player.

Hawthorn AFC boasted seven individual goalkickers as they took down Richmond Central in a tight contest at Rathmines Road Reserve on Saturday. The Hawks were up at every break despite kicking seven behinds in the first term. The Snakes had more opportunities in the final quarter, with five scoring shots to one but could not rein the Hawks in. Darcy Johnston, Harry Rand, and Henry Kain all kicked two for the home side as Hugh Clancey was best afield. For the Snakes, Jake Munro slotted four while Dane Roy (3) rode shotgun. Sam Brown was a standout for his side.

Two seven-goal quarters has seen Emmaus St Leo’s into third spot on the ladder as they comprehensively defeated Albert Park at Bennettswood Reserve. Unfortunately, there was nowhere to hide for the Falcons all day as the Animals piled on goals consistently each quarter, ending the game with 10 individual goalkickers combining for 23 majors. Dan Hill once again starred for the Animals, kicking six majors while seasoned fullback Sam Argus (2) was sent forward in the final term. Jesse Collins starred in a BOG performance. Sam Doolan (1) was the only goalkicker for the Falcons as Joshua Rennie took top honours again for the losing side.

A five-goal final term for Canterbury helped them into fifth position on the ladder, beating Westbourne Grammarians by 44 points at Canterbury Sportsground. Both teams had a very lopsided scoreline which saw the Warriors down by 25 points at the main break despite the Cobras kicking eight behinds in the second term, but they finished 14.20 (104) with eight individual goalkickers. Thomas Lowden (5) starred for the home side, while Steven Pimm and Nick Szabo both added two majors each with the latter topping the list of best players. It wasn’t all bad news for the Warriors as Shaun Hughes found plenty of it and Justin Porter kicked three, with Lachlan Hind (2) and Chris Hudson (2) playing a guest starring role for the away side.

Emmaus St Leo’s will travel to Canterbury Sportsground to face Canterbury in their second home game in a row. The Animals will take some relatively good form into the game, as will the Cobras who sit just outside the top 4 by percentage only, which only signifies just how close the middle of the ladder is and how important even just percentage is. Both Richmond Central and North Brunswick will be hoping to get back on the winner’s list in round seven as former welcomes the latter to Kevin Bartlett Reserve. The Snakes are will be looking to avoid their fourth loss in a row while the Bulls are keen to get their season back on track to contest the top 4.

Hawthorn will be riding on the coattails of the adrenaline high they received in a round five thriller when they visit the unbeaten Parkside at Pitcher Park on the weekend. The Red Devils are going to be hoping to make it seven wins from seven games while the Hawks will have their sights firmly set on challenging for the top-of-the-ladder position. It’s a battle of seventh and eighth when the Westbourne Grammarians face Albert Park at Westbourne Grammar on the weekend. The Falcons are still looking for their first four points on the board and won’t find a better opportunity against a Warriors team on the rebound after an unfortunate loss in round 6.