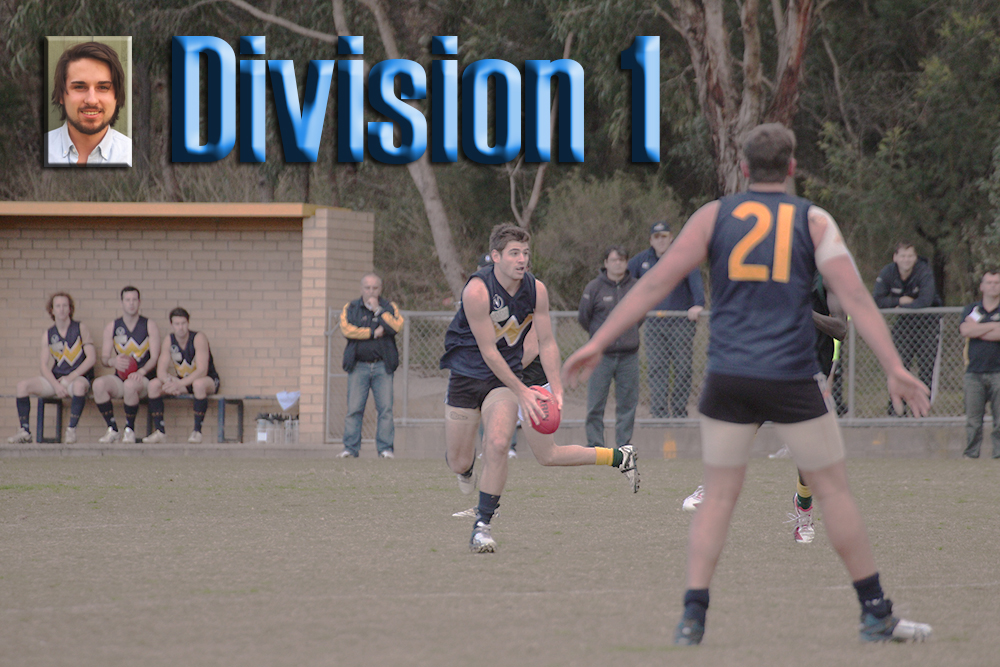 Round 5 – Percentage proving paramount
Only four rounds into the season and Division 1 is already promising a down to the wire finish with six teams currently separated by percentage alone.  All sides from 3rd to 8th teams sit at two wins and two losses. It is a precarious position as the split of the contenders from the journeymen looms. This weekend’s win becomes vital to contender aspirations with big victories to provide dividends in the long run, never before have there been so many ‘8-point’ games in a weekend.
This year has so far proved to be the year of the Rovers as Hampton continued their stellar start to the campaign, steamrolling Williamstown CYMS. The game was well and truly over early as Hampton put the CY’s to the sword taking a 49 point lead going into halftime. No mercy was shown as the Rovers only extended the margin, running away to a 110 point win. Goals came in bags out at Boss James Reserve with Stuart Burggraaff and Samuel Clements leading the way with 5 each. Leigh Fletcher provided first use of the ball out of the centre all day and was deemed best afield as Hampton maintain their undefeated streak moving to 5-0.
Ormond redeemed themselves after a disappointing performance in round 4, announcing themselves as possible finals contenders after defeating Old Geelong. The first half was an arm-wrestle as the two went goal for goal throughout, ending all square at 9.5.59 apiece at the main break. To start the third Old Geelong looked to up the tempo as they kicked away to a four goal lead. Ormond fought back against the wind midway through the term, kicking five straight to go to the final change of ends six points up. Ormond took full advantage of the breeze in the fourth, in an eight goals to one quarter, producing a 52 point victory. A special mention goes to Robert Chisholm, who slammed home a match winning 10 goals, moving his season goal kicking tally to 24.
Bulleen Templestowe travelled to Melbourne High School. The Bullants were coming off their first loss to league leaders Hampton Rovers, and were seeking to regain momentum against MHSOB. This would be no easy feat however as the Unicorns hit their stride after a big victory the week before. The first three quarters produced tough contested footy as goals were hard to come by. A total of only 9 goals were kicked to this point and it was just a solitary one point margin going into the final change. The game opened up in the fourth quarter as MHSOB pilled on the pressure, kicking 9 goals for the term. Inaccuracy cost Bulleen Templestowe dearly  as they had two more scoring shots to their opponents. Dylan Hamilton-Ho snagged a game-high 4 goals for the Unicorns in the 13 point win.
Glen Eira’s troubles in Division 1 were not over just yet as they faced Prahran Assumption away. The Two Blues put yet another ugly defeat onto the Saints’ record as they booted away to a 15 goal victory. Prahran Assumption ran circles around their opponents as they provided excellent delivery up forward with multiple 3 and 4 goal hauls. Peter Cristoforo and John Robbins being the most potent with 5 goals each. One positive in yet another bad loss for Glen Eira was Kivanc Cevik kicking 8 of their 10 goals showing they have a viable option up forward.
Home ground advantage proved to be a deciding factor this weekend as all home sides walked away victorious, Whitefriars were no exception. The Friars hosted Old Mentonians in a competitive tug of war in the first half. The Panthers inaccuracy at goal came back to haunt them as an accurate Whitefriars side entered half time with a 5 point lead with 5 less scoring shots. The third would be the deciding term with Whitefriars doubling their first half score, continuing that dominance in the fourth boosting the margin at the final siren to 62 points. Jean Daou earned best on ground honours with 5 goals in the 99-37 win.
This week, Hampton Rovers will be seeking to keep the good times rolling and improving on on last week’s winning margin as they play Glen Eira. Old Geelong make the trip up to Fearon Reserve to play Williamstown CYMS, I predict Old Geelong to get back to winning ways. Bulleen Templestowe takes on an up-and-coming Ormond side, with Ormond to continue this vain of form away from home. The Two Blues host the Friars in a the match of the round, Prahran Assumption will no longer run under the radar after another win this weekend. Lastly, Old Mentonians host MHSOB at Turner Road Reserve, the Panthers to christen the newly dubbed home ground with a win.