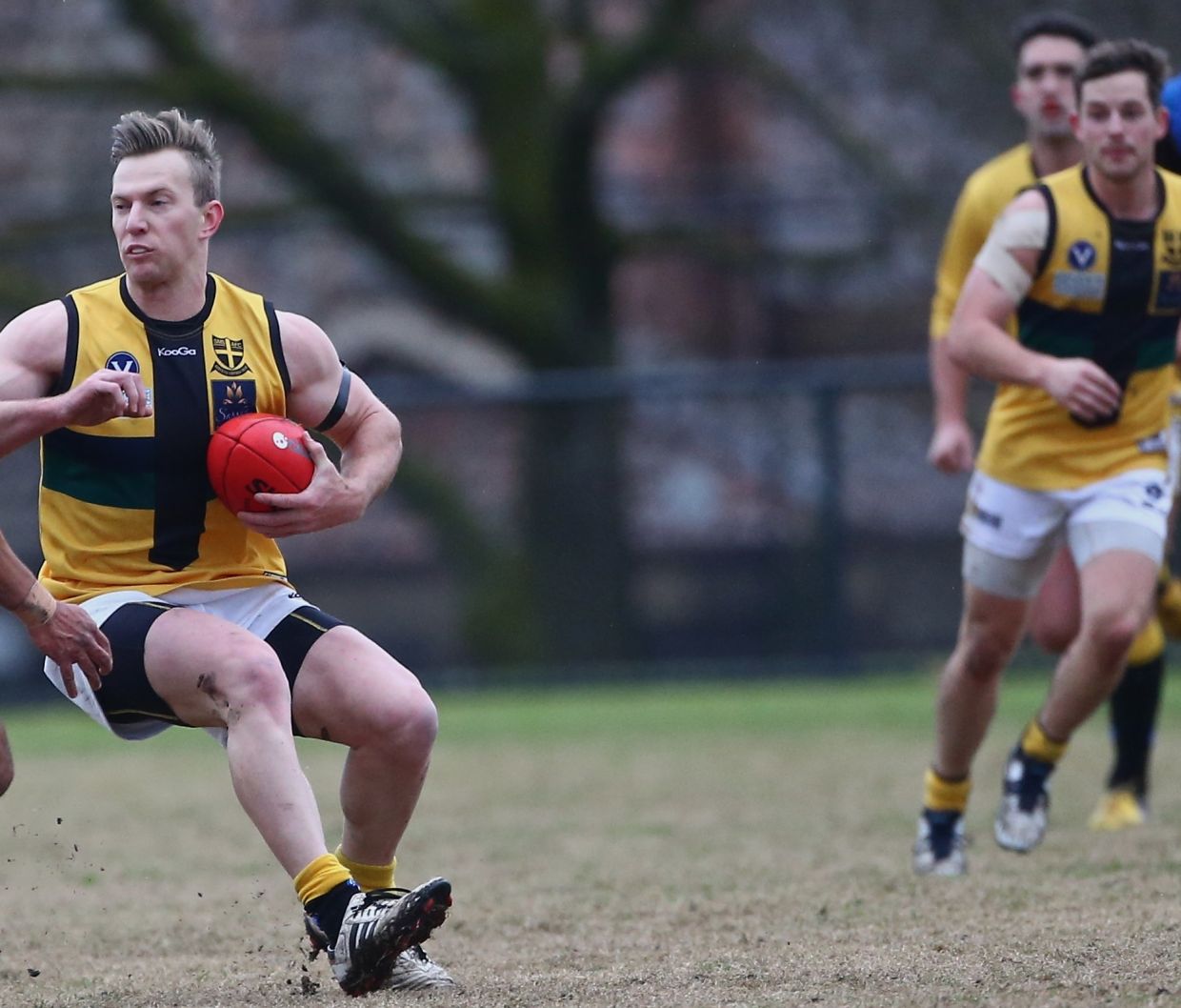 I’ve saved some wonderful clichés for this week. The most overused, emotionally overwrought and inspiring clichés in order to amplify the grandeur of finals footy. This is it. This is what we all play for. The long preseasons, the cold winter months, the social events, the personal triumphs and tragedies. Footy can be as poetic as it is emotionally exhausting. Six teams head off for a few beers to mark a season that was, or for a couple of teams, the season that might have been. The other four gear up for a crack at the ultimate, and for St Mary’s Salesian, it could potentially be a shot at redemption.

Their victory over Old Geelong surprised many, as they wrestled the momentum early and continued on for a fine win on the eve of playing the Oggers in the elimination final next weekend. Whether there were games being played by the Old Geelong coaching staff is not a matter I bother to deal with. Essentially, finals are just another 22 on 22 battle, with season momentum playing a huge role in how they end up playing out. I’ll detail the imminent battle later on this article. The weekend’s game saw SMS burst from the blocks, racing to a 26 points lead at quarter time. ‘Bucky Done Gun’ Puruntatameri booted 6, with Nick Baum tremendous out of defence. Despite going down by 26, the undermanned Old Geelong had a strong showing from McMeel and Wood with 4 each.

Old Mentonians finished their season strongly with a 17 point win over the exhausted NOBS/St Pats side. This will mark the final loss for NOBS/St Pats in the current form with a pending name change to Brunswick firmly on the cards. Matt Keown capped off an outstanding season and an outstanding career (it was announced pregame that it would be his, and the great Ron Rooney’s final game) with 5 goals, whilst Bence kicked 3 for the defeated side. For Old Mentonians, Conlon was irrepressible in attack with 7, supported well by Bruno Rossi who marked strongly and booted 3 majors.

Ormond will enter finals brimming with confidence after they withstood a strong Prahran Assumption challenge, to win by 21 points. Whilst the game was somewhat of a dead rubber, Ormond would have been keen to send a message to their competitors and Prahran Assumption wanted 5th spot. Gerard Hogarth was dangerous for the Double Blues, kicking 6 and creating a firm presence. James Musster is a genuine smoky for the league medal with another outstanding showing. For Ormond, they had plenty of contributors in another even performance. Can they be beaten? On current form, they are a very tough proposition. Sam Barnes, who has returned from a 2014 exodus, was adjudged best afield.

An emotional week for Kew and Bulleen Templestowe saw both sides fall short of their respective opponents. For two proud clubs, it was just nice to see some footy played. Bulleen Templestowe were beaten by six goals against Yarra Valley at Ted Ajani. Without Cherbakof and Florance, the Bullants didn’t have the cattle to go with the Bushrangers. Jordan Canham kicked 5 for the victors, who have finished a disappointing season well, as Tom Balme made an impact in his first game in the seniors for the Bullants.

For Kew, Whitefriars were the team who beat the Bears, who are out of sorts. Without Brazzale, Maibaum and a host of other players, Kew were overrun by a dogged and gritty effort from a hungry young side. Early on, Alexander Marcello was unstoppable, kicking a couple in the first stanza as Whitefriars raced to an early lead. In the third quarter, Kew fought back to the lead with Andrew ‘DONK’ Doxey booting 3 and Tim ‘BWS’ Allman in his best game for the year, with 4. Despite this resurgence, the Friar lads combined very well together. Mitch Geilings was impressive off the wing and Sean Currie’s hands were crisp, as he took a number of strong pack marks. Much respect was shown between the two sides at the end of the game with a group photo that is featured in this week’s For the Love of the Game.

I’m joined by former Adelaide Crows living legend Wayne ‘Weed’ Weidemann as we preview a bumper first week of finals in Division 1. Two sides come into the finals in form, the other two are struggling somewhat, so it is a really intriguing narrative.

In the crunch elimination final, Old Geelong and St Mary’s Salesian will battle it out for the second successive week at Waverley Oval (2PM, Saturday). St Mary’s Salesian enters the game with five wins on the trot, and a victory over Old Geelong in Round 18. Mentally, they have the edge, however Old Geelong were without a few of their stars in the game just passed, including my tip for the league medal Colby O’Brien. The Saints are a strong side. They have players of the ilk of Jackson Strangward, Josh Tanner and the much improved Harry Angley. However, Old Geelong are mobile, well drilled and a hard team to stop when they get a run on. Callum Wood and Jack McMeel have to be subdued if St Mary’s Salesian are going to wrestle this one away. For mine, Old Geelong’s forward line will prove the difference.

In the Second Semi Final at VAFA HQ – Sportscover Arena (2PM, Saturday), Ormond (1st) and Kew (2nd) will fight out in a classic match up. Kew has lost 4 of its last 6, whilst Ormond has not lost since Kew smashed them at E. E. Gunn in Round 10. Ormond is in a firm position to go straight back to Premier C next season, and are warm favourites in this encounter. However, do not rule out Kew, who has considerable September experience and plenty of players with solid resumes. Whether Andrew Brazzale plays is unknown, however Kinsella, Margaritas and Bishop are all match winners. For Ormond, Chisholm and Martinov will be a handful, and the Simons are quality.