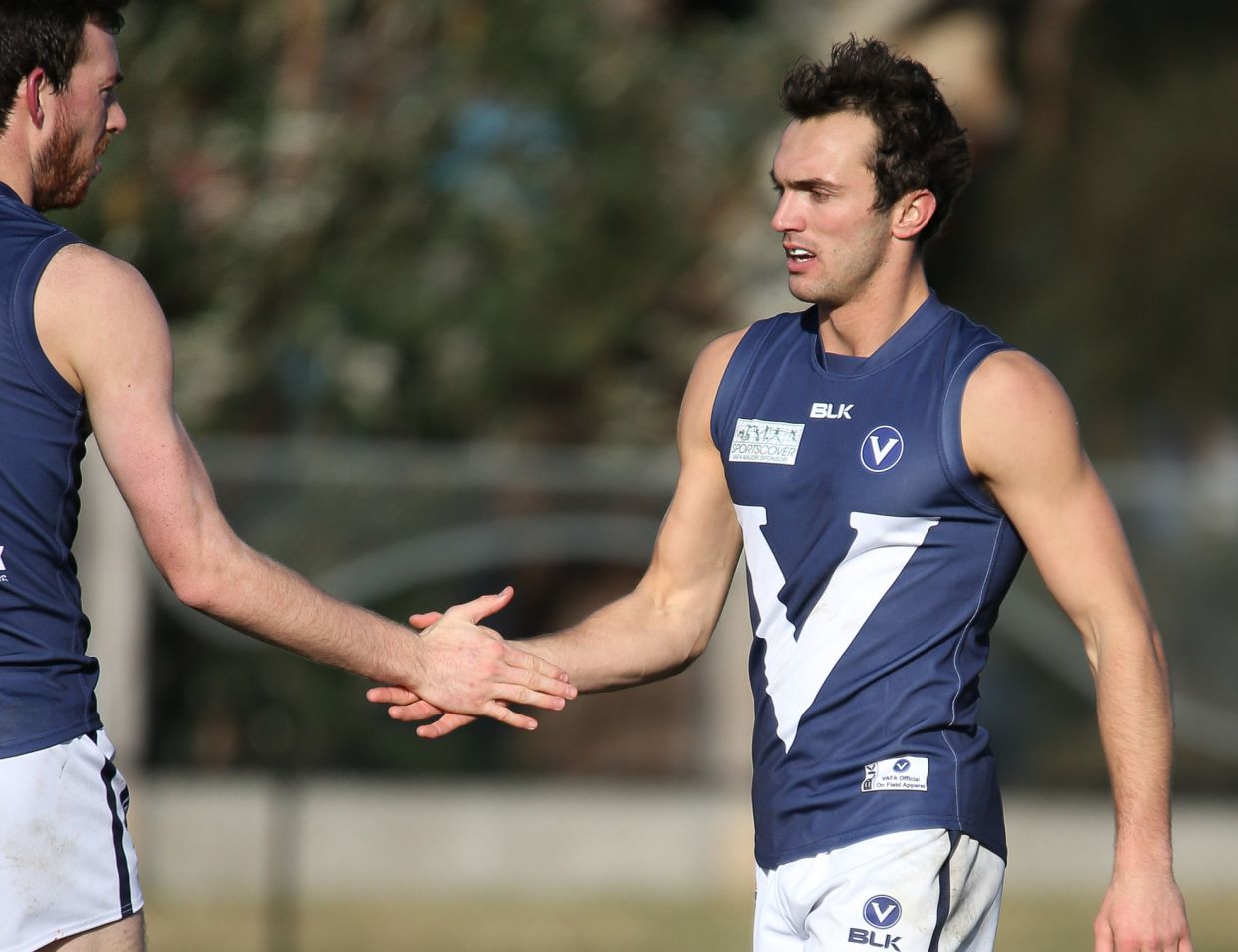 Division 1 Team of the Year

Old Mentonians are officially the first club promoted to Premier C this season after recording a stirring nine-point victory over Old Geelong at Sportscover Arena. In doing so the Panthers have booked their spot in the Grand Final and ended the VAFA’s longest current streak in one section after spending 14 years in Division 1.  The Panthers trailed by 16 points at half time and then clawed it back to four points at the final break. Eventually, they managed to run over the Ogs in the last and clearly had more left in the tank going into the latter stages of the game. It was a great show of character by the Panthers, who had failed to knock over the Ogs in two previous attempts this season. Former Big V U/23 representative Dustan Mills was the star of the show with a dominant four-goal display, finding form at exactly the right time for Old Mentonians. Lewis Oliver and Comrey Edgeworth also played pivotal roles in the come from behind win. From the Ogs perspective, they now have to reset for a knockout preliminary final after losing grasp of a game they had control over. Tom Balcombe showed he is capable of stepping up on the big stage as he turned in a brilliant performance that featured two majors. Ryan Parsons was their only other multiple goal scorer and Sandon James continued his consistent form. PEGS now await the Ogs where a spot in Premier C and a grand final berth will be on the line.

PEGS has handed out a lesson in finals footy after they stunned Therry Penola to the tune of 62-points. PEGS jumped the Lions with a four goal to one opening term and then proceeded to kick six goals to none in the second to take a 52-point lead at the main break, all but sowing up their spot in the preliminary final. Therry managed to be competitive in the second half but it was all too late as PEGS’ dominant first half was enough to ensure a resounding victory. The match left a sour taste in the mouths of Lions supporters who have enjoyed a mostly positive 2016 after being relegated from Premier C. Tylar Vujanic kicked five and was the star in front of goal for PEGS, while Cam Livori and Ryan Jones had it on a string. Strong contributors were few and far between for Lions. However, Joel Costello capped off a great season with a strong game, as did Corey Bannister and Jarrod Bannister added two goals to his tally to finish on 75 goals for the year, a fantastic return from the premier key forward of the competition.

This Sunday at Bill Lawry Oval we are presented with a tantalising encounter between minor premiers Old Geelong and the in form PEGS. Old Geelong will feel confident following their 78-point demolition of PEGS in round 18, but as we all know finals footy is a completely different kettle of fish and anything could happen on Sunday in a game that is absolutely no certainty. Old Geelong has class all over the field, while PEGS rely heavily on their key forward and ruck stocks to provide most of the grunt work. This will be an enthralling clash. I’m going to play it safe and back the minor premiers to recapture their form and set up a grand final between the two most consistent sides of Division 1.

Lastly, this week is an extra special edition of The Amateur Footballer as the various teams of year are unveiled. I was tasked with the enjoyable yet strenuous job of coming up with Division 1’s team of the year.

Looking at the finished product I am struggling to find a weakness. There is a copious amount of talent across the 22 players selected who all specialise in their selected position. Therefore unfortunately some of the best forwards and midfielders couldn’t quite sneak into the side. As always there are going to be some players to miss out who are extremely unlucky. Special mentions must go out to Ben Ratcliffe (Therry Penola), Lachlan Ezard (Brunswick NOBSPC), Mitch Woods (St Mary’s Salesian), Hugh Mackay (Old Geelong), Brad Jones (PEGS), Adam Pattison (Old Paradians) and Michael Nitas (Whitefriars). Each player selected truly deserves their spot. Congratulations!

Also, well done to the coach of the TOTY, Luke Mahoney. When trying to pick a coach for this side, I wanted to select someone who portrayed the ability to inspire and get the absolute best out of his charges. Mahoney was certainly able to do this within the final six weeks of the season as he led his club outside the relegation zone.

Division 1 Team of the Year