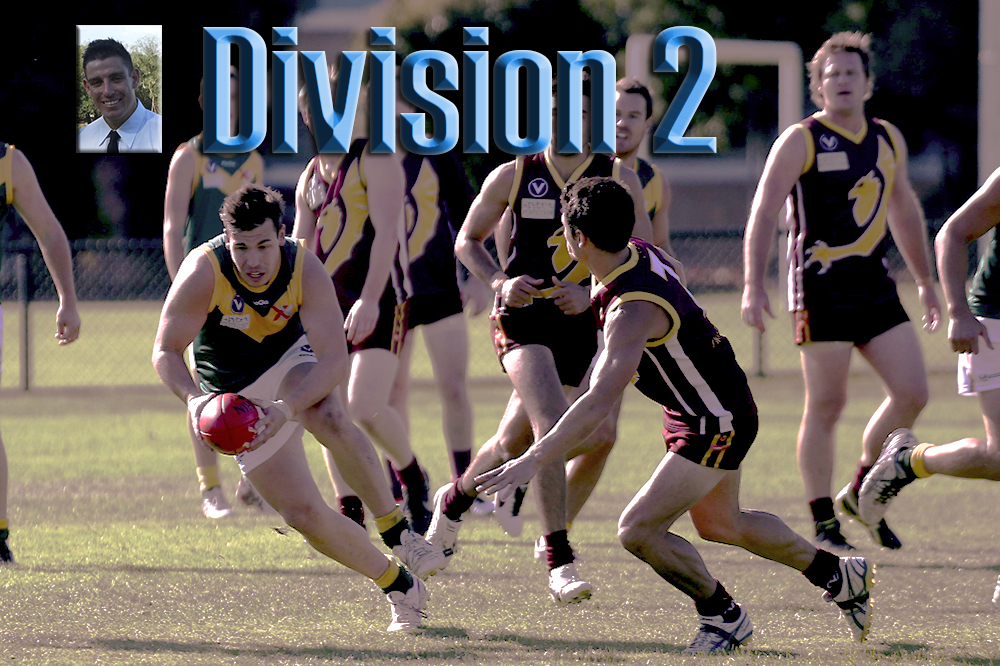 Round 5 – WE’VE GOT THE CLOSE ONE
Emmaus St Leos vs South Melbourne Districts
It was an overcast and breezy day down at Bennettswood Reserve and this match presented a great chance for both sides. For South Melbourne it was a chance to build on last week’s form and for the Two Blues it was another chance to open their account for 2013. In what would be a dour scrappy affair, Emmaus St Leos started well and went into quarter time with a handy 15 point lead. The match turned into an arm wrestle and South Melbourne fought back in the second quarter cutting the deficit to seven points at the main break. Both sides traded blows in the third, kicking two goals each but due to inaccuracy in front of goal neither side could gain the ascendancy. The game went up a notch in the final term with the lead changing several times, and after trailing for the majority of the day South Melbourne grabbed the lead with five minutes remaining. In a frantic final three minutes the Two Blues were awarded a dubious free kick 20 metres but on the boundary line. It was heart in mouth stuff, but the kick fell short and was rushed through for a point. South Melbourne held on in an absolute nail biter for a four point victory.
Old Eltham vs St Johns
This game presented another great test for St Johns to continue their resurgence under new coach Steve Ware. Old Eltham had other ideas, and like last week wanted to kill the contest early. In a blistering seven goal first quarter, the Turtles dominated the midfield and their good work up the field was converted on the scoreboard with spearhead Sabastian Ciavola kicking three goals. Ciavola would finish with five goals, but in an intriguing duel, split the points with resolute St Johns’ defender Adrian Pickering. St Johns’ intensity and pressure around the ball was non-existent – thankfully for the JOCs – until the second quarter. It started in the midfield where they won the clearances but couldn’t convert their good work into scoreboard pressure and trailed by 25 points at the half. St Johns kept the pressure on Old Eltham and kicked six goals to three in the second half. The last quarter was a classic, it seemed the result hinged on every contest, Old Eltham prevailing by four points. St Johns will put this down to an opportunity missed, they kicked 4.4 to 2.1 in the last quarter, leaving Old Eltham undefeated in 2013. Turtles’ ruckman Mathew Crooks was excellent and impassable all-day while for the JOCs, Kane Arnold was creative through the midfield and Glenn Costas was balanced and elusive up forward.
St Mary’s Salesians vs Monash Gryphons
For the third consecutive game, St Mary’s Salesian were involved in a game decided by less than a kick. The undefeated Saints started like a bullet with two goals in the first 45 secs. But it was Monash who played the better footy in the first half, they controlled the midfield battle and held St Mary’s goalless for the rest of the half. Saints came out and lifted their intensity after halftime but inaccuracy in front of goal cost them, kicking 4.12 for the term. Monash made the most of their opportunities through Rich Hummerston who kicked three goals in a ten minute burst. The Gryphons held a three goal lead at the start of a tense final term. Saints had a chance at the 27 min mark to hit the front but the kick went wide. Saints’ forward Jackson Strangward nearly dragged his team over the line with three last quarter goals but the Gryphons would not be denied and held on for a steely four point victory. After a slow start to the year Monash recorded their first win and hope to build on that with the possibility of Russell Robertson making his long awaited debut.
Ivanhoe vs Yarra Valley
Both sides were keen to put disappointing round 3 losses behind them and regain form. At home it was Ivanhoe who came out the stronger, kicking five goals in the first quarter and held a 16 point lead at quarter-time. Yarra Valley reassessed, fought hard in the second quarter, kicked four goals to three and cut the deficit to ten points at the main break. The third quarter was a shoot-out, Ivanhoe kicking seven goals straight and the Bushrangers registering five of their own, Ivanhoe held a 20 point at ¾ time. The Magpies lifted and finished the stronger, kicking five last quarter goals to record a 44 point win and squared their win/loss ledger to 2 and 2. Magpies’ goal- kicking ace Ash Close was the main destroyer, slamming through seven majors.
Therry Penola vs Old Paradians
Therry Penola at home was always going to be an uphill battle for Old Paradians and after conceding 5.4 to 0.0 in the first quarter, a belting was on the cards. In stark contrast to the first, Paradians hit back and kicked four goals to one in the second quarter and the Lions went into the half holding a 17 point lead. Paradians wouldn’t go away and in a tight third quarter, Therry Penola kicked four goals to three and led by 22 points at ¾ time. Paradians felt an upset on the cards and got within ten points but couldn’t land the knockout blow and the Lions had an unconvincing 22 point win. Old Paradians led by David Boundy (4 goals) outscored the Lions by two goals after quarter-time, and will take that form into this week’s game against cellar dwellers Emmaus St Leos.