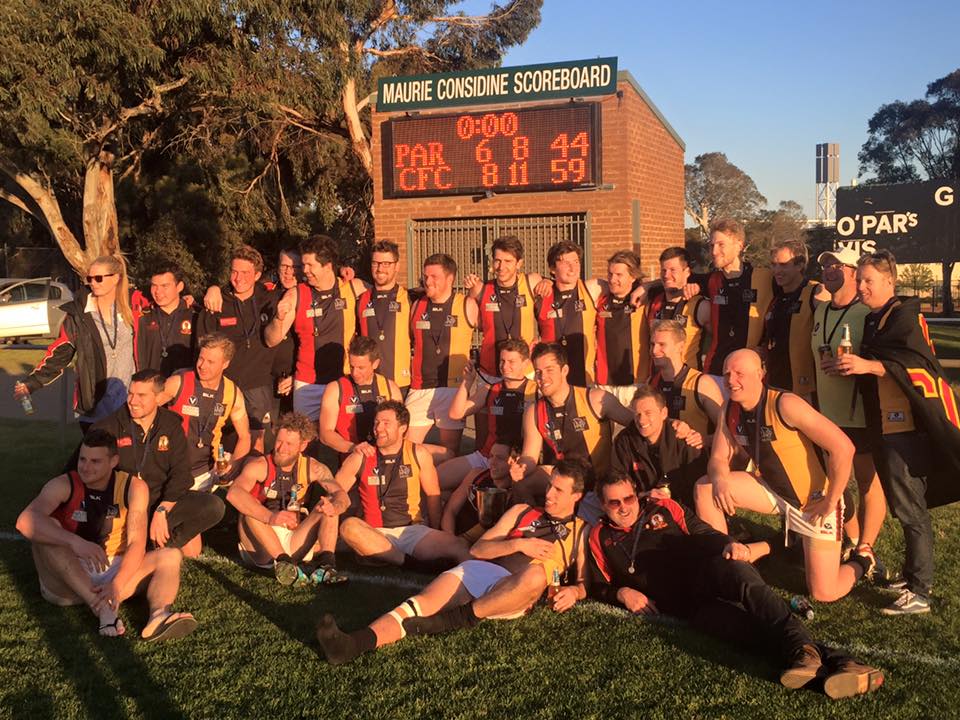 I’ve gone to adjective world on numerous occasions this year when describing the Canterbury Cobras. And while arguably some might have been a touch embellished, the Cobras on Saturday proved that they genuinely were the best side in the competition in 2015 in perhaps the strongest pool of Division four clubs in recent history.

After an early week venue change, Garvey Oval would be the canvas for the two sides to ply their craft. The deck was in it’s usual near perfect condition, the sun shining, a deceptively strong breeze favouring the car park end a strong crowd, many of which exposing their pasty calves after the long winter.

Within moments of the first bounce, to the naive eye, it was impossible to detect the differences in seasons the two sides had experienced.

Canterbury, after so nearly finding promotion in their first year were installed by many as favourites to take the chocolates this year. And true to form, they played up to the lofty expectations, losses in the last round of the season and the semi-final their only blemishes for the year. They’ve been the best team all year, and deserved Grand Finalists.

Parkside on the other hand, the great unknown at seasons start, have gone about things a little differently. After losing to Canterbury by the smallest of margins in the first round, there stocks took a hit, their season peppered with disappointing loses, a stark contrast to the season of their Grand Finalist counterparts.

After scraping through to the top six, many, myself included, didn’t give Parkside a chance. While we were all singing the praises of Canterbury and Westbourne, Parkside were unassumingly going about their business and unbeknownst to the rest of the competition, taking aim at the ultimate accolade.

But that didn’t matter now.

Kicking with the breeze, it was paramount that Parkside got off to a great start, and while they did well to negate Canterbury’s pace early, they didn’t get the scoreboard pressure they wanted or needed. Surprisingly, Parkside did better against the breeze than with it, their silky skills and pace coming to the fore in the second term, Shane ‘Scott’ McLaren was, as usual, the ring leader, getting his hands on the pill at will, at leaving a trail of fledgling opponents in his wake. While Jeremy Gillen and Cam Woods started firing for Canterbury.

Canterbury kicked the first goal of the second half, stretching the lead to 26 points. With alarm bells ringing, and the lead becoming a concern, to Parkside’s credit, they dug their nails in and wrestled back momentum. Darren Gresham was finding a lot of footy, and Clint Virgona lead from the front.

But despite the hard work, and winning the quarter, the deficit was still 17 points, and with Canterbury kicking to the scoring end for the entire day across both matches, it made for worrying signs.

Joe D’Angelo pleaded with his troops at the final break to summon the same belief that has seen them accelerate from barely scrape through to the finals to becoming grand finalists. A plea the players dutifully acknowledged. Kicking the first of the quarter, and controlling play for most of the last quarter.

The margin got within 10 points with 7 minutes to play, and it could have been less had Parkside converted their opportunities in front of goal.

But Canterbury is the best side in the competition for a reason. With calm heads, they unassumingly went about their business. It was as if they were completely unaware of the scoreline. Lachlan Chapman was a giant in the last term, winning every contest he went to, and ensuring the lead would always be protected. Tommy Pearce and Tim Nichols were sensational down back, thwarting countless attacks and the little Nick Szabo running around like a Jack Russell.

It’s been a tough decade or so for the Canterbury. Spanning across three different leagues, they’ve spent far more time at the lower echelons of the ladder than the top. On Saturday at 4:45pm when the siren echoed across Garvey Oval for the final time of the season, all that misery ended.

The Cobras had completed the dream season, two flags, and a lifetime of memories. Both sides will prove significant handfuls in Division 3, particularly considering that the two strongest sides within that division have both moved up to Division 2.