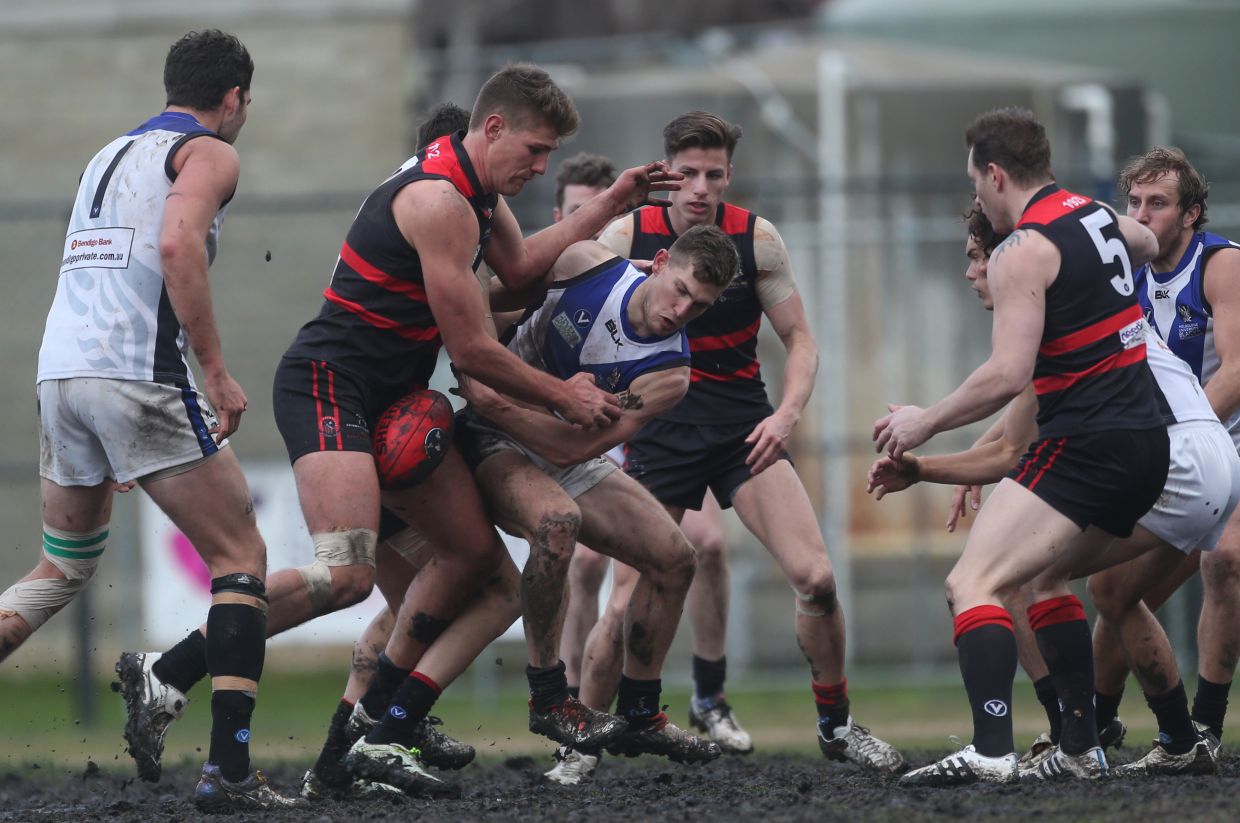 Finals were locked in. Relegation sorted. The only thing which could have changed in the last round of William Buck Premier football was the positioning of the four finals-bound teams with regards to the double chance.

And don’t for a second think the double chance isn’t important. Over the past six Premier seasons, only Collegians has made the grand final after finishing outside the two (fourth in 2014). The Lions were unable to attain the ultimate prize that day, giving further emphasis to the importance of the fall back should one be unable to claim victory in the second semi-final.

At the half way mark of both the Uni Derby and Toorak Park clash, one could have been forgiven for thinking the order of the four (OT, OX, Blues, Blacks) was not going to change. It looked as though the loser of the T’s and Xavs would be safe as the Blacks did a number on the Blues and led by 27 points with 12 scoring shots to five.

How we were wrong.

While the Blues struggled to get their hands on the ball forward of centre with the majority of first-half play in the Blacks 50, momentum swung as Blues’ Will Cuningham, Marshall Rippon and Paul Nunn dominated possession. Closing the gap to 11 points at the last break, a Tom Quinn over-the-shoulder stunner gave the Blues the lead with five minutes remaining. Despite having a chance in the last 15 seconds, the Blacks were unable to capitalise as the Blues celebrated their return to second position on the ladder. Tom McKenzie, Clayton Hinkley and Cam Williams kicked two goals each for the Blues as they continue to outscore opponents in the absence of Tim Gaeppen. They’ll now play the T’s for the chance to progress straight to the grand final, while the Blacks will face Xavs in a do-or-die elimination final.

Ultimately, Saturday was a disappointing day for Xavs. Not necessarily for the loss to the T’s but because of injuries to key personnel which seriously jeopardises their finals campaign. John Shaw, Ben Kennedy and Nick Serafini all failed to run out the match due to injuries suffered throughout the hard-fought four quarter affair. Kennedy and Serafini were both on ice prior to the main break, while Shaw hurt his hamstring in the second half. While the prognosis of both Kennedy and Serafini are currently unknown, Shaw is likely to be out until grand final weekend. Despite these injuries, Xavs took it up to the T’s until the final siren. Trailing by five points at the first break, Seb Nicolosi caught fire and sent home three majors in the first six minutes of the second term. They were irrepressible in that short burst and, had it not been for a knee knock which prematurely ended Nicolosi’s purple patch, they may have extended the winning margin. From there, the T’s were able to keep Xavs at an arm’s length with Andrew Kyriacopoulos and Gabe Hamilton finding plenty of it and Jack Osborn returning to his elite mid-season form. Ned Hunt remains a concern with an injured back putting a line through his past two weeks and Nicolosi will be monitored closely, but the T’s will now face the Blues for a shot at redemption. He may have been held goalless over the weekend, but Matt Handley officially took out the William Buck Premier goal kicking award for the second consecutive year. His 51 majors outperformed teammate Brendan Goss (47) and dynamic OMs and Blacks duo, Al Armstrong (41) and Lochy Dornauf (41).

De La Salle, St Kevin’s and Collegians each concluded their 2016 campaigns on a high with Round 18 victories.

With the conclusions of their respective seasons, there were a number of retirements from those three matches as Andrew Scott (Coll), Steven Salopek (SKOB) and Leigh Harrison (DLS) bid farewell amongst a host of other VAFA stars. A comprehensive write-up on each retirement will be released later in the year, but I wanted to congratulate each player who has contributed so significantly to their club’s individual success.

As for now, we set ourselves for two blockbuster semi-finals between the best four teams in the competition.

The T’s have won both home and away matches against the Blues this season, including the Uni side’s only loss on home soil. Dig a little deeper and one will see those two wins have been decided by one and five points, respectively. Both sides have played against OMs on Sportscover Arena (venue of this weekend’s final) and both have recorded victories. The T’s are dangerous in short bursts and have proved they can win games on the back of dominant one or two quarter efforts. The Blues are defensive juggernauts and grind out victories by stifling their opponent’s scoring ability, averaging just 57 points against. They both have outstanding midfields, with the T’s run and carry in stark contrast to the Blues contested ball.

Sunday’s elimination final will come down to the wire. No two ways about it. Historically, Xavs play Sportscover Arena better than any other team in the competition and proved their love for the wide expanses of EP with a 61-point win against OMs in Round 12. They boast the one and two goal kickers in the competition and Tomi Johnstone is a weapon. Conversely, the Blacks lost at Sportscover earlier this year, but have the Cam Roberts and Bede Mahon-factor; two finals-proven stars who know how to get it done. From the outside, both game styles are similar with contested ball and retention of possession high on the agenda. Whatever you may have planned on Sunday that doesn’t involve VAFA football, cancel it.