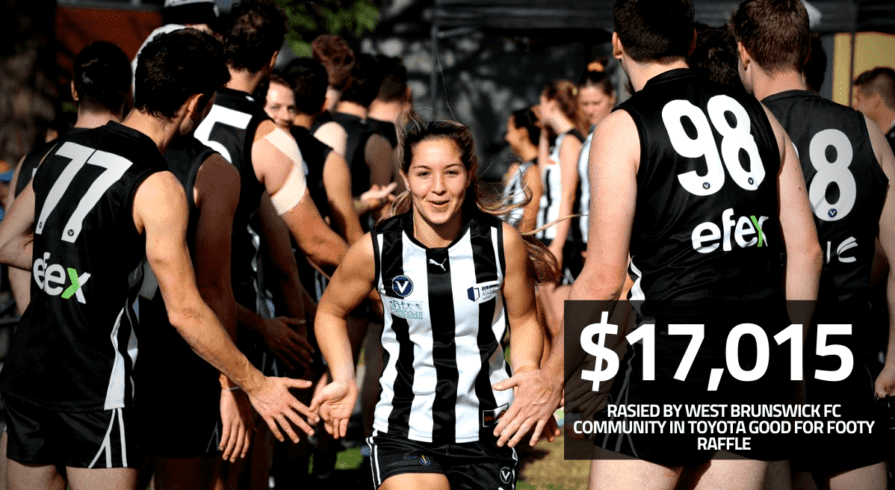 Is it really that time of year again?

Shop fronts are beginning to display arrangements of tinsel and flashing lights, Instagram is flooded with heavily filtered Christmas trees, and my sister is sending the obligatory Snapchat with a Hi-5 Christmas album blaring in the background.

And what’s that? Clubs are back at pre-season training? Yep, Christmas must be approaching.

It’s also the time of year when VAFA Media usually releases a list of highlights and achievements from clubs and players that occurred throughout the year. They often range from on-field success to….on-field success. Sometimes, we mix it up with stories of on-field success.

Despite the cancellation of this year’s season, it’s important to recognise the accomplishments and positive news stories that did occur in 2020 (yes, there were some). Rather than a list of on-field successes, think of this as more of a Newsroom-inspired highlights show featuring positive stories from the past 12 months that may been missed – or simply deserve another shoutout – due to the ongoing impact of Covid-19.

And in the spirit of the festive season, I’ll be touching on 12 – you know, the whole 12 days of Christmas hullabaloo. Anyway, let’s go…

This list is in no particular order, but if it was, West Brunswick’s phenomenal effort in the Good For Footy Raffle would be teetering on the edge of first place. After raising less than $1000 in 2019, the Westies set a target of $5000 this time around but, as President Beth Cook said, they “clearly underestimated the tenacity and spirit of our players”. 104 members sold over 3400 tickets for a total of $17,015 – the third-highest tally in Victoria.

In late March, when the innate positivity of Victorians still gave hope to the commencement of a season, the VAFA announced the seven club volunteers who received 2020 COM Awards. Due to the abandonment of the Season Launch, Kylie da Fonte (MHSOB), Phil Skeggs (Ivanhoe AFC), Stephen Manning (Ormond AFC), John Robinson (VAFA), Scott Williams (Caulfield Grammarians), Terry Symons (Parkdale Vultures) and John Pilkington (VAFA Tribunal) were never properly recognised for their outstanding contributions. There are, however, a few rumblings going around that suggest the 2021 Season Launch will be well worth the wait…

I really can’t explain how incredible Derv’s performance was in 2020. The VAFA’s Umpire Operations Manager relocated to a much more desirable part of the country for the AFL season and dominated his chosen craft so much that he was one of just two goal umpires selected for the Richmond & Geelong AFL GF. Further to this, Dervs was named the All-Australian Goal Umpire, meaning he was quite literally the best in the land. Numero uno. Amazing performance.

Masala is one of the great stories of Australian football after entering the VAFA in 2013. There have always been players of multicultural background in the VAFA, and indeed the competition has regularly celebrated Multicultural Round, but the arrival of Masala – a truly multicultural club – brought something different. Earlier this year, the club took the next step in their development by announcing a newly formed relationship with North Dandenong Juniors. While this assists the junior side after it fell into recess last year, it also provides a clear pathway and recruiting pool for Masala – a definite win-win.

Caulfield Grammarians created their own BEER

2020 was a milestone year for at least two of our clubs, with Caulfield Grammarians and Old Melburnians celebrating their 100-year anniversaries. Despite having to postpone their major events, the Fields released their own Centenary Lager and accompanying stubby holder. In the words of former President, Peter Small, upon taking his first sip – “magnificent.”

While the competitive nature of VAFA clubs was put on the backburner for the best part of the year, Brunswick FC, MUWFC, Preston Bullants and West Brunswick kept their blood pressure elevated by engaging in their own Blood Drive Challenge. A three-round fixtured season, scores were calculated based on donations during each two-week period, and once again, it was the Westies showcasing their dominance by going through undefeated. More than anything, the four clubs each finished in the top eight in the state and made 178 donations between them – enough to save 534 lives.

Fitzroy FC’s history is as rich as any in Australian football, and Bronte’s appointment as Senior Women’s Coach is another notch on their progressive belt.  When the club made the announcement in September, Bronte was quoted as saying “on a scale of 1-10, I’m somewhere past 12 at this point” -that’s the kind of enthusiasm we all need!

The introduction of the ‘Clubs in Focus’ Podcasts allowed VAFA Media to uncover some incredible historical stories from our clubs’ current members and those who have been there for years. It’s been a great way to celebrate the significant feats of these clubs and, perhaps even more entertaining, to find out what they used to get up to under the cover of darkness – the real stories. From Ross Stevenson (Uni Reds) being the first player in Australian football to introduce video evidence at the tribunal in 1978 after a camera picked up a Thornbury player – and former boxer – giving Ross a well-directed right hook to the jaw that resulted in an eight-week ban, to an Ormond player slapping a meat pie into the face of a Uni Blues opponent in 1967. We heard that Old Xaverians led a chorus of Amateur teams opposed to the inclusion of a Collingwood reserves side into the competition, while Kevin McLean and the Old Ivanhoe coaching panel engaged in a cheeky wager on the winner of their match with the opposition coaching staff in the 90’s. A personal favourite was the brawl West Brunswick players had with Coburg following the 1982 C Section Grand Final – and the Westies weren’t even playing! These are the type of entertaining stories that will be re-told in social rooms and at club bars for years to come.

Speaking of the CIF Podcast Series, I was personally concerned for the wellbeing of our host, Joe Pignataro, when the opportunity arose to delve into the history of his beloved Snow Dogs. I mean, of all the episodes where he might finally explode with excitement, this was it. Thankfully, he pulled through the interviews with Simon Madden, Michael Perrett, Veronica Moloney, Danny Byrne and Nathan Kazuro. Although, they recently became the first club to notch 1000 listens…

Finally, a real highlight for many throughout the year was the announcement of the VAFA’s over 35’s competition in 2021. The proposed 9-round fixture gained a lot of traction and when we asked the Twitter community for their preferred name, it was tight between Masters (35%), Veterans (31%), and Supers (23%). Personally, the suggestion of VAFA GOATS got my attention.

As I wrap up, the 2020 Annual Report has been finalised and will be released soon with the AGM taking place this Monday. Make sure you stay tuned to VAFA Media over the coming weeks for the latest from our President and CEO, but more than anything, enjoy a well-earned Centenary Lager, outdoors and without face masks.