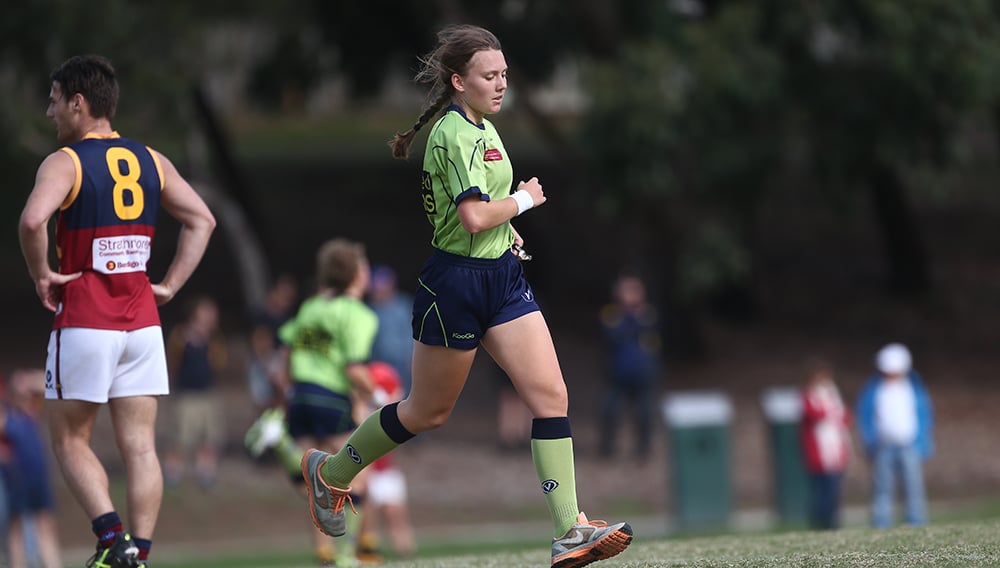 This week the focus shifts to all of our remarkable VAFA umpires. There are two segments to umpiring in the VAFA, the first are those who are organised by the VAFA and train each week at the Sportscover Arena and the other segment is the volunteer club umpires who umpire the reserves in the Division sections and goal and boundary in the seniors. Two wonderful groups who are equally as important as the other.

Each week at Sportscover Arena we have up to 200 umpires training.  Immediately you can see the need for Sportscover Arena as the central home of these umpires.  Currently we have 78 goal umpires on the list and many of these have been getting trained up so that they are capable of performing the duty in a senior match.  In the next few weeks we believe we will have enough goal umpires for Premier down to Division 2 in the seniors, Under 19 premier and a sprinkling through the other sections.

Our current number of boundary umpires is at 118 which obviously means we can get more of these throughout the various competitions. Boundary umpires are a great way to get young umpires initiated into umpiring and each year we aim to transfer about 10 to 12 of these onto the field but in reality only achieve about 6.

Of course, the major area of concentration for the VAFA is to ensure we have enough field umpires for all the sections. Currently we have 152 registered field umpires for 122 appointments. This is an incredible logistical exercise that gets managed each week.  For a start we usually have about twenty unavailable for various reasons, then add the fact that many use public transport, have Saturday morning sport, get driven by parents or for whatever reason can only umpire at a certain time that week.

Added to this we have approximately 75 appointments for the pool umpires. These are specifically designated for the Premier Sections Reserves, Thirds and Club XVIII. And the final component is the 45 Division reserves matches which are officiated by our club umpires.

As you can imagine when you combine all the field, goal, boundary, pool and club umpires it is an incredibly complex operation that gets completed each week in the office.  We owe a great deal of appreciation to the two Brians Goodman and Woodhead in the office, and each of the coaches who make the appointments.

One is the logistics but the other is the coaching and training.  Tony Hales has been the head coach for the past six years and has done a superb job. Anyone who watches the premier Section should have noticed the youthful, athletic profile that our field umpires display.  Many of Tony’s umpires are now leading the way in the VAFA with promising AFL careers beckoning.  None moreso than last year’s William Buck Premier Grand Final Umpire, 17 year old Peter Bailles. Peter became our youngest ever Premier Grand Final umpire and is this year with the VFL.  Tony has four assistants who together coach the field umpires.  They are joined by the head coach of Goals, Bernie Jephson and boundary Ryan O’Shea.

The VAFA makes a huge commitment to umpiring and each of these foot soldiers are greatly valued and respected by our community; however, we are not infallible.  It is so disappointing that each Monday we have to follow up issues with clubs about players or supporters overstepping the mark.  Abusing umpires is from a bygone era and completely not acceptable.  In typical humility as it is umpire appreciation round, they asked that nothing special be done for them.  They just want to blend into the match and be part of it.

This weekend at the end of the match in the social club it may be appropriate to raise a glass for the umps.