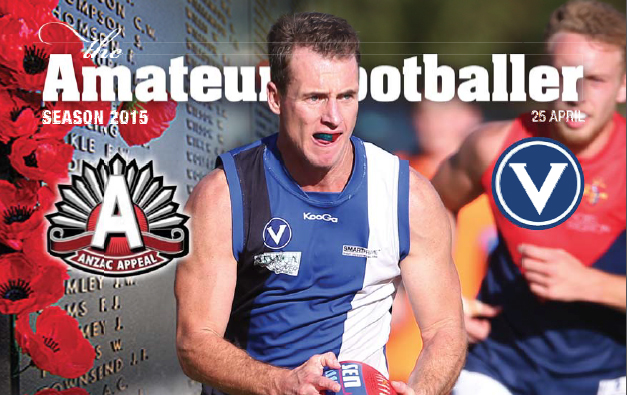 Editorial: Lest We Forget

What an honour it is to be able to participate in our great Australian game on the same day we commemorate the landing of Australian and New Zealand soldiers at ANZAC Cove on April 25, 1915. ANZAC Day is our national day of remembrance for all Australians who have served in wars, conflicts and peacekeeping operations.

At each of our games, a service will be conducted, predominantly during the interval between the reserves and the seniors, which begins with the lowering of the flags to half-mast. The laying of a wreath or poppies, the Ode is pronounced followed by the Last Post, a minute’s silence, the flags are raised to the Reveille and finally we join to sing the National Anthem.

A suitable donation from any sporting event in the Melbourne metropolitan area must be donated to the ANZAC Day Proceeds Fund. These donations go towards supporting veterans’ welfare in Victoria. Hopefully all of our supporters and players are able to support this day financially, especially as the entertainment provided by all of our players don’t have an admission charge.

The Victoria Cross was originally the British Empire’s highest award for bravery in wartime and is now Australia’s pre-eminent award for conspicuous gallantry in combat. Two VAFA players have been awarded a VC, Flight Lieutenant William (Bill) Ellis Newton and Captain Robert (Bob) Cuthbert Grieve and I would like to share their story.

William Ellis Newton from Unit 22 squadron was posthumously awarded the Victoria Cross on 19 October 1943 for his actions as a bomber pilot on 16-18 March 1943 in the South West Pacific theatre of Word War II.  Despite intense anti-aircraft fire, he pressed home a series of attacks on the Salamaua Isthmus, the last of which saw him forced to ditch his aircraft in the sea. Newton was still officially posted as missing when the award was made in October 1943. It later emerged that he had been taken captive by the Japanese, and executed by beheading on 29 March.

Newton’s mother presented his Victoria Cross to the Australian War Memorial in Canberra where it is on permanent display with 60 other Imperial Victoria Cross medals.

Newton played for Old Melburnians – 6 games in 1939 and 2 games in 1940. He may have played prior to 1939 but VAFA records are not available before that year.

Robert Cuthbert Grieve from Unit A Company, 37th Battalion, 3rd Division was awarded the Victoria Cross following the Battle of Messines in Belgium on 7 June 1917. His citation reads:

On 7 June 1917 at Messines, Belgium, during an attack on the enemy’s position, and after his own company had suffered very heavy casualties, Captain Grieve located two hostile machine-guns which were holding up his advance. Under continuous heavy fire from the two guns, he succeeded in bombing and killing the two gun crews, then reorganised the remnants of his own company and gained his original objective. Captain Grieve set a splendid example and when he finally fell, wounded, the position had been secured.

In 1959, Grieve’s family presented his Victoria Cross to Wesley College and it is now on permanent display at the Shrine of Remembrance.

The centenary history of the Collegians Football Club states that Grieve first played for Collegians in 1911 and returned to again play after the Great War. He was on the committee at Collegians 1911-13, delegate 1912 and vice-president 1925-49.

These are just two of the thousands of VAFA community members who have given service to our country during all of the wars and conflicts. Today we remember them all.

The VAFA will this week play a full round of matches on ANZAC Day. All VAFA clubs have been give permission by the minister to host a service and below are some links to assist clubs.

The Victorian ANZAC Centenary website provides a series of links which will hopefully assist you with your ceremony format query.

This link should assist with your query (the other links below are the pages between the home page and this page).  The suggested event outline in this link can be used in part or full. There is also a link on this page to download The Last Post:

Holding a sporting event page which has a link to the ‘Information for sporting groups flyer’: