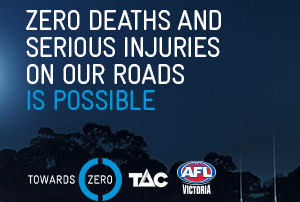 Editorial: Towards Zero Round

This weekend marks the inaugural kick off the TAC Towards Zero Round – a state-wide fixtured round for all grassroots and community football and netball clubs.

The TAC has had a 28-year long partnership with AFL Victoria, and through this partnership, they will be able to share the message of road safety with more than 400,000 Victorians who are involved in local sporting clubs.

As the father of two young men who are soon to obtain their learners permit, this round is of significant relevance and importance for me. There are way too many people either injured or killed on our roads, and as a parent, it is incumbent upon me to help educate my sons about the important issues of road safety.

The TAC Towards Zero Round will see more than 1,000 local football captains, as well as other team members, wearing the number ‘0’ on their backs instead of their usual jumper number as a powerful symbol of what we are all striving for.

TAC Acting CEO Bruce Crossett said the TAC Towards Zero Round aims to highlight the real value of reaching zero deaths on our roads and why it’s something all Victorians should be working towards.

“Grassroots football and netball clubs are the lifeblood of their communities and I’m sure you would be hard pressed to find someone involved who hasn’t been affected by road trauma.” Mr. Crossett said.

“We believe that zero is the only acceptable number of deaths on our roads, but we need everyone to play their part…this round is putting road safety at the fore and we’re asking everyone to prioritise safety to make sure that every journey is a safe one,” he said.

“Recent research from La Trobe University and AFL Victoria has highlighted the true value football clubs have for their wider community, revealing that for every player, football clubs reach 10 people in their community.”

“The thousands of football and netball players right across the state cover hundreds of kilometres to games throughout the season,” Mr. Crossett said.

“Through our partnership with AFL Victoria and the launch of the TAC Towards Zero Round, we’re able to have a direct conversation with those Victorians about the role they play in making our roads safe and working towards zero deaths and serious injuries on our roads,” he said.

Alarmingly, 165 Victorians have already lost their lives on our roads this year, up from 104 for the same time last year (56% increase).

Tragically, 95 have occurred on regional roads compared with 52 for the same time last year.

So, as the 2019 inaugural TAC Towards Zero Round official kicks off, I’d like to take this opportunity to thank all of those in the VAFA community who have thrown their weight behind this campaign, and have put in some tremendous work with their grant applications. I would also like to commend them for their efforts in helping to promote the TAC’s road safety message to their players, supporters and communities through their social media activities and general participation in the round.