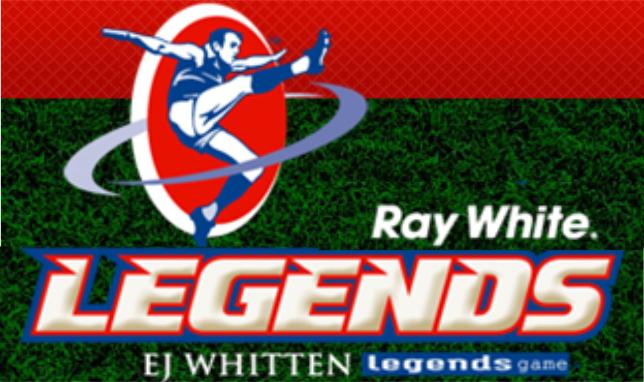 CALLING ALL LOCAL FOOTY HEROES
PLAY ALONGSIDE AFL LEGENDS
For those local footy heroes lamenting an AFL career that could have been, here’s your chance to show Kouta, the King and over forty other recently retired AFL champs exactly what you’ve got!
Nominations are now open for two local footy heroes to take to the field alongside AFL’s biggest names including Wayne Carey and Anthony Koutoufides in the Ray White EJ Whitten Legends Game at Etihad Stadium on Tuesday 3 July 2012.
With one Victorian and one All Stars jumper up for grabs in the State-of-Origin clash, the two lucky players will be selected for their passion, performance and commitment at a local club level.    Along with the chance to outshine their AFL idols, more than 25,000 people will be looking on from the stands as well as a huge primetime television audience to boot.
Now in its 17th year and having raised over $1.1 million dollars in support of prostate cancer research and awareness, the Ray White EJ Whitten Legends Game is steeped in history with many local footy legends providing memorable moments – Mornington player Simon Goosey’s swag of goals (2005), 74 year old footy veteran Cobber Rogers lining up on Sam Newman in 2010 and last year’s Play in the Game winners each kicking vital goals in the nail-biting game.
“We want players who love the game, put it all on the line for their team and have that touch of mongrel about them, just like the great Ted Whitten”, said Victorian Captain, Anthony Koutoufides, who is hoping for back to back wins over the All Stars’ Captain Wayne Carey.
Clubs, Leagues and individuals can nominate their local footy hero. Entrants must be registered player with a club to be eligible.
Enter online at www.legendsgame.com.au
Entries close 15 June 2012
About the Ray White EJ Whitten Legends Game
Held at Etihad Stadium in Melbourne, this annual event reunites recently retired champions of Australian Rules Football and commemorates the legacy of the great Ted Whitten, who passed away from prostate cancer, in a State of Origin football match between Victoria and the All Stars.  The E.J Whitten Foundation aims to increase national awareness of Prostate Cancer, promote early detection and raise funds for research into the disease.  With men often finding it difficult to talk about their health, footy laced with a touch of humour is great way to reach them.
Date: 3 July 2012 7.30pm
Where: Etihad Stadium
Tickets: www.ticketmaster.com.au