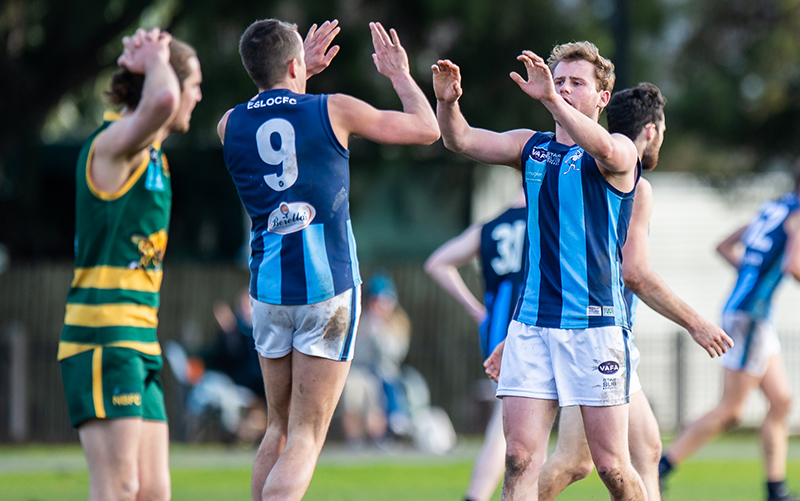 Emmaus St Leo’s were given a scare by North Brunswick at a bitterly cold Allard Park on Saturday, but ultimately left the field 30-point winners. The score line was constantly seesawing all day, despite the Bulls leading at both the Q1 and Q3 breaks, but nine goals to two in the final term sealed the deal for the Animals. Lawrence Virgo (3) found ample time in the forward line as his side’s second ruck option for the day, while Dan Hill (2), Nathan Bird (2) and Emerson Lemkau (2) contributed their own majors. Backman Baxter Newbegin unsurprisingly took top honours in a game where defensive presence was incredibly important for both teams. For the home side, Peter Butler kicked 3, Jake Horwood (2), Aydan Marriner (2) and Rhys Mehlstaubler (2) joined him on the scoreboard, and Gary Savage (1) was their best player.

It was a game set up as arguably the clash of the 2021 season so far, as Parkside welcomed Hawthorn AFC to Pitcher Park for a battle of 1 v 2 on the ladder. But a draw of 33 apiece at the final siren meant that no team took home the four points, with both sides maintaining their spot in the top 2. Just nine goals were kicked for the day with the Hawks booting two in Q4 to tie things up. The Hawks’ William Meehan (3) was the only multiple goal scorer for either side on the day, as teammates Aaron Downie (1) and Darcy Johnston (1) claimed the other two and Eamonn took best-on honours. For the Red Devils, Adamo Gargano, Lewis Daniels, Jai Swinger and Shane Doherty all contributed one major each, with Jonathan Friel taking number one spot on the best players list.

Richmond Central did their percentage a tonne of favours in beating an unfortunate Westbourne Grammarians outfit by 105 points at Kevin Bartlett Reserve on Saturday. The Snakes’ dynamic duo in Jake Munro and Jack Bilson appear to be unstoppable in the forward line this season, and it was no different against the Warriors, with the both of them kicking six and five majors respectively. Thomas Rivers (3) earned top spot on the best players list with his form in front of goals, while Benjamin Krieger joined him with two of his own. For the away side, Blake Charles, Daniel White, Jordan Doyle, and Benjamin Johnson all kicked a goal apiece as the latter took best-on honours.

Albert Park’s search for their first win of the season continues after being beaten by Canterbury at Canterbury Sportsground on the weekend. After jumping out of the gates and kicking six goals in the first term to be up by 30 points at quarter time, the Cobras were then stifled by a brave Falcons side and took a 21-point buffer into the second half. Thomas Lowden (3) once again topped the goalkickers list for Canterbury, as Arun Panjwani (2) hit the scoreboard and Nick Szabo (1) took top honours. It was certainly a much-improved effort from Albert Park, with Luke Childs kicking three majors and Raymond D’Lima (1) and Jack Lee their best.