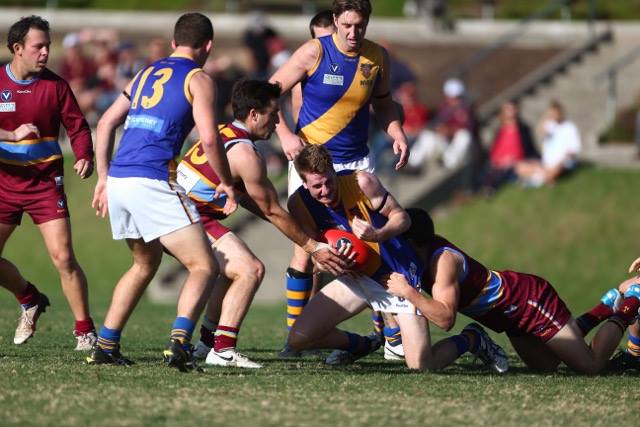 A spectacular opening round was on display across Premier C, with an average winning margin of 38 points across the five games. After the agonising wait for Round 1, teams were eager to put on show all the gritty work covered in pre-season. It was an opening round sure to bring back the supporters for Round 2 with six teams scoring more than 80 points and nine teams having more than 20 scoring shots, respectively.

Peninsula OB’s showed they are the real deal in 2016 and premiership contenders with their 65-point victory over Ormond. Stefan Barbour was dominant in the forward line for the Pirates as he booted home nine majors. The Pirates forward line shared the load as it was constantly kicked forward through James Fletcher and Sebastian Barbour, allowing Shaun Payze and Samuel Harrison to combine for nine goals. The game could have been much closer if it weren’t for the inaccurate goal kicking of Ormond, kicking nine majors in the second half after their one goal and eight points to half time. Matthew Martinov stood tall in his 250th game for Ormond as he kicked three of his side’s nine. Ormond will be looking to bounce back when they face Caulfield Grammarians this weekend.

Old Camberwell Grammarians led Williamstown CYMS at every break before the CY’s kicked five goals in the last quarter to Old Camberwell’s three to run out eventual winners by 12 points. Williamstown’s goals come from all over the ground, finishing with 10 goal kickers for the day making up for missing forward Nick Ebinger. Nick Adamson and Thomas Kanz combined for six goals for the Wells, but it proved too little as the CY’s depth continued to run into the dying minutes of the game.

Mazenod had only three more scoring shots than Caulfield Gramamrians on the weekend yet finished 48-point victors. Caulfield’s inaccurate kicking saw them with one goal and 10 behinds at half time, trailing by 29 points. Nick Thomas was best on ground for the Nodders, while Rees Thomas finished with four goals for the day. Louis O’Keefe always proves dangerous in front of goal, finishing with three of Caulfield’s five.

Old Ivanhoe Grammarians trailed by four goals before entering the last quarter where they piled on five majors to finish 12 points clear of Marcellin. Recruited from the VFL Northern Blues, Paul Colbert kicked four goals for his new club during their come from behind victory whilst last year’s Zachariah medalist, Carl Groth, found himself in hot water after being reported by two field umpires for forceful front on contact. Marcellin’s James Robertson finished the day with three goals whilst Jonathan Blanch did all he could for the Eagles. Marcellin may find it difficult to grab their first win as they face Peninsula in this weekend’s clash.

It was the one tip I got wrong for the weekend, which serves me right; how dare I tip against the Kew Bears? The just know how to win. Andrew Brazzale finished the day with six goals and James Corboy topped off his best on ground performance with four majors. The Bears found themselves down by one goal at quarter time before finding their feet and running away to a 52-point lead. The Bears showing everyone that there is no complacency at the club as they take aim at their fourth straight flag. Aaron Cloke continues his great form into 2016 with five goals for the Krushers.

This weekend brings on an exciting five games across Premier C. The match of the round is Old Ivanhoe vs Kew. Do Kew have what it takes to bring down Old Ivanhoe, who I consider to be a grand final side? If they are going to do it, this weekend is their chance, as OIG’s will be without last year’s Zachariah medalist, Carl Groth, who has accepted a two match suspension. Ormond and Caulfield will battle it out at E.E. Gunn Reserve which will be a see-saw encounter expected to go down to the wire. Mazenod will hope to continue their winning form into their clash with Old Camberwell but will need to pay some attention to Nicholas Adamson. Marcellin will be up against the odds as they face the in-form Pirates and will need to apply as much pressure as possible when in their defensive 50. The Pirates were the most accurate kick for goal in Round 1, kicking at 78% efficiency. The Krushers will look to continue their first half form into Round 2 when they face Williamstown CYMS.