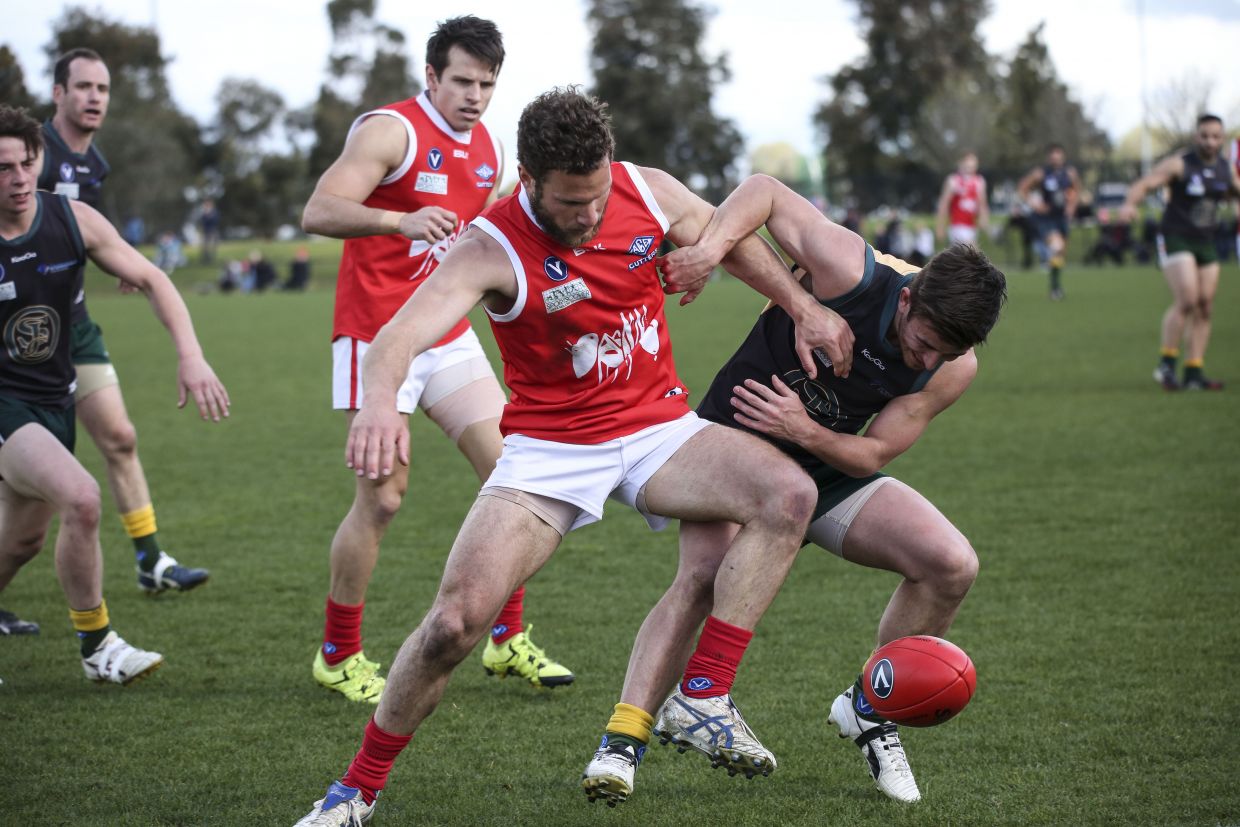 Fierce rivalries & the smell of menthol descends on Division 1

After a long wait, 2017 has finally arrived! We can now look back candidly on last season, which offered us action-packed Saturdays and a nail-biting Grand Final between Old Mentonians and Old Geelong.

Ogs took the hard road to the Grand Final, detouring via the Prelim. The extra weeks’ rest for the Panthers showed as they got off to flyer, taking a two-goal lead into quarter time. In the second quarter, Ogs turned the tables and booted six goals to two and that’s where the game was won. Both sides kicked five goals in the tense second half which saw Ogs hold on by eight points to snare their first flag in 11 years. Team of the year centre half forward, Callum Wood, was the brightest star on Grand Final day and took home the best on ground medal. It was an even contribution across the board from both teams, which resulted in the tense, competitive match we’d all hope for.

It’s sad to say goodbye to the previous year’s Grand Finalists, especially teams that boast local footy stars like ex-AFL player, George Burbury, and LS Pepper Medallist, Daniel Maitland. Unfortunately, we also had to say goodbye to Old Paradians and Prahran-Assumption who were relegated after spirited attempts to survive Division 1.

As we bid farewell to some old foes, we look toward the arriving clubs for newfound happiness. From Premier C, we welcome Ormond after a one-year adventure and extend our arms to Oakleigh after a 10-year run in the Premier grades.

Ormond will be disappointed they were relegated after just one year in the premier grade, but they must now look ahead to 2017. Senior Coach, Ash Lever, will want to remind the league of the 2015 season in Division 1 in which they won 17 games. 2016 best and fairest, Luke Gogis, will be missed if picked for Sandringham but some gun under 19 recruits along with Matt and Travis Hine from Mansfield will help Ormond consolidate as contenders for the flag.

Oakleigh will be gutted to be in Division 1 after 10 years in the Premier grades and will look to head back up as soon as possible. Coach Jamie Mollo will expect gun forward Aaron Cloke to once again dominate in front of goal. The loss of 2016 captain, and co-best and fairest, Dermot Cleary, is rough but multiple 19s recruits will headline a recovery. Oakleigh should be pushing for finals contention in 2017.

Up from Division 2 we offer a round of applause to Grand Final winners Preston who won their third flag in four years under supercoach George Wakim. Injuries sustained in the finals campaign forced retirements of important players, but they are confident that tapping into the talent of their solid 19s team will cover those losses. The midseason return of ex-TAC cup gun, Tindarra Hood, should help push Preston towards a successful 2017.

St. John’s will also be looking to make an impression in Division 1 after a strong season in Division 2. Coach Anthony Brannan will hope 81-goal juggernaut, Aaron Thornton, and standout Division 2 medallist, Glenn Costas, can match their output from last year. Strong recruiting over summer has St. John’s ready to step-up and push for promotion into the premier grades.

Of our six returning clubs, PEGS seem the most likely contenders for the flag in 2017 after making it into the second week of finals last year. Coach Dane Pound has the reins again and he’s bolstered his team with strong additions such as Adrian Romanyk, runner up in the RDFL league medal. Hugh Schiavello, a CHF from Kyneton, will look to pair up with gun Trent Skurrie and form an unstoppable forward line.

While Therry Penola made the finals last year they failed to make inroads. First year coach, Anthony Palmer, will want to evolve the strong club he has inherited into true flag contenders this season. Leading Division 1 goal kicker last year, Jarrod Bannister (77 goals), and several solid players have departed the club and they may struggle to cover those losses. Therry will want to capitalise on an injection of youth if they want to push for a premiership this year.

St. Mary’s Salesian missed out on finals last year and will be disappointed not to have lived up to expectations. Incoming coach, Erwin Leyden, has a big job ahead of him, filling the boots of the departing coach, Jess Sinclair, who coached the team to promotion in 2014. While they’ve lost some talent in 2016 best-and-fairest winner, Mitch Woods, they’ll look to promote players, such as the Bussell brothers, James Barrie and Nick Ludwig, from their 2016 reserves premiership side to fill the void. SMS has also managed to secure the services of key-forward, Jay Canterbury, who will look to combine with Manny Dolan to form a strong attack and push the Saints towards success in 2017. With a bit of a luck, St. Mary’s will be in amongst the finals conversation in 2017 and not fighting relegation.

In their first year after promotion, Ivanhoe finished the regular season in sixth place with eight wins to cap off a solid return to Division 1. Leigh Cole, in his second year back as coach, will look to capitalise on strong foundations set last season. While they struggled with recruitment in the off-season, losing seven players and gaining only few, they’ll be relying on growth from within to consolidate 2017. They have retained young guns, Reuben Blackmore-Moore, and dual best-and-fairest winner, Mitchell Lovell, who will look to dominate again in 2017.

Whitefriars finished one game clear of relegation and will want to improve on their 2016 output. Coach, Dean Thorne, will expect improvement across the board to help cover the loss of best-and-fairest winner, Sean Currie. The development of a strong group of juniors hopes to underscore their charge up the Division 1 ladder in years to come, 2017 will hopefully lay some foundations for future success.

Brunswick NOBSPC scraped through in 2016 after some spirited performances in August. They’ll look to use their form from the end of last year to fire them into 2017. Coach, Luke Mahoney, will be expecting big things in his second year after securing multiple strong recruits from higher grades over the summer. Former Kyabram District midfielder, Geremie Ganino, is expected to make a big impact and help push Brunswick towards the finals.

The familiar smell of menthol, strapping and new boots has us salivating over this season. Fierce rivalries and newfound nemeses await and I can’t wait to talk you through the tight battles and gossip-worthy debates of Div 1.