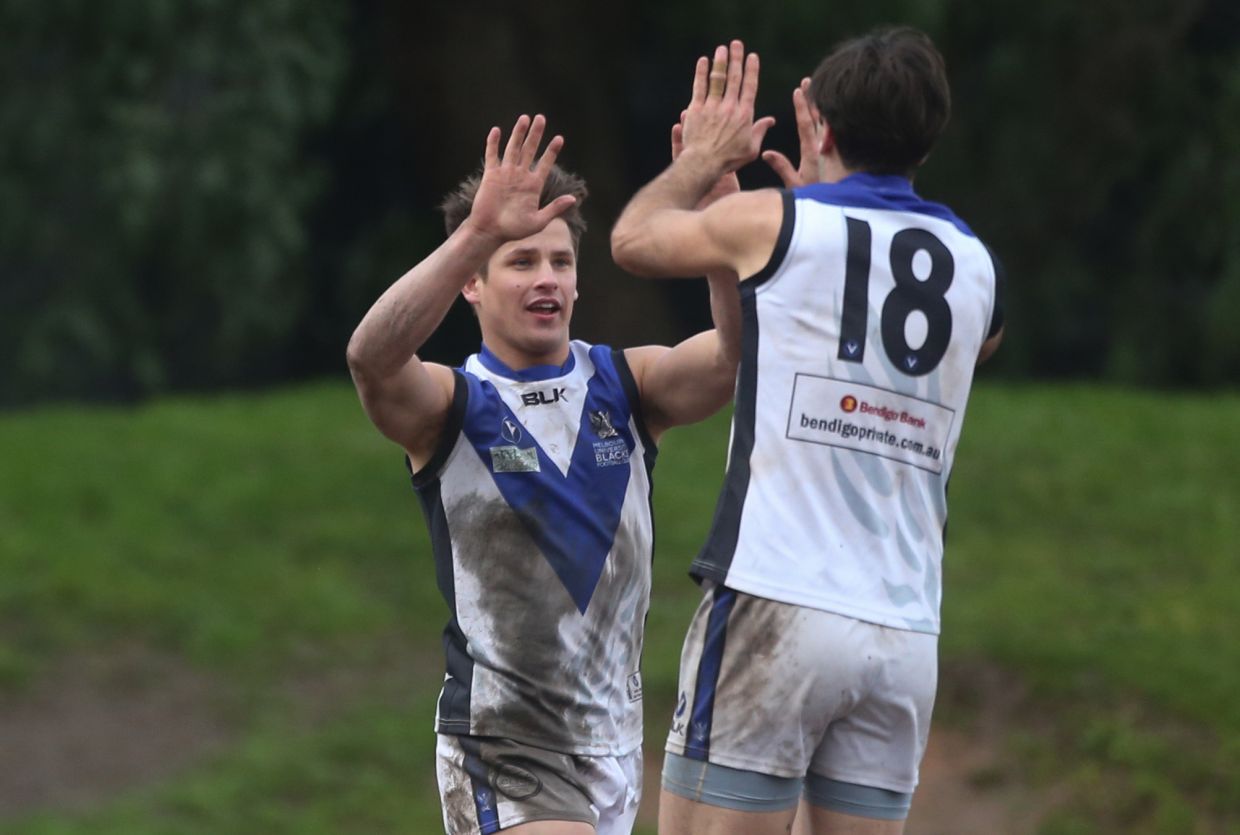 The fight for finals & struggle to avoid relegation took another turn in Round 15 of William Buck Premier football, with the top four now clear of those below them and just two games separating seventh and ninth.

In the unofficial match of the round, St Bernard’s narrowed the gap between themselves and Collegians in eighth and ninth position on the ladder when they defeated De La Salle by 28 points at Waverly Oval. The wind advantage to the scoreboard end played a role throughout the entirety of the match, with both defences under all sorts of pressure when faced with the combined headwind and barrage of inside 50s. It was all De La in the first term as they asserted themselves around the contest and sent the ball inside 50 18 times. However, those efforts were often thwarted by the Snow Dogs’ back six who, led by the returning Tom Caven, allowed just two goals from those forward thrusts. It was much the same for the next two quarters as the Snow Dogs drew even at the half and De La then took a 16-point lead into the three quarter time break, but six unanswered goals in the fourth meant the Snow Dogs secured their third win in a row and came to within one game of the Lions. Adam Bentick, Alex Boyse and Caven back in the Snow Dogs’ line-up makes the world of difference to their structures and ability to win the ball from the centre and they look more and more like the premiership-winning outfit from 2015. Tom Sullivan will likely not poll three votes but his two-goal effort after clearly re-injuring his ankle was inspired. Brendan Close was named De La’s best and his close-checking on Sullivan was as tight as they come, while Tom Humphrey, Sam Williams and the ever-composed Matt Fieldsend fought valiantly. They’ve has now lost five games in a row and fallen one win outside the top four. With their final three games against St Kevin’s (home), Old Melburnians (away) and Old Carey (home), there is an opportunity for the De La train to start rolling again toward September.

The third-term struggles are a distant memory for Old Trinity as they used the ‘premiership quarter’ to pile on six goals to one and effectively break open their match against Old Melburnians at Sportscover Arena. With just four points separating the two sides at the half, the T’s controlled most of the play in the second half as Ed Weatherson top-scored with three goals. It’s been a significant turnaround in the 30 minutes after the half time break for the T’s as they’ve turned a glaring issue into an overwhelming strength. From Rounds 8 to 11, the T’s averaged just one goal in the third term as they slumped to three losses and a tie. Conversely, they’ve averaged 4.75 goals per third term from Rounds 12 – 15, accounting for 34% of their overall score and helping them to four consecutive victories. And with Alex Polidoros, Seb Nicolosi and Gabe Hamilton to return, they are primed to secure a double chance. OMs weren’t without their positives over the weekend as they stuck with the T’s for the first half and even outscored them in the fourth. Oscar Hosking and Sam Peacock performed again and have arguably been their best two players in the past month. Nick De Steiger is another story completely as he continues his breakout year as one of the premier ruckman in the competition. Losing four of their past five means they sit a game and a half outside the four but they are comfortable two and a half games clear of relegation.

University Blacks nipped two consecutive losses in the bud when they defeated Old Carey by 79 points at Uni Oval and moved a game clear of De La in the four. As their rollercoaster season continues, there are numerous constants for the Blacks as Bede Mahon leads from the front, Josh Steadman toils away in the ruck and Lochy Dornauf provides spark as the most successful small forward in William Buck Premier (Gossy is mid-sized). Dornauf was joined by Jordan Quaile on the weekend as the two dynamos recorded four goals each for 57% of their side’s total score. Jack Harris received deserved plaudits as the Panthers’ most influential player, while Luke Crozier and chase-down king Jeremy Cator both played their part. They were held scoreless after half time but still possess the cattle to upset a team or two in the remaining three rounds.

University Blues and Old Xaverians are clearly two of the top three sides in the competition at this point in the season (as the ladder and recent form suggests), with both securing comfortable victories against St Kevin’s and Collegians, respectively.

The Xavs have now won six on the trot and continue to apply pressure to the Blues and T’s as they nip away in search of the double chance. Brendan Goss kicked five and took his season tally to 42, while Matt Handley (45) maintained an arm’s length on his teammate with two of his own. Either way, having the number one and two goal-kickers in the competition bodes excellently for the Xavs’ fortunes. Lindsay Apted and Courtney Hylton are two names VAFA audiences have grown accustomed to seeing in the Lions’ best and both continued that tradition with standout performances. However, their fourth consecutive loss mean the Lions are just one win above the Snow Dogs in the race to avoid relegation, and may need to win at least two of their next three against Blacks, the Panthers and OMs.

There’s not too much else to say about the Blues; their defence is ranked number one in William Buck Premier and allow just 55.2 points against, their midfield is star-studded with Marshall Rippon, Jeremy Mugavin, Clayton Hinkley and a host of other talents, and their forward line functions incredibly proficiently (27 scoring shots vs SKOB) without Tim Gaeppen. Anthony Lynch led well for SKOB, while Steven Salopek went one step closer to a club best and fairest award with two goals and a bevy of possessions. The loss was SKOB’s first in three rounds and ‘probably’ ends their finals run. While it is mathematically possible, they’re two games outside the four and come up against De La, the T’s and the Snow Dogs on the run home.