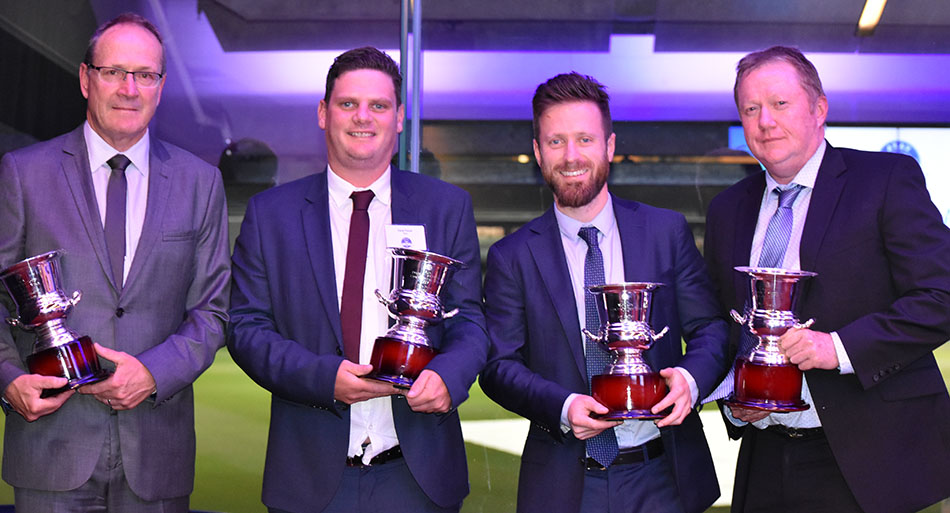 Old Brighton senior coach, Greg Hutchison, has been rewarded for his outstanding season as the 2017 VAFA Premier Sections Coach of the Year at last night’s VAFA AGM Awards Night.

In his third season at the helm, Hutchison was the architect behind the Tonners’ near-flawless premiership campaign in Premier B, losing just one game en route to a 36-point grand final victory over Old Scotch.

His defensive structures were the envy of all others as the Tonners averaged a mere 49.9 points against for the duration of the home and away season, resulting in seven more wins (16-7) than 2016. They were equal-second for points per game behind the Cardinals and their 20-year-old co-captain, Harry Hill, was crowned GT Moore Medallist with 25 votes.

Dane Pound was awarded this year’s Division Sections Coach of the Year after the Bombers completed the most impressive grand final comeback in recent memory and claimed the Division 1 flag.

Trailing St Mary’s Salesian by 57 points early in the second term at Box Hill City Oval, the Bombers kicked 15 goals to six in the final three quarters and ran out 13-point victors.

Pound accepted the senior coaching position two years ago after a one-year stint as co-coach in 2015, leading the Bombers to the preliminary last year and back into Premier C for 2018.

Despite never having held a senior coaching position, Stafford galvanised a newly-formed group of women’s players and led them to the first-ever William Buck Premier flag against SKOB Saints.

The Sheagles finished the home and away fixture in third position on the ladder but defeated Old Trinity and Fitzroy-ACU before edging past the Saints by seven points in the decider at Sportscover Arena.

After first claiming one of the two pre-season Lightning Premierships, the Sheagles had 42 registered players and feared they would lose numbers if they were to compete in the Premier section.

However, Stafford and his coaching staff made it a priority to engage each and every player throughout the season, culminating in a strong club culture and premiership success.

Earlier in the night, Paul Deegan was presented with the U19 Coach of the Year Award after leading both Mazenod’s Section 4 men and Development Division 3 women to grand final success.

The Nodders’ U19s lost just two games under Deegan throughout the season and claimed the flag via a comprehensive 48-point win over PEGS.

Deegan is renowned for his communicative skills and high standards, inclusivity and his focus on engaging parents in all aspects of the club.

The VAFA congratulates all four winners on outstanding seasons at their respective clubs.