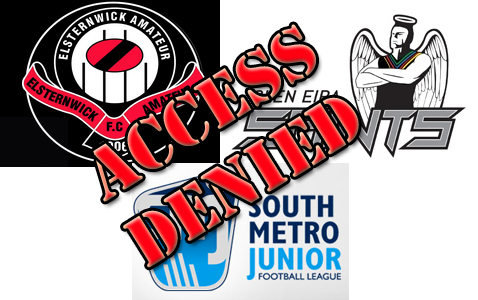 VAFA clubs Glen Eira and Elsternwick were both denied admission to the SMJFL to commence junior teams in a vote at the SMJFL AGM last night.
Glen Eira and Elsternwick along with Southern Football League club Black Rock all were seeking to commence junior teams in the SMJFL for the 2015 season and beyond, but SMJFL member clubs voted against the admission of all three clubs.
Glen Eira Saints President, Ivan Delac was at a loss as to how the vote had turned out.

“We see the development of a junior club vital to the sustainability of our club, there is also a demand for a junior club at Glen Eira and certainly I am aware that Elsternwick have a similar demand, it is staggering in this day and age that member clubs can control the destiny of a whole football competition” Delac told vafa.com.au.
Elsternwick President Mike Convery was equally disappointed.

“The arguments the clubs put up were nonsensical, it was laughable really” said Convery.

“We must say the Board of the SMJFL and the administration were just fantastic and we have no qualms with them.

“However, the self interest of clubs and the structure that sees them control a situation such as this is a poor reflection on the way certain people in community football can prevent other like minded people from engaging with a local community that would like to see us develop and foster a junior club” said Convery.

Elsternwick, despite opposition, achieved 20 votes, while Glen Eira had 17 votes.  The total number of voting clubs is 34, with 26 votes in the affirmative being the magic number for success.
The VAFA was supportive of both clubs establishing junior clubs and championed the cause of both Glen Eira and Elsternwick.
VAFA CEO Michael Sholly has spoken with the General Manager of AFL Victoria, Steven Reaper and expressed disappointment that it appeared that clubs were voting in collusion.

“I have sent a letter to the SMJFL General Manager, outlining my disappointment and the fact there is a wider problem that requires immediate and serious attention. Unfortunately given the current structure of the SMJFL Constitution, giving considerable powers to member clubs on new club applicants – the odds of achieving entry into the SMJFL is slim to none” said Delac.
Glen Eira has sought legal advice, however they were told there was no direct avenue for legal action.

“It is fascinating there is no right of appeal anywhere for these types of situations.”

“We are two VAFA clubs doing all the right things, looking to grow our clubs & develop the game within our region” said Delac.
As far as what can be done, Convery said all they could do would be to keep trying.

“We will apply again next year, try to find those six extra votes we need and perhaps hopefully in that time the SMJFL might be able to gain control of determining who comes in and out of their competition” said Convery.

Delac was stronger, “We will now seek a meeting with AFL Victoria to discuss the issues at hand and hopefully find a way forward.”
This was the second attempt by Glen Eira to have a junior club admitted to the SMJFL and the second time the vote turned them down.

“Last’s night’s outcome is simply unacceptable & something must be done.” Delac said.