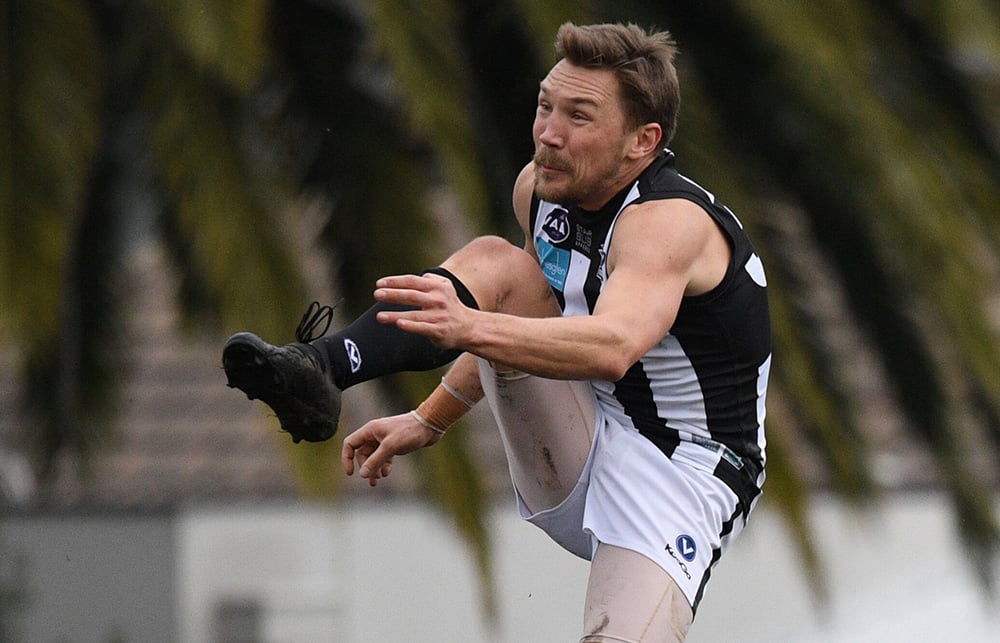 The Hoers got it done at the College against the Bloods, but only by 11 points. Aquinas started strongly and headed Ivanhoe at the main break with the match evenly poised. For Aquinas Aver, Dwyer, Burdett and Livingstone were in everything. Inaccuracy plagued both sides in the third term as both teams looked to take the ascendency. An inaccurate Ivanhoe unit however finished the stronger with 8 shots on goal to 4 in the last to claim an important away win. Thomson (4), Tansley (3) and Kyriacos key Hoers throughout the day.

An inaccurate Old Paradians unit always kept their heads in front at the Garvey and ran out 27-point winners. Leading at every change and with Girolami and Mitris again doing the damage, with the support of Bibby and Nolan (3) the OP’s cement themselves firmly in the four after a strong month of footy. Coach Phil Plunkett has the men from Bundoora humming and the next (3) weeks will certainly set the scene for the remainder of the season as they come up against a few teams around the same mark. For the visiting Yarra Old Grammarians Pollard, Young and Owen were prominent, although recent slow starts will be of concern.

An inexperienced Bullants unit were no match for a rampant MHSOB as they went down by 135 at the High School. Despite the best efforts of Edsall, Dakin, S Harisiou and Parris for Bulleen-Templestowe they were never really in the hunt. An 8 goal to 1 opening term told the story of the day with the Unicorns having another day out on the scoreboard. Wijayakumara (6) and Hanley (5) finished off the great work of the consistent Suhr, Littore and Cook for the home team who get set for an important 3 weeks ahead to round out the first 9 games.

Manningham Cobras went to work from the first bounce and never allowed Power House into the contest at any stage with a 73-point win. With winners on every line and key targets up forward Maghamez (7) and Raso (6) having a field day, the home team were powerless in their efforts to challenge at any stage. Keltie, Norris and Muller were in everything for the Cobras who remain in the hunt for a top four position. For the vanquished House Circosta and the consistent Scotlands never gave in.

Glen Eira sounded its first warning at home against West Brunswick. If the Westies were going to be a challenger they certainly left Packer Park in the knowledge of who is the yardstick of the competition. The Gryphons bounced out of the blocks with 12 shots to 3 in the first quarter and if it wasn’t for an inaccurate second term – where the Gryphons added 3.8, the game could well have been over at half-time. A 10 goal to 2 second half certainly gave all other teams in D2 a warning that the boys from Packer Park mean business this year. For the Westies the consistent Dillon, Yacoub, Blakers and Jones gave their all, but to no avail. An even team performance from the ladder leader with Drenth (5) amongst the goals while D’Agostino, Pound and McDonald continue to have great years. Barda with 2 majors in his 200th also made the most of his opportunities.