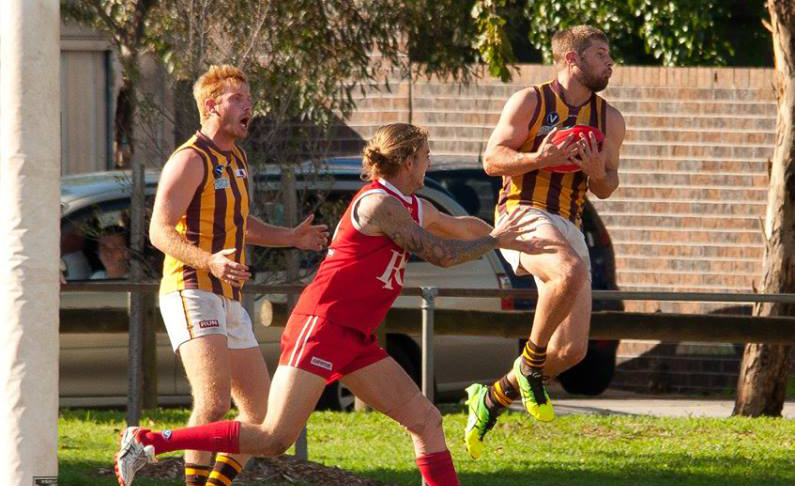 As we wrap the last round of the regular season the final ladder positions are set. The Minor Premiership was decided in a compelling battle between our heavyweights at the top that might have been a Grand Final preview. We say congratulations to Mitch Gleeson as the La Trobe spearhead has sewn up the goal-kicking race and we say good luck to our departing clubs. Let’s check out the games…

La Trobe have used another stellar defensive performance to dismantle Aquinas by 94 points, 114-20, and finish the regular season in third place. Holding the Bloods goalless through three quarters the Trobers piled it on at the other end kicking away to record another convincing win. Mitch Gleeson wrapped up the goal-kicking race in style adding six majors in the rout to finish the season with 75 goals, 12 more than his closest rival. La Trobe have continued this devastating vein of form and could pose a major obstacle for the two at the top of the ladder in the Finals. For Aquinas it brings to an end a very difficult campaign that will see them fall to Division 4 in 2017, hopefully we see them again in the not too distant future.

It was an incredible 10-goal second quarter that Canterbury has used to propel them to a 119-point thrashing of Parkside, 195-76, in both teams’ final hit-out of the season. Tumbling out of the Finals picture in the past few weeks the Cobras looked to inflict all their remaining venom upon the Red Devils. After a tight first quarter that saw the team’s separated by only two points, Canterbury exploded in the second term to blow the lead out to 55 points at the half-time break. It was much of the same in the second half as the Cobras added another 15 majors to only five from Parkside. Another tough day on the oval for Parkside in Division 3, they will now look to a solid season in Division 4 next year to regain their lost confidence.

It was a stirring final term comeback that saw South Melbourne defeat Swinburne University by 3 points, 70-67, at Lindsay Hassett Oval. Stumbling out of the gate, the Swans trailed Swinny at every change, falling behind by 17 points at the three-quarter time break but with a fourth quarter challenge ahead of them the Finals bound Swans responded. Ramping up their defensive pressure, South Melbourne held Swinburne to a lone behind while being able to record three goals of their own to wrestle back the lead and hold on for the impressive victory. It was a game that epitomises Swinny’s season, another winnable game slipped from their grasp, it has been these inconsistent performances that have cost them a spot in September. Something to overcome next year.

Don’t tell Albert Park it was a dead rubber as the Falcons surprised the Finals contender UHS-VU by six points, 74-68, at Beaurepaire Pavilion. Playing with nothing to lose Albert Park benefitted from the Vultures poor kicking in front of the big sticks booting 12 behinds in the first half which meant the Falcons held a narrow nine point at the break. However the Vultures showed why they are a Finals contender as they fought back and took the lead in the third quarter but it was a brief lead. As the Vultures couldn’t stop the final term charge by Albert Park where they recorded four goals and 11 behinds and won the game. UHS-VU now faces the tough test of trying to score against the ferocious La Trobe defence in week one of the Finals.

Hawthorn has taking the title of Minor Premiers as they proved too strong for Glen Eira defeating them by 18 points, 83-65, at Packer Reserve in what might be a Grand Final preview. In a battle of the heavyweights it was the Saints who threw the first haymaker taking the opening term but the Hawks weren’t ready to stay on the mat. Fighting back in the second quarter with six goals to take a commanding 26-point lead at half-time. After the break, the Hawks continued the pummelling on the Saints taking the third quarter in a tough contest but it had done the damage, going on to lose the final quarter but win the match. The two squads have been the best teams all season long and Hawthorn has tied the ledger at 1-1 with the win, the next match-up might be in the last Saturday of the season.

In their final tune-up before the Finals, Power House has dominated Elsternwick by 58 points, 121-63, to record their sixth straight victory. After keeping the Wickers goalless in the first quarter, Power House continued the misery for Elsternwick keeping them to only a single major while kicking 10 goals of their own. Power House didn’t let up after main break extending the lead to 86 points by the end of the third term, before cruising to the crushing win. Power House have shown over the past month of footy that the can definitely kick a winning score, if their defence can stand up to the challenge of Glen Eira’s attack they might be a chance at the upset.

After 18 rounds we now head into the business time of the season. Power House is playing amazing, full of confidence and will look to cause the first upset. Although a frustrated Glen Eira after seeing the minor premiership slip from their grasp will be too strong. The rampaging Hawthorn will host the pesky Swans in the opening round but the Division’s top scoring squad will have too many weapons for the travelling outfit. In the final game, La Trobe will rely on their suffocating defence to handle the UHS-VU Vultures and advance one step closer to the title. Can’t wait.