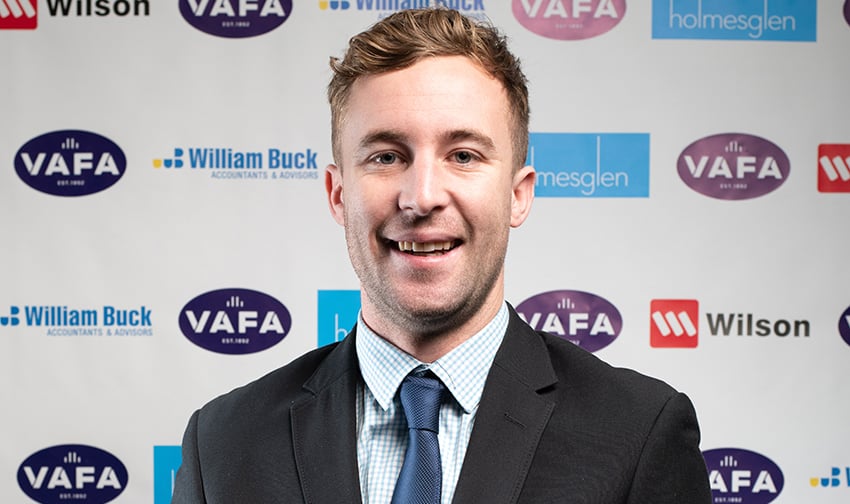 The VAFA wishes to advise Haydn O’Connor will step down from his position as Umpire Operations Manager after accepting the role of Community Umpire Development Manager with AFL Queensland.

Haydn, who joined the VAFA staff in January 2018, has enhanced many aspects of the VAFA umpiring department during his tenure; including, strengthening the pathway between the VAFA and SMJFL and YJFL, restructuring the field umpiring appointments to give more opportunities at senior level and administrating the move back to Elsternwick Park after its redevelopment on new training nights.

He oversaw the structure of a new three-year pay deal which includes increases for all umpires over last year and the next two seasons, while giving umpires of all disciplines opportunities to travel interstate and be a part of the Big V Program.

“His thorough approach, ability to implement processes and execution of new initiatives leaves the VAFA umpiring department in an outstanding position moving forward. We will miss his caring nature, enthusiasm and sharp wit,” he said.

VAFA CEO Brett Connell thanked Haydn for “his significant contribution to the VAFA over his two-year tenure as Umpire Operations Manager”.

“We wish Haydn all the very best in his future and applaud his drive and courage in pursuing a new venture in Queensland,” Brett said.

Prior to his employment at the VAFA and following an umpiring stint at the VFL, Haydn decided to come to Elsternwick Park to continue umpiring at the premier competition in community football. In his two seasons with the VAFA, Haydn umpired the 2016 William Buck Premier Grand Final & representative game vs South Australia, and in 2017 backing up with the same two appointments, this time the representative game against AFL Vic Country.

At the completion of the season Haydn was awarded the Umpire of The Year and as a result joined the VAFA as the touring umpire to Ireland with the Big V.

Haydn will finish up on Thursday 21 November and we thank him for everything he has contributed to the VAFA.

In light of Haydn’s departure, the VAFA will soon be advertising to fill the role of Umpire Operations Manager. Stay tuned to VAFA Media for updates.