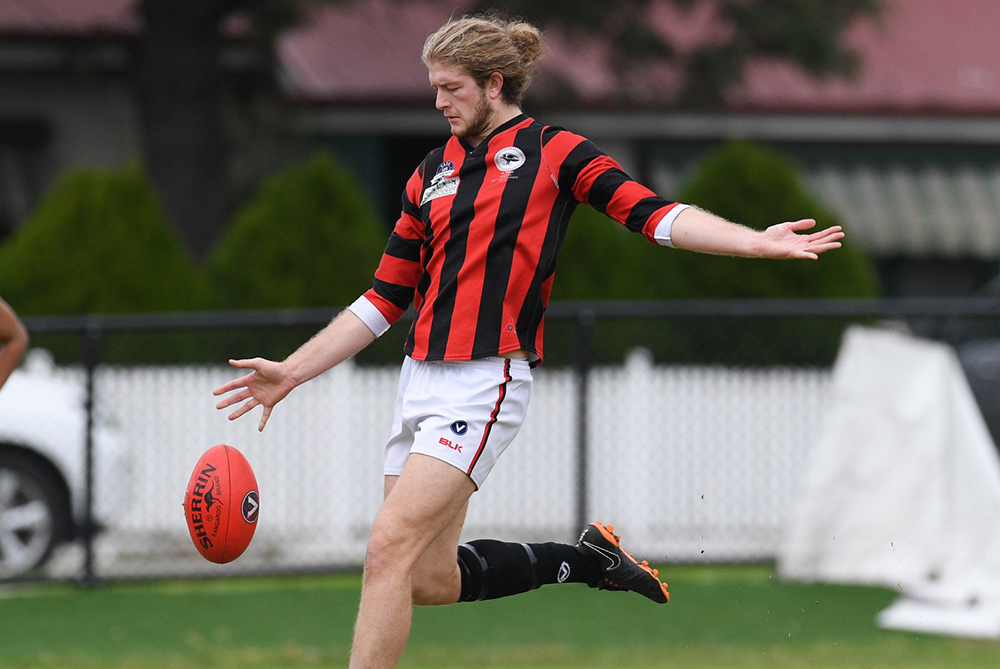 In what was penned as one of the safer tips of the round, Eley Park have fallen seven points short to South Mornington in a thriller at Whitehorse Reserve. Evidently forgetting their kicking boots from the get go, the Tigers kicked nine points in the opening term – precedence for their eventual 5.24 for the match entirety. Though more accurate in front of the sticks, slotting 6.11 with Jayden Pritchard (2) the only multiple goal-kicker, the Sharks’ fewer opportunities in front of goals (17) comparatively to South Mornington (29) proved ultimately detrimental. Lachlan Prins (2) and Jason Bland were two of the Tigers best in this big win, while Terrence Dingeldei took out the BOG honour.

Leading at every change of ends, South Melbourne Districts got the job done by 27 points over Box Hill North in Round 16. Boosting his goal tally to 17 for the year, Jordan Heis’ bag of five, accompanied by Ciaran Clancy’s three majors, were paramount in the Swans win. At the other end, Damon Earp nailed four goals for the Red Devils, while teammate Sam Kenna’s tireless efforts earnt him the BOG accolade for the day.

In what was a probable finals insight for Division 4 this year, Albert Park got the better of Elsternwick to the tune of 11 points at the Wickers home deck in Elsternwick Park (Oval 2). Much like South Melbourne’s result, the Falcons had the upper hand at every break thanks to the standout performances of James Brick (4), Matthew Corstorphin and Ben Plozza. Nevertheless, the Wicks did boast the superior accuracy in the final term, booting 3.1 to Albert Park’s 2.4, but the gap proved too large for Kyle Van Der Pluym (BOG) and co. to overcome.

A come-from-behind victory saw La Trobe University pip Masala Dandenong by three points in Round 16. The Tigers started with a bang at the La Trobe home ground, amassing 6.5 to the home side’s 1.1 in the opening quarter, before the Trobers wrestled back momentum in the second to trail by 21 points at the half. Had Masala Dandenong straightened up earlier in the piece, resulting in a more accurate score than their 8.10 at 3QT, results could’ve almost certainly tipped in their favour. Undoubtedly elated with their eventual win, Bailey Zimmermann (3) and Simon Denier (2) dobbed five of the Trobers eight majors, and Andy Castles was chosen as the Uni side’s best.