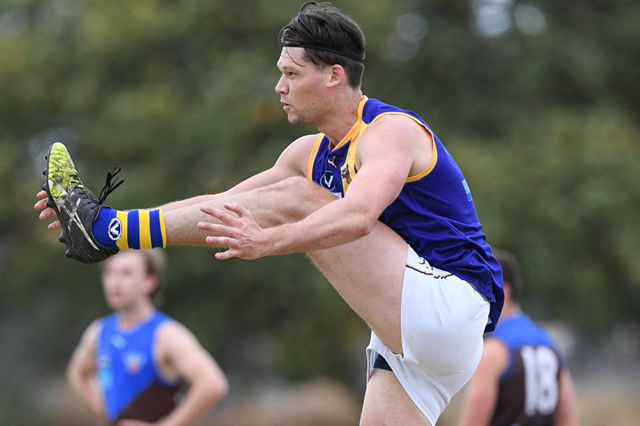 Hampton Rovers held off PEGS in a 25-point win at Boss James Reserve in Round 8. PEGS looked fierce, bringing the game right to the Rovers with a six-goal third quarter, effectively outscoring the home side to give themselves a nifty 11-point lead to enter the fourth. The Bombers were unable to maintain their momentum, however, as Hampton took over with seven goals to their one, and run out the match. 12 Hampton players hit the scoreboard in their fourth win for the season, with Matthew Rieniets booting three and Josh Broadley named BOG. Jarryd Rogers was impressive for PEGS with three goals. Next round, Hampton will face Williamstown CYMS at Fearon Reserve as they try and do what no team has done this year. PEGS Sporting Fields awaits a competitive clash when PEGS take on Ajax in Round 9. Both sides sit in the lower half of the ladder, and will believe they can win it.

Mazenod earnt themselves a strong win by 47 points over Old Mentonians without much hassle at Central Reserve. Slowly but surely, the Nodders took control of the contest, starting with a small lead at the first term which continually increased at every break to upset the higher ranked Panthers. The Panthers were simply unable to get their footing in the contest and the Nodders were able to capitalise as they inflicted Old Mentonians with their third loss in four games. Jarryd Raffa was outstanding for Mazenod with four goals and the best on ground accolade. Thomas Morecroft was strong for the Panthers. Mazenod has a lot to be happy about going into their contest against Old Ivanhoe Grammarians (3rd) at Chelsworth Park, so don’t be surprised if they are able to topple another top side in Round 9. Old Mentonians will look to bounce back next round when they host Old Camberwell Grammarians at Keysborough Playing Fields.

Sitting comfortably on the top of the Premier C ladder, Williamstown CYMS overcame Marcellin at Fearon Reserve by 33 points in Round 9. The CY’s got off to one of their patented starts with a 50-point buffer courtesy of nine unanswered goals in the second quarter. A script flip in the second half saw Marcellin in control with eight goals to five, but it was not enough to dethrone Williamstown CYMS. Lachlan Fairley kicked three majors and Nicholas Blackney continues his impressive form with another BOG performance for the CY’s. Joshua James stood out for Marcellin. Downer Oval will host Williamstown CYMS v Hampton Rovers in Round 9, as the CY’s hope to remain undefeated in a game they would be confident heading into. Marcellin will travel to E.E. Gunn Reserve to face Ormond as both underdogs look to remain in the top half of the ladder.

39 points was the difference when Ormond defeated Ajax at Gary Smorgon Oval on the weekend. Only one-point was the margin at half time and the stalemate continued through to next term as the margin remained the same. In what was an extremely tight affair for the opening three quarters, Ormond found the key to victory in the fourth to shut down a noble performance from the Jackas. The Monders booted six goals straight in the fourth, whereas Ajax couldn’t find the goals, moving Ormond to six wins for the season. Simon Buckley had a day out with five goals and Matthew Oaten was named Best on Ground for the Monders. Dov Paltiel from Ajax was their best. Ajax hit the road to face PEGS in a contest too close to call with a lot to gain. Round 9 will also see Ormond face Marcellin from the comfort of home turf in a good test for these two top half sides.

In a thriller nobody expected, Old Ivanhoe Grammarians will be grateful they got the better of Old Camberwell Grammarians by the slimmest of margins; 1 point. The Wellers came out and brought the game to the Hoers in a contest that had both sides and fans on their toes. Each break was in favour of the Wellers but In a theme all too common in this section, Old Ivanhoe took control in the fourth with four goals and settled the contest in extraordinary fashion. Old Ivanhoe’s Kane Veliou put on a BOG performance and Hamish Matheson, Michael Del Monte, Richard Skok, and Jack Welham all scored two majors. Nicholas Benson was best afield for the Wellers, while Scott Kaiser and Andrew Parker booted three. After a good effort in Round 8, Old Camberwell will feel confident in their contest against Old Mentonians who have fallen out of form. Chelsworth Park will host an exciting clash between Old Ivanhoe Grammarians and Mazenod, with both teams eager to stack up the wins.